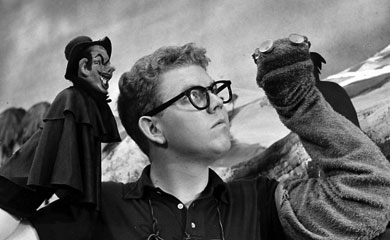 Revered satirist and actor Stan Freberg died April 7 at the age of 88. His body of work included more than 400 voiceovers for Warner Bros. animation, comedy albums, TV shows like Time for Beany and The Chun King Comedy Hour, and funny commercials for which he won 21 Clio Awards. Time magazine said his 1961 album Stan Freberg Presents the United States of America may have been the “finest comedy album ever recorded.”

He extolled the power of radio advertising in this unforgettable bit —

PAUL FREES: Radio? Why should I advertise on radio? There’s nothing to look at, no pictures…

STAN FREBERG: Look, you can do things on radio you couldn’t possibly do on tv.

FREES: That’ll be the day.

FREBERG: All right, watch this…ahem, okay people, now when I give you the cue, I want the 700 foot mountain of whipped cream to roll into Lake Michigan, which has been drained and filled with hot chocolate. Then the Royal Canadian Air Force will fly overhead towing a 10-tom maraschino cherry, which will be dropped into the whipped cream to the cheering of 25,000 extras. All right – cue the mountain!

Freberg was inducted into the National Radio Hall of Fame in 1995.

He also believed in humorous TV commercials and is remembered for taglines like “Today the pits; tomorrow the wrinkles. Sunsweet marches on!,” and Contadina’s “Who put eight great tomatoes in that little bitty can?”

In the Sixties, Freberg put Ray in one of his Sunsweet Prunes commercials. Freberg ‘s narrator praises Ray’s power to predict the future as Ray repeatedly interrupts, “But I never mentioned prunes in any of my stories!”

The two friends had a reunion in the aisles at the 2009 Comic Con when Freberg was 82 and Bradbury was 88 — both made the rounds in wheelchairs. Just a few years later Freberg was among the speakers at Comic Con’s Bradbury memorial (2012). 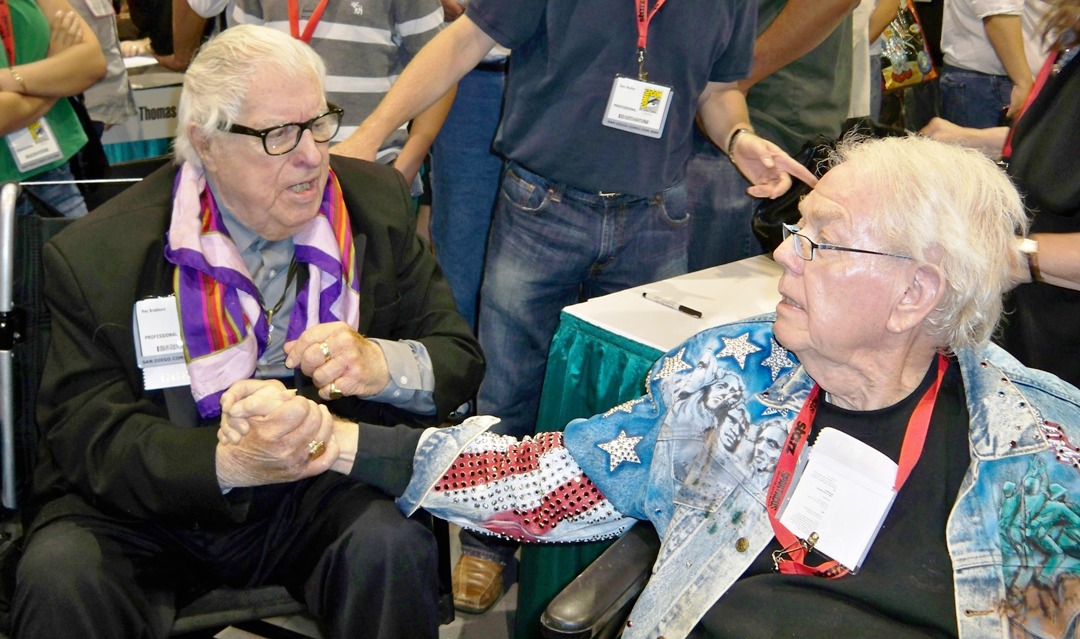 Jerry Beck recalls, “He thanked me, often, for giving him credit in print for all the Warner Bros. cartoons he had a part in. He had been miffed that he was unable to get screen credit (Mel Blanc had an exclusive credit by contract) – save for one classic Friz Freleng short, Three Little Bops (1957).”

Stan was the guy who’d been at it the longest. He recorded his first cartoon voice roles in 1945 for release in 1946. As far as I know, his last job was in an episode of The Garfield Show I voice-directed last year. It’s currently scheduled to run on Cartoon Network this October, giving Stan a career span of 69 years.

Once when Frank Sinatra toured Australia, he took along Freberg as his opening act.

Freberg’s first wife, the former Donna Andresen, died in 2000. In addition to his son, Donavan, he is survived by his wife, Hunter; his daughter, Donna Jean; and one granddaughter.

Update 04/11/2015: Corrected info about Bradbury introducing Freberg to his wife — it was Donna that Ray introduced to Stan.