Here are the descriptions and images in the press release. 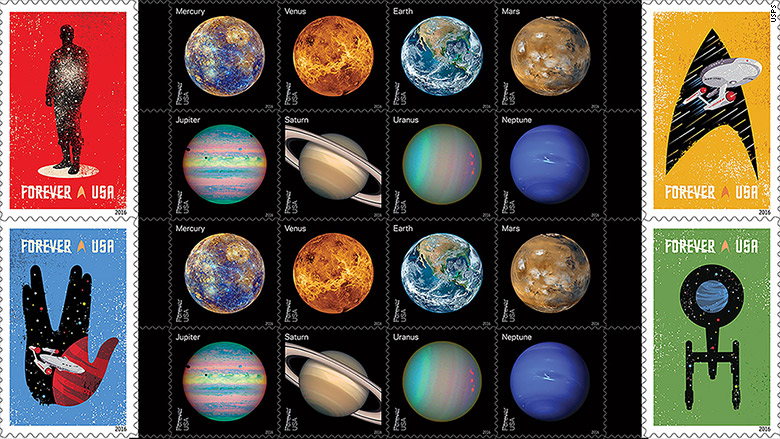 Views of Our Planets

With this pane of 16 Forever stamps, the Postal Service showcases some of the more visually compelling full-disk images of the planets obtained during this era. Eight new colorful Forever stamps, each shown twice, feature Mercury, Venus, Earth, Mars, Jupiter, Saturn, Uranus and Neptune. Some show the planets’ “true color” — what we might see if traveling through space. Others use colors to represent and visualize certain features of a planet based in imaging data. Still others use the near-infrared spectrum to show things that cannot be seen by the human eye invisible light.

The verso text, or text on the back of the stamp pane, explains what these images reveal and identifies the spacecrafts and powerful telescopes that helped obtain them. Antonio Alcalá of Alexandria, VA, was the art director and designer of the stamps. The stamps will be dedicated between May 28 and June 4 at the World Stamp Show – NYC 2016 at the Jacob Javitz Center

The words “SPACE… THE FINAL FRONTIER,” from Captain Kirk’s famous voice-over appear beneath the stamps against a background of stars. The stamps were designed by Heads of State under the art direction of Antonio Alcalá. 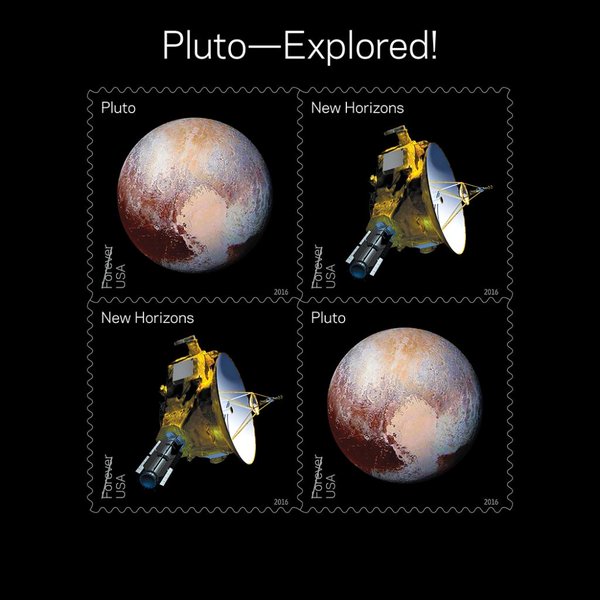 In 2006, NASA placed a 29-cent 1991 Pluto: Not Yet Explored stamp in the New Horizons spacecraft. In 2015 the spacecraft carried the stamp on its history-making mission to Pluto and beyond.

“The New Horizons project is proud to have such an important honor from the U.S. Postal Service,” said Alan Stern, New Horizons lead scientist from the Southwest Research Institute in Boulder, CO. “Since the early 1990s the old, ‘Pluto Not Yet Explored’ stamp served as a rallying cry for many who wanted to mount this historic mission of space exploration. Now that NASA’s New Horizons has accomplished that goal, it’s a wonderful feeling to see these new stamps join others commemorating first explorations of the planets.”

The souvenir sheet of four stamps contains two new stamps appearing twice. The first stamp shows an artists’ rendering of the New Horizons spacecraft and the second shows the spacecraft’s image of Pluto taken near its closest approach.

The view — which is color enhanced to highlight surface texture and composition — is a composite of four images from New Horizons Long Range Reconnaissance Imager (LORRI), combined with color data from the imaging instrument Ralph that clearly reveals the now-famous heart-shaped feature. Antonio Alcalá was the art director. The stamps will be dedicated between May 28 and June 4 at the World Stamp Show – NYC 2016 at the Jacob Javitz Center. 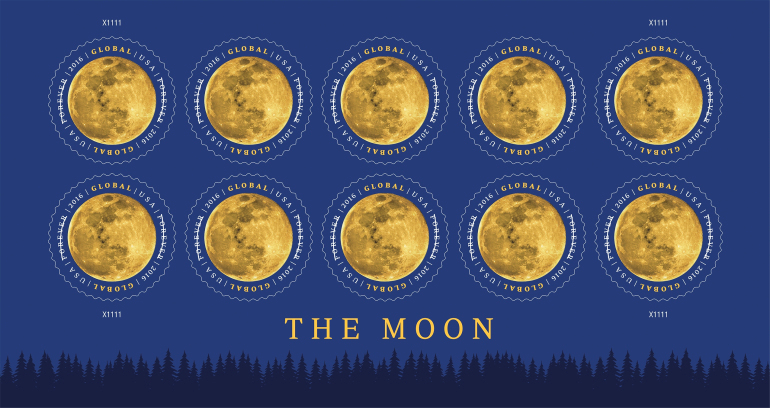 Taken as the full moon rises, the image captures the brilliant surface of earth’s only natural satellite.

A full moon occurs approximately every 29.5 days when the moon is opposite the sun, with the earth between the two. Since the rotation and orbit periods of the moon are the same, the same part of the moon is always seen from Earth.

Issued at the $1.20 price, this Global Forever stamp can be used to mail a one-ounce letter to any country to which First-Class Mail International service is available. Greg Breeding designed the stamp under the art direction of William Gicker.

[Thanks to Taral and John King Tarpinian for the story.]