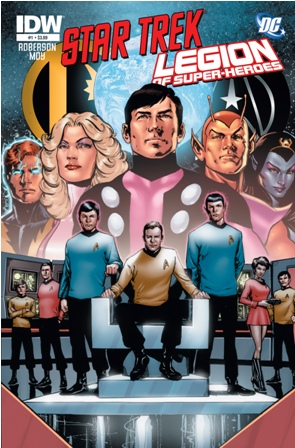 The original crew of the Starship Enterprise will join forces with the Legion of Superheroes in the DC Universe when IDW Publishing begins a new six-issue monthly series this October.

You can always count on a glitch in the ship’s transporter to plant the Enterprise crew in the middle of a crisis. (It’s a wonder people ever willingly step into the thing.)  As the press release explains:

STAR TREK/LEGION OF SUPERHEROES tells the tale of the original crew of the Starship Enterprise, who beam down to a planet only to discover that the planet isn’t their intended destination, or even in the right universe…

Where they end up the “United Federation of Planets… is now the Imperial Planets of Terra, a dark empire focused on war and conquest…” No mention whether they encounter a mirror Spock in a goatee, but we can hope.

If they ever do another of these I’d like to send a different set of DC superheroes on an adventure with the crew of the Enterprise. Let’s return to “The City on the Edge of Forever.” Edith Keeler’s 1930s, Depression-era New York is the perfect place for Kirk, Spock and McCoy to join Batman and Superman battling gangsters and mad scientists.

Or here’s my other idea — imagine Spock at the controls of his breadboarded transporter, vacuum tubes glowing, as he tries to save baby Kal-El’s capsule from entering Earth’s atmosphere…

(J.J. Abrams, I am available to consult if any of this is working for you.)

5 thoughts on “Star Trek/Legion of Superheroes Pair Up”