Though are you honestly surprised to see people writing about Ep. VII in terms usually reserved for jalapeño-and-pickle ice cream? Weren’t you a bit disappointed with the last round of sequels? Did Jar-Jar Binks float your boat?

That’s why people were already walking their bomb-sniffing dogs around the Star Wars franchise when last week’s cast announcement revealed that John Boyega, Daisy Ridley, Adam Driver, Oscar Isaac, Andy Serkis, Domhnall Gleeson and Max von Sydow will join the stars of George Lucas’ original saga, Harrison Ford, Carrie Fisher, Mark Hamill, Anthony Daniels, Peter Mayhew and Kenny Baker. J. J. Abrams had played coy about bringing back the stars of the original trilogy, but we knew they were on the way – didn’t each of them apologize for leaking the secret at some point? That only left us to wonder how these vintage actors would be deployed, and whether Ep. VII might be the most geriatric sf movie since Cocoon.

The movie hasn’t even been made yet and Grantland’s Emily Yoshida, asking “Can a ‘Cool’ Actor Survive Star Wars?”, worries that the careers of some of her young favorites may never recover from the way they’ll be used.

Oscar Isaac and Adam Driver, fresh off cred-building turns in Inside Llewyn Davis and Girls, respectively, are cool, but yesterday’s Star Wars casting announcement is a great disturbance in the force of their respective careers. I don’t really care to postulate about what kind of characters they’ll be playing (Driver is said to be taking the villain role; I’m mostly curious about how the J.J. Abrams–helmed third trilogy will benefit the actors it employs. Were George Lucas still at the wheel, it would most certainly spell doom, but we’re in uncharted territory now. Maybe Abrams’s Star Wars ends up supplanting Game of Thrones as the geek thing that it’s OK for normies to like, or maybe it devolves into a fan-service sausage fest.

Speaking of “sausage fest,” the cast announcement triggered the mandatory gender census and io9’s Annalee Newitz required just one finger to count the new female characters being introduced in Episode VII. Wrote Newitz: “It’s as if 51 percent of the population cried out in pain, and was suddenly silenced.”

Last week’s news having attracted so many sharks, one must admire Disney CEO Robert Iger’s fearlessness in announcing to a shareholders meeting that three Star Wars spinoffs could arrive in theaters in 2016, one year after Episode VII —

Variety also reports that screenwriters Lawrence Kasdan and Simon Kinberg are currently working on the scripts for the spin-offs. While rumors indicate that the features will focus on Han Solo and the bounty hunter Boba Fett, no plot details have been officiallly confirmed. 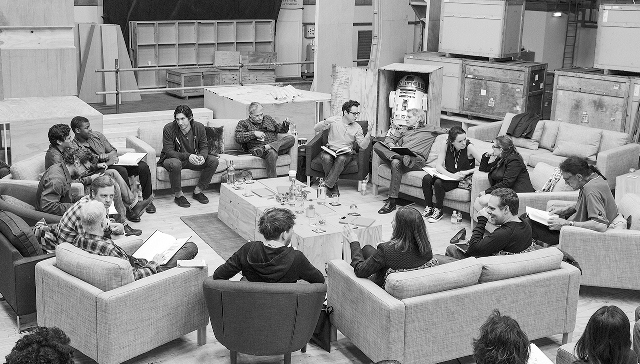