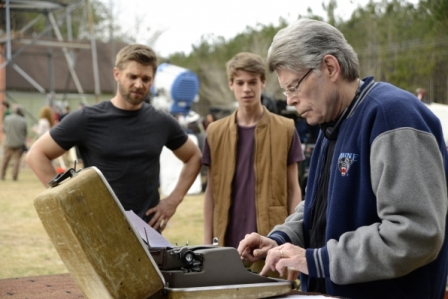 Stephen King at the typewriter, with Mike Vogel and Colin Ford.

“I knew that George R.R. Martin had written a few episodes of ‘Game of Thrones,’ and I was very jealous,” Stephen King told the LA Times. Now King has written the Season 2 premiere of Under the Dome, the CBS TV series based on his 2009 novel.

The episode — with its rather Thrones-like title “Heads Will Roll” — airs June 30. King also makes a cameo appearance.

He outlined some topics the show will explore in Season 2:

“For me, the most interesting idea is this Malthusian concept that there’s too many people and too little space, there’s starting to be this talk about euthanasia and thinning of the herd, and that’s a scary idea,” said King… “In a fantasy series, you have a chance to tackle some of these hot-button issues, and people will accept it, because it’s only make-believe.”

The notoriously prolific author also has two books coming out this year, Mr. Mercedes and Revival.