Paramount and CBS will drop their lawsuit against Alec Peters, maker of the Axanar fan films, J.J. Abrams told an interviewer during an event promoting Star Trek: Beyond.

A Paramount spokesperson confirmed the news in an email to Buzzfeed’s Adam Vary.

#Axanar's Alec Peters told me he did not know JJ Abrams would announce at #StarTrekFan event that lawsuit against him was going away. 1/2

Statement from CBS & Paramount regarding JJ Abrams' announcement about the #Axanar lawsuit. pic.twitter.com/ZpMdaBAPQC

The announcement came as a surprise to Peters. PC Magazine reports Axanar issued a cautious statement in response:

While we’re grateful to receive the public support of JJ Abrams and Justin Lin, as the lawsuit remains pending, we want to make sure we go through all the proper steps to make sure all matters are settled with CBS and Paramount. Our goal from the beginning of this legal matter has been to address the concerns of the plaintiffs in a way that still allows us to tell the story of AXANAR and meets the expectations of the over 10,000 fans who financially supported our project….

Set in the Star Trek universe, the first Axanar film was made in 2014 aided by over $100,000 in Kickstarter funding. A prequel called Prelude To Axanar had raised over $600,000 on Kickstarter. In 2015, Paramount and CBS filed a copyright infringement lawsuit seeking $150,000 in damages against Peters. 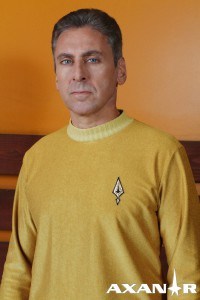