I know what my father would say if anyone told him that his books encourage "difficult behaviour." He would say 'Good!'

(2) CRAZY EX RATED. On NPR’s Wait Wait…Don’t Tell Me, “Not My Job: Actress Rachel Bloom Gets Quizzed On Crazy Ex-Boyfriends”.

Since she’s the expert on crazy ex-girlfriends we’ve decided to ask her three questions about some well-known crazy ex-boyfriends in a game called “No! Really! This time I’ll change!”

She mentions Ray Bradbury, subject of her 2011 Hugo-nominated song. 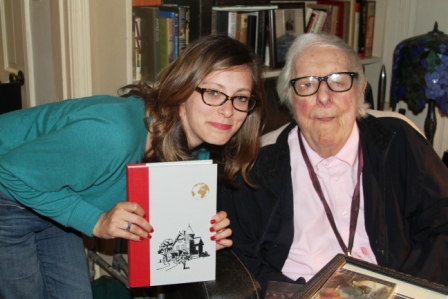 (3) GO AHEAD AND JUMP. David K.M. Klaus predicts, “Someday some Harry Potter fan is going to invent a practical personal jet pack or anti-gravity belt, just so he or she can play Quidditch.” ‘Til then we’ll make do with these skydiving Quidditch players from a Colombian phone commercial.

More than any other genre, fantasy tends to examine ancient epics. Whether it’s the study of archetypes and ectypes, or a historical understanding of narrative itself, or simply a desire to experience myths and legends that have lived for ages, these books remain alive to us. This series of posts will be about some of the more important mythic texts in history, and how they relate to modern fantasy.

The Story Behind the Story

The Epic of Gilgamesh is one of the earliest books we have on record. Original stories regarding the character date back as early as the eighteenth century BCE. The primary text was written between the 13th and tenth century BCE, in cuneiform on stone tablets. Then, it was lost for thousands of years, until it was rediscovered in 1850 in the excavation of Nineveh. Even then, it took decades to be translated into English.

Translations are tricky when dealing with situations like these. The poet Rainer Maria Rilke was one of the first people to read it translated. John Gardner (who also wrote the fantastic novel Grendel, a retelling of Beowulf from the monster’s point of view, and The Art of Fiction: Notes on the Craft for Young Authors) made a much more accurate, yet difficult to read translation, making certain to note each place the actual text was missing. Penguin Classics put out a two-volume translation by Andrew George which has received considerable acclaim. For a more poetic, if less rigorous version, Stephen Mitchell’s translation is quite readable, and uses inferences and the aforementioned earlier stories of Gilgamesh to fill in the missing gaps….

One man watches the world evolve as he passes, sleep by sleep, into the future, trailing after his generations of descendants….

(6) THE MARQUIS OF TENTACLE RULES. Is the beer as good as the label? Octopus Wants To Fight IPA from Great Lakes Beer. 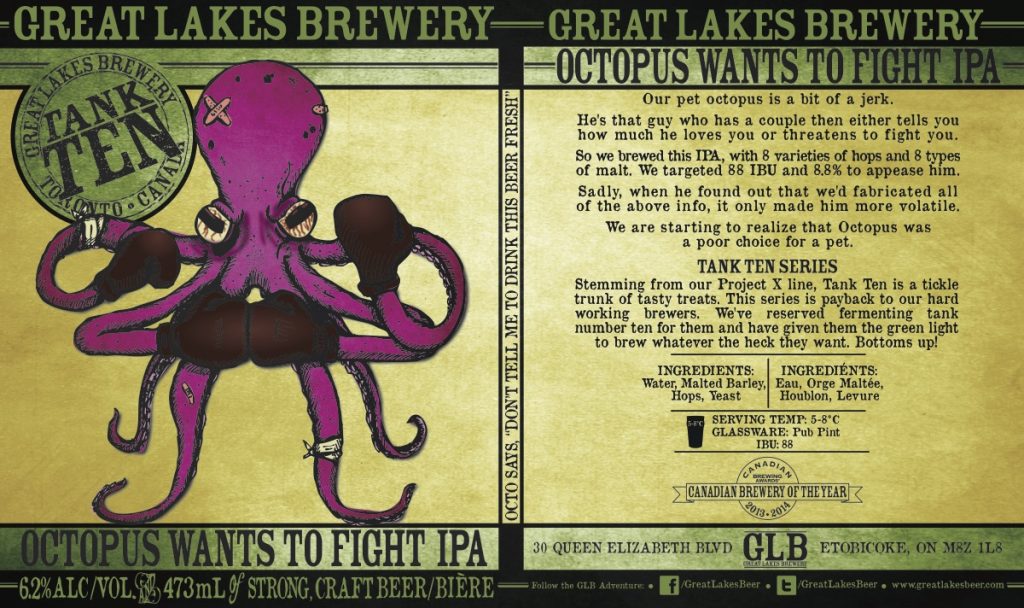 It pours a beautiful burnt gold edging into a dull orange, like a orange creamsicle complete with a tight white head. As you can imagine, lots of tropical fruits abound from the glass with the first whiffs, followed by a walk in the woods as pine, evergreen and some herbaceous notes are picked up. The first sip provides some sweetness, some dank grass combined with pine needles and then onto “juicy fruit”.  Soft body with some middle mouthfeel bitterness that tastes like another.

The Story “Our pet octopus is a bit of a jerk. He’s that guy who has a couple then either tells you how much he loves you or threatens to fight you. So we brewed this IPA, with 8 varieties of hops and 8 types of malt. We targeted 88 IBU and 8.8% to appease him. Sadly, when he found out that we’d fabricated all of the above info, it only made him more volatile. We are starting to realize that Octopus was a poor choice for a pet.”

(7) DRAGONSCALE. Mark Yon has a fine review of Joe Hill’s The Fireman at SFFWorld.

The arrival of the latest book by Joe Hill has generally been seen as one of the highlights of the publishing year, and has been much anticipated here at SFFWorld.

Joe has said that The Fireman is his take on his father’s masterwork The Stand. I can see what he means, though the end-results are clearly different. Whereas The Stand begins with the spread of a killer flu germ (‘Captain Trips’), The Fireman begins with the dispersal of a 21st century equivalent – a spore named Dragonscale, of unknown origin, possibly weaponised, that has spread to the general public. The symptoms occur suddenly and are quite striking – a strange dark tattoo, interlaced with gold, appears on the body,  often followed by spontaneous combustion of the person infected….

(8) FELLOW ARTISTS. Rudy Rucker blogs about recent visits to SF MOMA and other cultural events, accompanied by plenty of photos and wry commentary.

I was happy to see they have Arneson’s “California Artist” on display, wearing shades whose lenses are holes revealing, oho, that he has an empty head, California artist that he is. I first saw this sculpture when we moved to California in 1986, and I was, like, yeah, I’m a California artist too. I just didn’t realize that before. It’s high time I got here. Solidarität!

(9) FREE WEIRD. From Europa SF I learned about the English-language magazine Finnish Weird:

Finnish Weird is a free magazine published by the Helsinki Science Fiction Society. It introduces the concept of “Finnish Weird”, showcases a few writers and also includes short stories by Johanna Sinisalo, Anne Leinonen, Helena Waris, Leena Likitalo and Magdalena Hai. The printed version will be available on select occasions (come and look for the Finnish party at Worldcon!), but you can also read the zine online or get an electronic version, either as a pdf or an ebook (epub).

(9) LET IT RAIN. The Kickstarter for Quench seeks $20,312 to fund the creation of a computer game that allows players to control the weather and help herds of animals restore their home. Coming to PC & Mac in 2016.

Using your divine powers over the weather, you will provide for your herds, help them as they take up their great pilgrimage, and ultimately restore the world.

Create gusts of wind to hurry your animals along, confuse attackers, and shift great dunes of sand.

Strike lightning to start fires, revive fallen animals and obliterate foes. But don’t forget to take a moment to appreciate the beauty of nature!

There’s also an option for people to vote yes to greenlight the game on Steam.

(10) MORE ABOUT BLACK GATE. Rich Horton’s thoughts about the impact on fiction categories comes before this excerpt in his Black Gate post The Hugo Nominations, 2016; or, Sigh …”.

Of course Black Gate was nominated as Best Fanzine last year, due to Rabid Puppies support, and John O’Neill quite rightly withdrew its nomination. This year we again were (unwillingly) on the Rabid slate, and again John has decided to withdraw.

We discussed what to do – though the choice was always John’s – and there was a definite split. Many of us – myself included – at first inclined to the notion that perhaps we should stay on the ballot. I had four reasons for this: 1) I am certain that Black Gate got a good amount of support from non-Rabid nominators (but we have no way, for now, of knowing how much); 2) I though perhaps the point had been made last year; 3) I felt that withdrawing was ceding even more influence to Vox Day, and also was to an extent disenfranchising the non-Rabid nominators; and 4) I really do think Black Gate is a worthy choice.

But John made two very strong arguments in favor of withdrawing, arguments that now have swayed me so that I believe his decision is correct. First, and most important, by withdrawing it is guaranteed that there will be an entry on the Final Ballot not chosen by Vox Day. Second, in John’s estimation, it is likely that Black Gate wouldn’t have won anyway. I don’t think that’s nearly as important – but it’s probably true. (Alas, the very possible win for whoever replace Black Gate will be somewhat tainted as well if it’s perceived that it won as a default choice.)

(11) CAUSES ME TO TINGLE. Rachel Swirsky said if her Patreon reached $100 by the end of May she would write and send “If You Were a Butt, My Butt” to everyone who subscribes. Well, soon after this tweet, it did, and donations are still coming in. The funds will be given to Lyon-Martin health services.

Only $3 to go for an audio book of "If You Were a Butt, My Butt!" https://t.co/pbOHQL4aKT pic.twitter.com/qTWgAyTC06

“Damien gets passionate about writing, and talks about the thing that makes it hard, the clash of two very different sides of our personality, the conscious mind and the subconscious imagination. OR. The crazy old hippy VS the corporate middle manager in all of us.”

(13) THREE GOLDEN MINUTES. Kendall turned us on to the amazing 2012 short film “The Device.”

[Thanks to Sunhawk, JJ, David K.M. Klaus, ULTRAGOTHA, Kendall, and John King Tarpinian for some of these stories. Title credit goes to File 770 contributing editor of the day Hampus Eckerman.]