(1) HARRY AND THE PIRATES. Your average author can only wish they got this level of service. Reuters has the story — “Defense Against the Dark Arts: UK spies guarded against Harry Potter leak”.

Shortly before the publication of one of the volumes in J.K. Rowling’s seven-part wizarding saga, with millions of fans worldwide at a fever pitch of anticipation, publisher Nigel Newton received an unexpected phone call.

“I remember the British spy eavesdropping station GCHQ rang me up and said ‘we’ve detected an early copy of this book on the Internet’,” Newton told Australia’s ABC Radio in an interview last week that gained attention in Britain on Sunday.

“I got him to read a page to our editor and she said ‘no, that’s a fake’,” said Newton, founder and chief executive of Potter publishing house Bloomsbury, describing the spies as “good guys”.

A spokesman for GCHQ said: “We do not comment on our defense against the dark arts.”

(2) MORE EAVESDROPPING. R. A. MacAvoy lets us listen in on her “Conversations with People Who Aren’t There”.

The reason I was convinced my imaginary conversations were universal to the human condition was simply my embarrassment knowing that, since I had constructed my verbal respondents, when we had a difference of opinion – a necessarily frequent happening – I always won the debate.  This, in itself, was so much a stacking of the deck, or loading of the dice of the disagreement, I would hate for anyone to know I was doing it.  It was so much like playing chess with one’s self and cheating.  And I assumed everyone else on the planet felt as I did about it, and so, from an attempt not to appear the scoundrel I was, I kept my mouth shut (for once) about the existence of this wild and crazy inner life.  I was certain any other person would do the same.  So I have continued, for approximately sixty years, to live this way, mumbling to myself or to the non-human creatures about me, or even the furniture. And thinking every other soul did also.

It was only perhaps a week ago I asked Ron whether he did not spend his hours as I did.  I expected him to answer “Of course,” or simply smile knowingly and shrug.  Instead he looked at me intently and said “No. Not so often.”

This was quite a surprise.  It was, in fact, a re-set of my expectations.  The human condition was not entirely as I had thought it was.  Not for all these years.

So I must re-evaluate my life of inner debate.  I have not just been rigging the game of internal conversation.  It seems I invented the game before I rigged it.  My ego-centricity is far more overwhelming than I thought.  I am not proud of myself.

Nonetheless, there have been some interesting conversations over the years.  If I must take the blame for doing the thing, I can at least describe how I have done it.

The most common repeated dialogue I have is with any film or television actor who pronounces words in a way I disagree with.  Of course I am arguing with the character, not the real actor, but as no one is there, it doesn’t matter.

(4) LOVELY ROOM, SLIGHT DRAFT. Supposedly this happened — “Tim Peake Leaves TripAdvisor Review For The International Space Statuion’s New ‘Space Hotel’” — although neither Steven H Silver nor I have been able to find it on the actual TripAdvisor site.

Bigelow Aerospace is trialling a new “space hotel” this week, attaching their new inflatable hotel room to the side of the International Space Station to test the possibility of having a holiday resort in Earth’s orbit.

The inflatable “BEAM” module is made of a top secret material that may make holidaying in space a reality, but first it’s being tested aboard the ISS.

Not one to ignore a chance at giving his two cents to the people on terra firma, British astronaut Tim Peake has left a review for the “space hotel” on TripAdvisor.

During a scheduled contact on Thursday, April 7, mission operations engineers discovered that the Kepler spacecraft was in Emergency Mode (EM). EM is the lowest operational mode and is fuel intensive. Recovering from EM is the team’s priority at this time.

The mission has declared a spacecraft emergency, which provides priority access to ground-based communications at the agency’s Deep Space Network.

Initial indications are that Kepler entered EM approximately 36 hours ago, before mission operations began the maneuver to orient the spacecraft to point toward the center of the Milky Way for the K2 mission’s microlensing observing campaign.

The spacecraft is nearly 75 million miles from Earth, making the communication slow. Even at the speed of light, it takes 13 minutes for a signal to travel to the spacecraft and back.

(6) HOW MUCH IS THAT NOVEL IN THE WINDOW? Fynbospress has an intriguing post about indie book pricing at Mad Genius Club – “Know your reader demographics: Pricing”

2. The discount crowd ($0.99 – $5.99) Believe it or not, this is a different group from the Free Crowd. There’s plenty of overlap, but it’s a different crowd. Unlike the hardcore free-only, the 99 cent crowd will buy books cheap. If they’re long-term broke, they’re likely to use some of the tools to track your sales and only buy when the price drops. These are the people who keep all the used bookstores in business. At this price point, you’re competing with used paperbacks from McKay’s Powell’s, Amazon… you are NOT competing with new books from B&N or Book a Million.

How big is this market? I don’t know if there’s a way to tell – certainly it hasn’t been measured. But it’s been large enough to support thousands of used book stores across the US alone (much less the charity shops in the UK), and to propel low-pricing indie authors into millions sold.

You can develop fans here. If you stay in this price range, they’ll buy everything you put out the moment they discover it. (Not the same thing as the moment you release it, and that’s why a mailing list / social media presence / targeted advertising is a good thing.) You can also use this range to tempt people into impulse buying your works, in conjunction with targeted advertising.

In 1913, the 21-year-old Ronald Tolkien should have been studying for his exams. He was halfway through his Classics degree — the subject all the best students did at Oxford in those days. Getting admitted to Oxford on a scholarship was a great opportunity for young Ronald, an orphan who had always struggled to stay out of poverty. A Classics degree would have set him up for almost any career he chose. But he wasn’t studying. Instead, he was trying to teach himself Finnish.

Why would a brilliant student with so much at stake let himself go astray at such a crucial time? There were two reasons: love and the Kalevala.

Tolkien’s twin obsessions at the time were his future wife, Edith Bratt, and the Kalevala, the national epic of Finland.

I’ve decided that Argentus is no longer being published.  I had planned on doing an issue last year (and didn’t) and then wrapping it up this year, but with chairing three conventions in 11 months, Worldcon programming, surgery, and life in general, I don’t see it happening this year either.  If I do another fanzine, it will be a different creature.

(12) DISTILLED WRITING ADVICE. Lit Reactor has compiled “22 of the Best Single Sentences on Writing”. The most contrarian comes from G. K. Chesterton: “I owe my success to having listened respectfully to the very best advice, and then going away and doing the exact opposite.”

(13) FESTIVAL OF BOOKS. The Los Angeles Times Festival of Books wrapped up on Sunday.

Mercedes Lackey was on hand.

"I didn't want to marry Spock, I wanted to be Spock." – @mercedeslackey at the YA Fantasy panel @latimesfob #Bookfest

"I have many, many wonderful Slytherin friends" – @sabaatahir at YA Fantasy panel @latimesfob

[Thanks to John King Tarpinian, Steven H Silver, JJ, Will R., and Michael J. Walsh for some of these stories. Title credit goes to File 770 contributing editor of the day ULTRAGOTHA.] 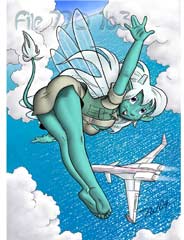 I couldn’t let a year go by without a new issue of File 770 and, with creative help from Taral, John Hertz and John King Tarpinian, I managed to get one done just before the last page was torn from the calendar.

File 770 #163 [PDF file] boasts Taral’s diplomatic memoir about his brief time as an artist for an sf publisher, a full LoneStarCon 3 report from John Hertz, and Martin Morse Wooster’s account of Readercon 24, the first one since It Happened.

This is an especially good a day to visit to Bill Burns’ eFanzines site. The latest three zines to be posted, besides my own, are Robert Lichtman’s Trap Door #29, Steven H Silver’s Argentus #13 — and Journey Planet #18, guest edited by Helen Montgomery, where anonymous contributors say what they think about the effects of social media on fandom.