(1) SHORTLIST TRUTHS. At The Hysterical Hamster Ian Mond asks “What Are Award Shortlists For? No… really… please tell me… I want to know….”

What are award shortlists for?

Obviously their main purpose is to recognize and celebrate the best works published in a specific timeframe and a given context.  That celebratory aspect, in particular, is reflected in my Facebook and Twitter feeds moments after a shortlist is announced as friends, rightly, congratulate the nominees.

But once people have provided virtual pats on the back to the finalists, once the glow of platitude and praise has dimmed, what purpose does an award shortlist serve?  Is it there to be read?  Is it there to spark conversation?  Is it there to further the debate – what there is of it – about the genre?

I ask because this week the Kitschies, one of my favorite awards, announced its list of nominees.  When I reported this on my blog earlier in the week I applauded the diversity on the list – both in terms of gender and race – and the fact that there was a distinct lack of multi-series books present (a particular peccadillo of mine).  I also made the throwaway remark that given the winners are announced on March 7 I wouldn’t have the time to read the nominees

(2) THE LATEST AND EARLIEST NEWS ABOUT ELLISON. Mary Reinholz’ interview in the Pasadena Weekly covers “‘Fire-bringing’ Harlan Ellison, one of America’s greatest short story writers, on protecting his work, L. Ron Hubbard, Octavia Butler, and why he will never stop writing.”

“Since the stroke, my right side is still paralyzed, but I can still type with two fingers,” he says during a recent call to his hillside home off Mulholland Drive. “I still get around. I get up and get into the wheelchair. I went to a [science fiction] convention in St. Louis and they all seemed to take it well. No one stoned me, even though I have this reputation of being a tough old bagel that’s hard to chew. A couple of times, I’ve done (spoken word) recordings. But mostly I lie in bed and watch the ceiling.”

…Ellison also remains deeply wedded to his work. December saw the hardcover publication of “Can & Can’tankerous,” which includes previously uncollected short stories and a tribute to Ray Bradbury, and in September the ninth edition of “Ellison Wonderland” was released; the collection was first published 52 years ago.

A third Ellison biography is expected to be published next year. It’s an authorized one written by Nat Segaloff, who has penned several books about Hollywood royalty, the latest on director John Huston. In “Dreams with Sharp Teeth,” a 2008 documentary directed by Erik Nelson, there are interviews with Ellison who admits he once sent a dead gopher to a publisher in the mail and others with his deceased crony Robin Williams, who committed suicide in 2014.

…Ellison, whom the Washington Post has called “one of America’s greatest living short story writers,” joined the bloody 1965 march from Selma to Montgomery, Alabama, led by the Rev. Martin Luther King Jr. He was a friend and mentor of the late African-American novelist Octavia E. Butler, the first black woman to achieve international prominence within the largely white male bastion of science fiction writing. She grew up in a racially mixed neighborhood of Pasadena. Ellison was one of three people to whom Butler dedicated her 1994 book “Mind of My Mind.”

Butler, who died in 2006 at 58, was an unknown young writer when she first met Ellison at a workshop. “She was one of my students and came to me as part of a (program) the Writers Guild had decided to put together to bring in Latino and black female outsiders,” he recalls. “She came to me with a story. I took a look at it and knew how good it was. We talked about it and workshopped it and it went on from there. I was just one step on her way up. She did it all herself. She was a stalwart woman.”

(4) FIGHTING IN YEARS TO COME. Learn more about the “Narrative of the future developed at Science Fiction Futures workshop” hosted February 3 by the Marine Corps Warfighting Lab (MCWF) and the Atlantic Council’s Art of Future Warfare Project and taught by Max Brooks, August Cole and Charles E. Gannon. The article is posted at Marine Corps Base Quantico.

The Marine Corps of 2035 will fight in megacities in Southeast Asia and the Pacific, deploying from an arid United States that has retreated to a defensive posture and directs little funding to the military.

The enemies of the future will be internal terrorists from both the extreme right and left, international mega-corporations that control the desalination of water, the Chinese mafia, and other established states with stable governments protecting their interests.

The weapons and equipment of the future will be autonomous robots, miniature electromagnetic pulse weapons, powered exosuits, and a proliferation of area denial weapons that limit access to trade routes.

But while the future Marines will be fighting in a different place, against a different enemy, and with different technology than they do now, they’ll still have a “boots on the ground” element and will still have to be flexible and think outside the box. And even in 2035, they’ll probably still be using masks from 2022.

(5) SFWA-SUPPORTED KICKSTARTER. “Star Project 3” at the SFWA Blog tells about the latest non-member Kickstarter project the organization is helping.

Projects are selected by the Self Publishing Committee, coordinated by volunteer Rob Balder. Selections are based on the project’s resonance with SFWA’s exempt purposes, and special preference will be given to book-publishing projects in the appropriate genres.

SFWA is delighted to announce support for our latest Star Project: The Year’s Best Australian Fantasy & Horror #6. We hope you will consider funding it as well.

From the project’s Kickstarter campaign:

The Year’s Best Australian Fantasy and Horror is over 150,000 words of the best fantasy and horror fiction written by Australians (and New Zealanders) and published all over the world in 2015. We’ve already done this five times for the years 2010-2014, and we’d like to do it again.

In addition to the reprinted fiction, The Year’s Best Australian Fantasy and Horror series features an extensive introductory essay on the annual state of the genre, obituaries, a recommended reading list, and a list of Australian and New Zealand award recipients.

It is the only volume of its kind being published in Australia at present.

Marvel has tapped Star Trek’s own Will Riker… Jonathan Frakes… to voice J’Son, King of the Spartax in the Guardians of the Galaxy animated series. USA Today is reporting bringing the veteran actor on board to play the father of Peter Quill (Will Friedle). Frakes has spent more time behind the camera than in front over the last few years becoming a highly respected television director.

J’Son is Star-Lord’s father in the comics as well as in the animated series, but the live-action movie is going a different direction according to director James Gunn and it is believed that Kurt Russell will be playing that version of Quill’s (Chris Pratt) father.

The preliminary list of recommendations for the Best Dramatic Presentation, Short Form category:

A white pony dressed as a unicorn ran through the streets of Madera County, Calif., for over three hours on Wednesday night before she was caught by police. The costumed pony, named Juliet, first escaped from a child’s birthday party at about 2:30 p.m., but was soon recaptured. However, she got loose again around 5:30 p.m. and proceeded to lead California Highway Patrol on a long chase as she wove in and out of traffic. “We got a call of a unicorn running in the roadway on 12th avenue near Road 32,” Officer Justin Perry told KTUL. “I’ve been doing this for 14 years and this is my first call for a unicorn.”

(10) PIN POEM. Nicole J. LeBoeuf-Little broke out in verse when she received her Hugo voting PIN…

On the evergreen topic of MAC II, and in honor of the completely unprompted email I got from Hugo Administration yesterday morning (I’m not patient, I’m just lazy and never got around to emailing them), I give you…

Pup’s in the Manger (TtTO)

My PIN arrived just the other day
With a letter saying “Friend, come and have your say:
Did you read a thing that just blew you away?
Are your socks now orbiting the Milky Way?”

Well I said, hooray! time to nominate–
We don’t want to have no slates, friends,
My vote’s not about those slates

And the pup’s in the manger with a bad review
And little boy Larry wants a rocket to the moon
Are we all gonna go to K. C., then?
We’ll get together then, friends, You know we’ll have a good time then

[Thanks to Will R., JJ, Andrew Porter, David K.M. Klaus, and John King Tarpinian for some of these stories. Title credit belongs to File 770 contributing editor of the day Will R.] 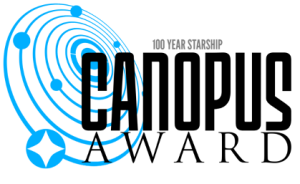 100 Year Starship today announced the first slate of judges for the 2015 Canopus Award, an annual writing prize recognizing fiction and non-fiction works “that contribute to the excitement, knowledge, and understanding of interstellar space exploration and travel.”