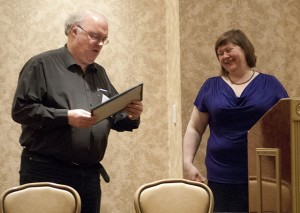 By Jacq Monahan: From April 20-22, the fannish faithful flocked to Southern Nevada for the 29th annual Corflu gathering that’s all about fanzines and fen. Naturally, the close proximity to Las Vegas bestowed a fitting surname of Glitter upon this Corflu, nestled in the desert, but by no means “dry.”

Starting off with a Vegrants Pre-Con Kick-off party on Thursday night, the relaxacon offered two consuites (on floors 4 and 6) that catered to both smoker and non-smoker. British and American accents mingled like smoke anyway, no matter where you ventured, but each suite was well-stocked with comestibles and libations to please any number of nations, in this case the U.S., the UK, and Canada.

Opening and closing ceremonies, all panels, a fan fund auction, the banquet and subsequent FAAN awards were held in the second floor Sunset Room, so Corflu Glitter basically took place on the lower even floors (2-4-6) of Sunset Station. Not that that’s odd or anything.

Friday featured a nature walk around part of Lake Mead (led by Ken Forman) panels on Fan Funds, Vegas Fandom Memories, and a Las Vegas Fandom Reunion which took place that evening, with erstwhile fans like Greg Dees and Paul Gardner popping up to surprise the crowd.

Saturday’s events included a fan fund auction to benefit Corflu, TAFF, DUFF, and Corflu 50. TAFF netted nearly $200 from the sale of an eclectic group of items like trip reports, a Spock liquor decanter and a plush dust mite. Yes, I said dust mite. Hey, equal time for vermin; they are the more intricate shapes to stuff, anyway. The little critter went for $5.

A Trufandom 2020 panel and a Conversation with Shelby Vick (Corflu 50 winner) led attendees right into the World Fan Trivia Championship (Sandra Bond and John D. Berry creators), before the place broke out into a New York Fandom Reunion Open Party. Yes, there was deli.

Nic Farey, along with his wife Bobbie, hosted a roomful of usual suspects that featured a phalanx of fans all wearing Beam T-shirts and looking as if they’d imbibed on the product (both liquid and literary). The 10th floor room was the site of a British Invasion that featured Mark Plummer on keyboards and Nic Farey on vocals. A video of this performance exists somewhere, its owner waiting for just the right time to request a “donation” NOT to release it to the public.

The Corflu tee-shirt featured artwork by Ross Chamberlain and demand was so popular that the product nearly sold out, except for Small and Medium sizes. Who could wear those with such constant consuite cornucopias of sweet, salty and savory treats available? The same image adorned the Program and depicted a beanie-with-propeller-wearing fairy. Even California resident and virtual attendee Robert Lichtman e-mailed his admiration and desire for the tee.

On Sunday evening a Corflu Sunsplash reunion photo was taken with attendees filling up a room in the smoking consuite to reminisce about a much more humid Corflu that took place back in 1999. That’s so last century of them.

The Final Revel commenced at 7:00 Sunday evening and continued from the p.m. to the a.m., as attendees spent a last night together before returning to homes that ranged from a few miles away, to several thousand.

Corflu, after all, has always been the little convention that could, and did, and still does, literally speaking volumes (of fanzines) wherever it might land on the planet. 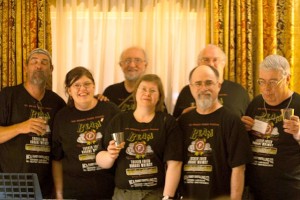 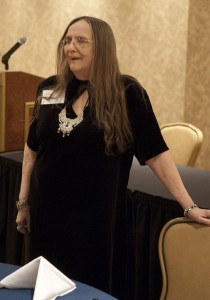 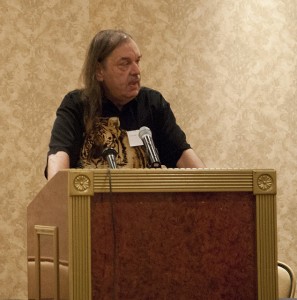 Arnie Katz at the dais. Photo by Gary Mattingly. 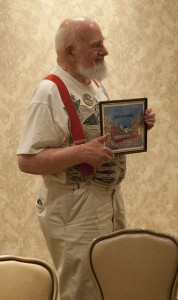 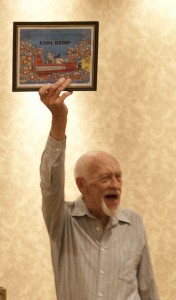 Fans at the Corflu Glitter banquet. Photo by Gary Mattingly.

The Lifetime Achievement Awards “salute living fans for their excellent fanac over a long career in Fandom,” Arnie Katz explained in Glitter #61.

The Lifetime Achievement Awards were given for the first time in 2010, to Ted White and Art Widner.

A judging committee selects the winners from among nominations submitted by fans. The committee is made up of the two most recent Corflu chairs, the current Fan Achievement Awards Administrator, and any past Lifetime Achievement Award recipients who want to participate.

Fans may now submit nominations for the 2012 Fan Activity Achievement Awards. These awards honor the best in fan writing, drawing, publishing and posting for the calendar year 2011. The winners will be announced at the Corflu Banquet on April 22.

Andy Hooper is the awards Administrator and he has compiled a helpful list of 2011 fanzines, noting the award category (genzine, perzine or special publication) that suits it best. Hooper invites fanzine editors to visit the Corflu site, look at their entry and send corrections as needed.

Votes may be cast electronically or by snail mail. See the instructions on the ballot. Mailed votes must reach Andy by March 1. Email votes must be submitted by Noon PST on March 1, 2012.

I learned from Storage Wars that bidders on repossessed storage units are always hoping to find a special item with the “wow factor.”

I’d say the Corflu Glitter auction has found its fannish counterpart – an item with the “goshwow factor.” Arnie Katz reports in Glitter #39:

A painting with both artistic excellence and major fanhistorical significance is the latest contribution to the Corflu Glitter auction. Thanks to the incredible generosity of Linda and Ron Bushyager, a savvy bidder will be able to acquire a large framed Atom (Arthur Thomson) cartoon that once hung on the door to the Fan Attic at 178 Newtownards Rd., the home of Walter and Madeleine Willis.

“The auction is a key revenue source for Corflu,” notes Chairman Joyce Katz. “It has spelled the difference between a minor and a major financial loss at all three previous Las Vegas Corflus. It’s an honor to have this item included in the auction and, due to Linda, it will mean a nice infusion of cash into the Corflu treasury.”

Corflu Glitter will produce a Ross Chamberlain anthology in conjunction with the “New York Fandom Reunion” being held at the convention. The collection will have approximately 50 pages of his fannish, sf and fantasy artwork.

“Ross has been a great fan artist for nearly a half-century,” says Joyce Katz, Corflu Glitter Chairman. “This anthology will be a lasting testament to the excellence of his work.”

[Via Glitter #24. Thanks to Arnie Katz for the story.]

If you love the Corflu Glitter logo, have they got a deal for you. You can buy the shirt, brandish the button, wear the hat and chug from the mug. There won’t be the slightest doubt which con is your fave. Proceed immediately to the Corflu Glitter store at Café Press.

[Thanks to Arnie Katz for the story.]

The Fan Activity Achievement Awards (FAAN Awards) categories have been tweaked in readiness for next year reports Arnie Katz in Glitter #20.

The Number One Fan Face will be determined by point totals in the seven categories.

Also, Hooper is looking for faneds who will pub their ish between Thanksgiving 2011 and February 1, 2012 to distribute a paper FAAn Awards ballot as a rider. If you’re willing to help, e-mail him at this edress — fanmailaph (at) aol (dot) com.

You know us frowsy old fanzine fans, in love with steam-powered e-mail and devoted to making electronic graphics files look like something fresh from Edison’s mimeograph.

Arnie Katz’ latest broadside about the 2012 gathering in Las Vegas, Glitter #17, draws back the curtain on the most ambitious array of interactive audio and video planned for any Corflu to date.

The Virtual Consuite. Fans around the world will be able to interact with revelers in Corflu Glitter’s Main Consuite and tune into the speeches and presentations at the banquet on Sunday.

Video Proceedings. We plan to tape the formal program and incorporate footage into a Corflu Glitter Memory Video that will be available as a free download.

Roving Videographer. Each day, Corflu Glitter’s intrepid video journalists will circulate among the fans with a question of the day. Don Miller will edit this material for distribution.

Audio and Video Entertainment. Don Miller will present a varied program of video and audio of interest to fans on Saturday evening in a suite adjoining the Main Consuite.

Arnie, who celebrates his 65th birthday on July 2, sounds rejuvenated by these exciting plans. No wonder, even cons drawing thousands of fans can’t always command this level of technical virtuosity.

Shelby Vick is the Corflu Fifty’s choice to receive the trip to next year’s Corflu in Las Vegas.

The Corflu Fifty fan fund underwrites someone’s attendance at the con each year. In contrast to other funds, the recipient incurs no obligations, such as becoming the fund administrator and having to raise money for the next trip.

Arnie Katz, announcing the news in Glitter #12 (PDF file), approved this as a joyous example of “what goes around comes around”:

It’s fitting that Shelby Vick will represent the Corflu Fifty at Corflu Glitter, because he sparked the creation of today’s fan funds with his “WAW with the Crew in ‘52” campaign that brought Walt Willis to the 1952 Worldcon in Chicago.

The name Corflu Fifty, Randy Byers once said, reflects how many contributors they want to have, versus how many they already have. Interested fans can contact fund administrator Rich Coad at richcoad @comcast.net [remove the extra space]. Coad explained how it all got started, in Vegas Fandom Weekly #98:

The Corflu Award is an outgrowth of the successful oneoff funds to bring Bruce Gillespie and William Breiding to Corflu Titanium in 2004 and to bring Harry Bell to Corflu Quire in 2006…. Andy Porter came up with the excellent suggestion of getting a group of fifty fans, each willing to donate 25 dollars or 15 pounds, to be the fund-raisers.

Arnie Katz served up another buffet of 2012 Corflu news in Glitter #7.

Corflu Glitter is working to please nonsmokers and smokers alike. Non-smokers are assured that the hotel, Sunset Station, forbids smoking in all public, indoor areas except the casino. And Corflu’s main consuite will be in a non-smoking room on a non-smoking floor. However, there will also be a consuite on the 4th floor, where smoking is permitted in the rooms.

Meanwhile, science friction fandom has been heard from, forcing the Las Vegas Corflu committee to declare —

In response to two, unrelated requests, Corflu Glitter is unalterably and unequivocally opposed to banning, barring or excluding any fan from Corflu under any circumstances. We would never host a Corflu that prevented any legitimate fan from attending.

…Let me make this even more emphatic: If Corflu Glitter’s favorite fan in the whole wide world asked us to exclude the worst person we know in Fandom, we would not do it.

That’s good, because I don’t think any of us would want to miss an opportunity to meet Claude Degler…