By Jameson Quinn: [Originally left as a comment.] So, Bruce Schneier and I are working on an academic paper about the E Pluribus Hugo (EPH) proposed voting system. We’ve been given a data set of anonymized votes from 2015. I don’t want to give all the results away but here are a few, now that people are actually voting for this year’s Hugos:

Feel free to promote this to a front page post if you want. Disclaimer: EPH is not intended to shut the puppies out, but merely to help ensure that the diversity of the nominees better reflects the diversity of taste of the voters.

(1) Jim Davis, who was on the set while they shot the second episode of Star Trek:The Next Generation, recalls “Patrick Stewart’s trailer still had a handwritten sign on it (by him) that said ‘Unknown British Shakespearean Actor’).”

(2) The Catcher In The Rye bar in LA is gives its drinks literary names. Here is a sample of what the menu has to offer.

“Once upon a midnight dreary, while I pondered, weak and weary…”  -Edgar Allen Poe

“But what I do, I do because I like to do.” -Anthony Burgess

But no Bradbury reference? That seems out of character for a book-themed enterprise based in his home town.

Compare this to the Literati Cafe which made the papers a few years ago by serving a cocktail named the Fahrenheit 451.

(3) Nicholas Whyte has updated his survey 2015 Hugo Awards: how some more bloggers are voting.

(4) Patrick May tested EPH with the 1984 Hugo data (scroll down to comment #299). I still got two Hugo nominations. What more do I need to know?

(5) I may have forgotten to mention that Sarah A. Hoyt and the Mad Genius club don’t write about Puppies most of the time. Dare I say that I usually enjoy the expositions about professional writing?

This post has been prompted by my friend Amanda Green’s post on Amazon.  To whit, by the implication that Amazon killed Borders that others have flung up.

This is a touchy subject, because although I was informed that nice ladies don’t discuss politics, religion or coitus in public, I’ve found that the touchier subject is money: making it, keeping it, wanting it….

Did Amazon kill Borders?  Well, only if you look at it as assisted suicide.

Borders grew and became very big by having a system.  The system was ordering to the net.  They ordered only proven sellers.  The way they did this was by looking in the computer at the author’s name, and seeing how many of his hers or its (must be post binary) book they had sold.  Then they ordered just that number.

This system worked magnificently while Borders was a small bookstore, in a small town, and before the publishers tumbled onto it.  Two things Borders didn’t take into account: the variety of regional tastes and the corruption inherently possible in the system….

And this Mad Genius Club report “How to work with artists” based on the advice given by Sam Flegal, Libertycon artist GoH to self-publishers.

Just as we frequently say here that “It’s all in the contract!” and “You are not selling your book, you are licensing intellectual property!” Guess what? When dealing with artists, it’s all in the contract. And when you talk to them about using an image for a book cover, you’re not buying the work, you’re licensing intellectual property. Yep, that’s right: they’re just as concerned about licensing and IP rights when they talk to you as when you talk to a publisher… because in this case, they’re the IP creator, and you’re the publisher!

The shoe is now on the other foot. So, what terms should you offer the artist?

(6) Can it be that the makers of Sky Captain and the World of Tomorrow, pioneers of the “digital backlot” that became the model for producing superhero summer blockbusters, lost so much money they never got to reap the benefits of their own system?

But a few great reviews don’t make a difference if your numbers are bad, and Sky Captain’s were very bad. Cinemagoers, perhaps put off by its black and white visuals or comic-strip tone, stayed away: the film made just $15.5 million on its opening weekend. This would have been fantastic if the film had used the tiny budget for which the brothers had originally asked, but the reported cost of $70 million made its eventual worldwide takings of $58 million a catastrophe…..

Kevin Conran has worked in the art department on films including Bee Movie and Monsters Vs. Aliens, and as a production designer on Dreamworks’ Dragons, a TV spin-off of the hit movie How To Train Your Dragon. As he muses on where the Sky Captain experience has led him, he says. “I think sometimes that there’s a world where we might have made this thing for $3-4 million and there would be a whole different story to tell.“

Kevin would never say this himself, but the Conrans’s contribution to cinema is huge. “You can absolutely draw a line from Sky Captain to the look and feel of many of the big blockbusters we see today,” says Ian Freer. “Its use of a digital backlot is now the dominant M.O. for production design. Films like 300, Sin City, Avatar and Alice In Wonderland have all created worlds built on the ideas put down by Conran.”

As much as the big budget movies have taken the techniques the Conrans developed, still very few people have really done what they set out to do: eradicate the need for giant budgets on fantasy films. Their plan was not to make things better for James Cameron or George Lucas, it was to give opportunity to the guys nobody had heard of – guys like them – and to have moviemaking be restricted only by your imagination not your bank balance.

“Conran crystallised the idea of the one man film studio, taken up by the likes of Robert Rodriguez and Gareth Edwards (director of Monsters and later Godzilla),” continues Freer. “But there are other ways in which Conran was ahead of his time. Sky Captain is a film built entirely on nerd love by a nerd director. With its in-jokes, old school visuals and pastiche of old genres, Sky Captain is the ultimate ‘geekgasm’ years before the word was invented.”

(7) Prediction: the Scooby-Doo & KISS: Rock & Roll Mystery will never be on Kyra’s bracket. 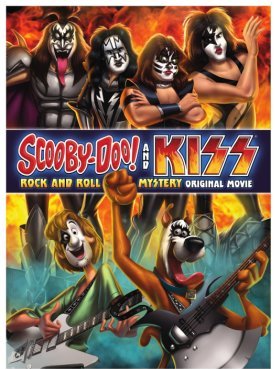