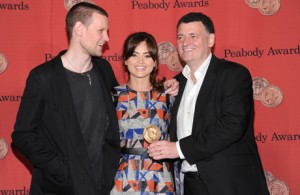 Doctor Who has been presented with a Peabody Award , one of the top honors in American television.

The George Foster Peabody Awards recognize distinguished achievement and meritorious service by broadcasters, cable and webcasters, producing organizations, and individuals. Selection is made by the Peabody Board, a 16-member panel of distinguished academics, television critics, industry practitioners and experts in culture and the arts.

Seemingly immortal, 50-years-old and still running, this engaging, imaginative sci-fi/fantasy series is awarded an Institutional Peabody for evolving with technology and the times like nothing else in the known television universe.