(1) LISTEN TO THE PICNIC. Podside Picnic is the place hosts Podside Pete, Karlo Rodriguez and Connor Southard engage with and discuss science fiction, fantasy and horror media. In addition to their Patreon subscriber content, they also feature interviews with SFF authors that are available to non-subscribers at Podside Picnic on Soundcloud – sample links below.

We like the phrase “literature of the fantastic” to encompass what most interests us, but our interests morph as we continue this journey and learn from each other and from our audience and guests. Much of our focus is on what’s long been called “genre fiction,” especially science fiction and fantasy, but curiosity is more important to us than marketing lingo. We believe the future of storytelling lies in crossing traditional boundaries.

In which Pete and Connor are joined by a living legend of science fiction, Peter Watts. We discuss his contemporary classic novel Blindsight, but we also discuss love, legal misadventures, life itself… and sea cucumbers

Pete and Karlo are joined by author, Karen Osborne to discuss her novel “Architects of Memory” and how even in the far future, people will try their best and sometimes fail.

In which Pete and Connor are joined by writer Isaac Butler, who wrote this fascinating piece about unjustly forgotten fantasy and sci-fi writer John M. Ford: slate.com/culture/2019/11/john…n-fantasy-books.html

(2) GOTHAM BOOK PRIZE. The City We Became by N.K. Jemisin is a nominee for the inaugural Gotham Book Prize.

As the city comes through COVID-19 and enters a challenging period ahead, recognizing what makes it special and unique is more important than ever. The Gotham Book Prize is awarded once a year to the best book (works of fiction and nonfiction are eligible) published that calendar year that either is about New York City or takes place in New York City. The winner will receive $50,000. Selections will be reviewed by an independent jury with the winner selected by the prize’s co-founders/ funders.

Jemisin’s book and Rumaan Alam’s Leave the World Behind are the lone two works of genre interest among the 10 nominees.

(3) THE HELLUO YOU SAY. [Item by Mike Kennedy.] Wikipedia word of the day [24 January GST]  is helluo librorum : (literary, archaic) An insatiable and obsessive bookworm (“avid book reader”). Here’s an example of the term used in a sentence:

[A] Writers Stomach, Appetite, and Victuals, may be judg’d from his Method, Stile, and Subject, as certainly as if you were his Mess-fellow, and sat at Table with him. Hence we call a Subject dry, a Writer insipid, Notions crude, and indigested, a Pamphlet empty or hungry, a Stile jejune, and many such like Expressions, plainly alluding to the Diet of an Author, and I make no manner of doubt but Tully [i.e., Cicero] grounded that saying of Helluo Librorum upon the same Observation.]

(4) AMAZON ON THE COURTHOUSE STEPS. Classaction.org has another rundown on the lawsuit and a link to the complaint: “Amazon.com, ‘Big Five’ Publishers Conspired to Fix Prices for E-Books, Class Action Alleges”.

…Through its most favored nation clauses with the Big Five, Amazon has required, and the companies have agreed to grant, “prices, terms, and conditions equal to or better” than those offered to the defendant’s competitors. Moreover, Amazon mandates that it be notified about such terms, a requirement that serves to restrict discounts to consumers and stifle innovation in the trade e-book market, the suit claims.

The contractual requirements laid out by Amazon prevent “actual and potential retail competitors from introducing alternative business models, offering promotional advantages, or offering customers lower prices on their own,” the complaint says, summarizing that the agency price model in which Amazon and the Big Five operate has contractually obligated the publishers to more or less do what Amazon says with regard to setting prices or offering discounts.

Further, whereas one would think readers would benefit from the cost reductions related to the low printing and distribution expenses of e-books when compared to printed texts, the high commissions and other costs Amazon charges to publishers all but wipe out those savings, the complaint summarizes:

“Amazon increases the cost of selling e-books by tying its distribution services (e.g., helping consumers find and purchase e-books on the Amazon platform, processing payments, delivering e-books) to its advertising services, which are designed to optimize the placement of advertisements to consumers on its online platform. Amazon further raises the Big Five’s selling costs by manipulating e-book ‘discovery tools to make a publisher’s books difficult to find without the purchase of advertising or refuses distribution unless the publisher also purchases advertising.’”

(5) RESISTANCE IN RUSSIA. In the Washington Post, Robyn Dixon interviews Dmitry Glukhovsky, author of “a cult dystopian sf trilogy” beginning with Metro 2033, who said he was opposed to the Kremlin’s efforts to murder dissident Alexei Navalny and to suppress all opposition to Putin. “Kremlin warns Russians against pro-Navalny protests, drawing pushback”.

The first novel in Glukhovsky’s dystopian science fiction trilogy, “Metro 2033,” set in the Moscow Metro in a post-apocalyptic world, tells a dark story of fascistic leaders who construct a big lie to fool people to keep them trapped underground after a nuclear holocaust. He said he was not a particular Navalny supporter but that it was impossible to ignore the authoritarian turn after what he called “a chain of murderous poisonings,” not only of Navalny but of other Kremlin critics.

(6) NEXT AT BAT. CNN is getting clicks with this headline — “The man third in the line of presidential succession has been in five ‘Batman’ movies”. He’s Sen. Patrick Leahy.

For as many foes as the superhero fends off, Batman has a formidable team of supporters starting with his sidekick Robin, Gotham City Commissioner James Gordon and his ever-loyal butler, Alfred Pennyworth.

But one of the Caped Crusader’s most fervent supporters lies not in a comic book, but in the US Senate, and he’s known the Bat for more than 80 years.

Sen. Patrick Leahy, a Democrat from Vermont and the longest-serving member of the current Senate, is a Batman aficionado who’s turned his fandom into philanthropy. He’s even used the comics to forward his legislative agenda.

Now President pro tempore of the Senate, Leahy is third in the presidential line of succession. Though it’s unlikely he’ll ever have to serve as President, his high-profile position shines a brighter light on his colorful resume — which includes multiple appearances in the “Batman” films….

Leahy’s first foray into screen acting — something he does strictly when Batman is involved — came in 1995, when he appeared in the critically reviled “Batman Forever.” The same year, he voiced a character billed as “Territorial Governor” in “Batman: The Animated Series.”

Since then, Leahy has appeared in nearly as many “Batman” films as the Caped Crusader himself. He usually appears as a scowling politician (though in “Batman & Robin,” which his son Mark also had a cameo in, he was allowed to enjoy a raucous party). He even met an explosive end as the curiously named Senator Purrington in “Batman v. Superman: Dawn of Justice.”

(7) SIERRA OBIT. Actor Gregory Sierra (1937-2021) died January 4. Best known for non-genre TV roles in Barney Miller and Sanford and Son, his genre credits included TV’s The Flying Nun, Mission: Impossible, Greatest American Hero, The X-Files, and the film Beneath the Planet of the Apes, and Honey I Blew Up The Kid. He also appeared in The Wonderful Ice Cream Suit scripted by Ray Bradbury.

(10) HOW SUPER ARE THEY? The Late Late Show with James Corden challenges Watchmen star and One Night In Miami director Regina King to a game of Superhero or Super Zero, in which she meets a lineup of six potential superheroes. After learning each character’s origin story, Regina must decide which are indeed real.“Which of These Are Real Superheroes? w/ Regina King”.

(11) THE GHOST OF BREAKFAST FUTURE. Delish is haunted by the possibility that “A New ‘Ghostbusters’ Cereal Is Coming Soon”.

… The cereal, which is brought to you by General Mills, hasn’t gotten a secured release date yet, but it has popped up as a listed product on Walmart’s website. Quite similar to the original 1980’s Ghostbusters cereal box, this new rendition—which may not be the finalized version—displays the infamous Ghostbusters logo alongside a bowl of reddish-orange crunchy cereal pieces. And, just like the original version, it includes ghost and Silmer-shaped marshmallow pieces to add more sweet nostalgia to your morning.

… What the voice in the chopper knew, but Reeves didn’t, was that besides the wreckage of the ill-fated B-52, somewhere out there in the winter darkness lay what the military referred to as “broken arrows”—the remains of two 3.8-megaton thermonuclear atomic bombs. Each contained more firepower than the combined destructive force of every explosion caused by humans from the beginning of time to the end of World War II….

(13) WORMHOLES. This 2019 Astronomy.com article ponders the question “If wormholes exist, could we really travel through them?”

…Wormholes, thus, are the perfect way to bypass Einstein’s speed limit, and get your heroes and villains to travel the galaxy in a reasonable time frame. Plus, they allow for the element of time travel to enter the story, all without breaking any laws of physics.

So, the real question is: Can actual people take advantage of wormholes too? The answer is… maybe?

The first problem for any explorer determined to survey a wormhole is simply finding one. While Einstein’s work says they can exist, we don’t currently know of any. They may actually be impossible after all, forbidden by some deeper physics that the universe obeys, but we haven’t discovered.

The second issue is that, despite years of research, scientists still aren’t really sure how wormholes would work. Can any technology ever create and manipulate them, or are they simply a part of the universe? Do they stay open forever, or are they only traversable for a limited time? And perhaps most significantly, are they stable enough to allow for human travel?

The answer to all of these: We just don’t know.

Scientists in Taiwan noticed odd, L-shaped burrows in a set of rocks eight years ago. Since the rocks once sat on the Pacific Ocean floor, they thought the tunnels had been made by shrimp, or perhaps octopuses. But the shape and structure of the burrows didn’t match those made by such creatures, and the mystery lingered.

Now, it’s been solved: The architects behind the tunnels were 6-foot-long worms that lived about 20 million years ago, according to a study published this week. Fossil evidence helped the study authors figure out how these predators hunted and built their undersea lairs.

According to their research, the ancient marine worms would lay waiting under the sand for unsuspecting prey; then when fish passed by, the worms would lunge out of their burrows, snag the swimmers in their gaping maws, and drag the victims under the seafloor….

(15) HINDSIGHT HISTORY. Here’s a video curiosity – the cast of the 1945 Armed Forces short “Time To Kill” [YouTube] about the educational benefits offered by the Armed Forces Institute includes George Reeves, plus DeForest Kelley and Betty White making their film debuts.

(16) VIDEO OF THE DAY. “First Look:  Tom Holland as Peter Parker in Web Slingers” on YouTube is a preview of a new Spider-Man ride coming to Disney’s California Adventure whenever the park is allowed to reopen.

Didn’t get that special something you lined up for on Black Friday? Then treat yourself to this collectible — a George Reeves signed photo of the actor in costume as Superman from the 1950s TV show. Only $5,000, right now on eBay. 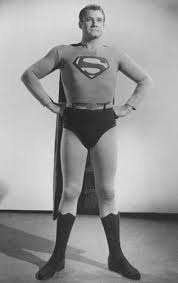 Offered photo has this pose.