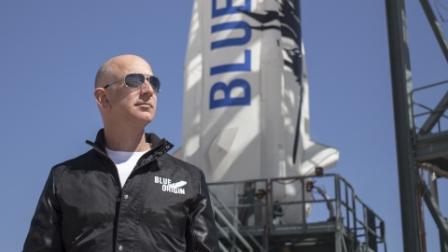 Jeff Bezos, founder of Blue Origin, who was named winner of the Heinlein Prize on June 20, accepted the $250,000 award Wednesday evening at an event at the Smithsonian National Air and Space Museum.

The billionaire pledged to donate the money to Students for the Exploration and Development of Space. SEDS is a nonprofit that aims to help young people participate in space exploration efforts.

Bezos, who was an early member of the Princeton chapter of the group in the early 1980s, said he hoped the organization “would continue to do great work.”

One of SEDS’ founders, Peter Diamandis, won the inaugural Heinlein Prize in 2006 for his efforts in establishing the X Prize, which is aimed at stimulating the development of the commercial suborbital reusable launch vehicle.

“Books have always meant a lot to me, but not as much as they meant to you,” Diamonds joked with Bezos, the founder of Amazon.com who is now thought to be worth more than $60 billion.

The Washington Post published an edited transcript of Bezos’ remarks at the Smithsonian event — “Jeff Bezos on nuclear reactors in space, the lack of bacon on Mars and humanity’s destiny in the solar system”; here are some of the quotes.

On humanity’s future in space:

“I wish there were a trillion humans in the solar system. Think how cool that would be. You’d have a thousand Einsteins at any given moment—and more. There would be so much dynamism with all of that human intelligence. But you can’t do that with the resources on Earth or the energy on earth. So if you really want to see that kind of dynamic civilization as we expand through the solar system, you have to figure out how to safely move around and use resources that you get in space.”

On competing against Musk and other commercial companies:

“Competition is super healthy…Great industries are never made by single companies. And space is really big. There is room for a lot of winners…At Blue Origin, our biggest opponent is gravity. The physics of this problem are challenging enough..Gravity is not watching us and saying, ‘Uh-oh those Blue Origin guys are getting really good, I’m going to have increase my gravitational constant.’ Gravity doesn’t care about us at all. ”

On achieving the impossible:

“I believe the dreamers come first, and the builders come second. A lot of the dreamers are science fiction authors, they’re artists…They invent these ideas, and they get catalogued as impossible. And we find out later, well, maybe it’s not impossible. Things that seem impossible if we work them the right way for long enough, sometimes for multiple generations, they become possible.”

[Thanks to Jeb Kinnison for the story.]