THE BOOK OF JOAN. By Lidia Yuknavitch. (Harper/HarperCollins, $26.99.) In this brilliant novel, Earth, circa 2049, has been devastated by global warming and war.

THE ESSEX SERPENT. By Sarah Perry. (Custom House/Morrow, $26.99.) This novel’s densely woven plot involves an independent-minded widow and the possible haunting presence of a giant serpent.

LINCOLN IN THE BARDO. By George Saunders. (Random House, $28.) In this Man Booker Prize-winning first novel by a master of the short story, Abraham Lincoln visits the grave of his son Willie in 1862, and is surrounded by ghosts in purgatory.

THE POWER. By Naomi Alderman. (Little, Brown, $26.) In this fierce and unsettling novel, the ability to generate a dangerous electrical force from their bodies lets women take control, resulting in a vast, systemic upheaval of gender dynamics across the globe.

THE STONE SKY: The Broken Earth: Book Three. By N.K. Jemisin. (Orbit, paper, $16.99.) Jemisin won a Hugo Award for each of the first two novels in her Broken Earth trilogy. In the extraordinary conclusion, a mother and daughter do geologic battle for the fate of the earth.

(2) BLACK FRIDAY BONUS. Scott Edelman says, “This completely unpredicted, absolutely unanticipated, and totally unexpected new episode—with horror writers Brian Keene, Lesley Conner, Mary SanGiovanni, Damien Angelica Walters, J.P. Sloan, and Eric Hendrixson—is one I had no idea I was going to record until I was about to record it.”

Listen in to Eating the Fantastic where “Six horror writers reveal publishing realities (and more)”: 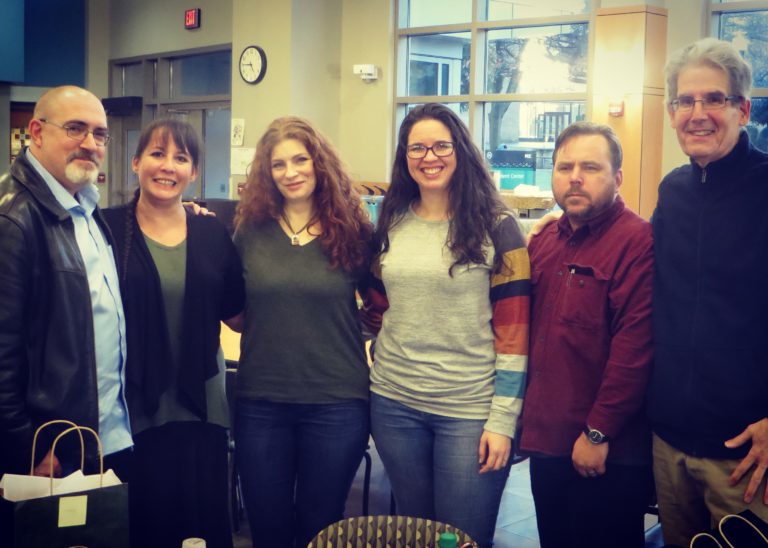 But luckily, since the group had planned to grab a bite to eat after their  panel before they hit the road, we did get to chat while breaking bread together. I was able to sit with them at a large round table in the Frederick Community College cafeteria, and as we inhaled salads and stromboli, I pushed them to share some of the brutal truths of horror publishing, the ones they didn’t reveal on the panel for fear of crushing the hopes and dreams of young, innocent, beginning writers. Which I hope you’ll feel is a good enough excuse to justify sharing the panel itself as part of the episode before that meal.

Scott adds, “The previously announced next episode with comics legend Marv Wolfman will still be uploaded December 1 as planned. I guess this one is a Black Friday bonus! Hope you had a good turkey day!”

(3) WHAT TO DO WITH LEFTOVERS. Did you finish your novel? Pam Uphoff tells you how to spend the rest of the month in “No Mo NaNo”, a rerun at Mad Genius Club.

Welcome to the last week of NaNoWriMo, where we all despair! Let me throw out some ideas that might help you get going again.

(4) HOW INFLUENCERS PROFIT. The Guardian follows the money: “George Takei saga sheds light on the murky world of pay-to-promote news”.

News that several online media companies including Mic, Slate and Refinery29 have severed commercial ties with Star Trek actor George Takei following allegations of sexual assault has shone a light on the little-understood practice of online news sites paying celebrities to post links to their content.

Millennial-focused website Mic reported that it and five other media sites had “ended paid promotion partnerships that once had their articles and videos shared on Takei’s social media platforms” in the wake of an accusation that Takei sexually assaulted a young actor in 1981. Takei denies the claim.

Slate, Refinery29, viral site Upworthy, media brand Good and Futurism all confirmed to Mic that they had cut Takei out of their “social media influencer” networks of paid celebrities and other high-profile social media users who often have millions of followers.

…Top influencers can make $75,000 for a product post on Instagram and a staggering $185,000-plus for a plug on YouTube, according to a report in the New York Times.

For MSTies, Thanksgiving is about Mitchell and Manos: The Hands Of Fate as much as it is about turkey and cranberry sauce. Yes, the traditional Mystery Science Theater 3000 Turkey Day marathon just wrapped up its 11th edition on Shout Factory TV, and with it comes an exciting bit of news: MST3K: The Return has been renewed for a second season on Netflix! (That’s the 12th season overall, for those of you who are keeping count—which is presumably everyone reading MST3K news late at night on Thanksgiving.)

But few movies are as simultaneously wonderful and dumb as Battleship, which is, in a very slight big dumb action movie way, a little bit subversive. Yes, it has a very pretty, hardheaded, relatively attractively frowny white guy as its lead, but it introduces him via a misguided quest for a chicken burrito and then spends the rest of the movie illustrating the many ways in which we are all doomed if he cannot take a breath and listen to other people. And fast. Battleship is two hours of exploding boats and alien frog-ship-things and some solid infrastructure damage for good measure, but it’s also two hours of international cooperation and heroics—from people who are not often the big damn heroes.

(8) EVOLUTION OF CLICKBAIT. Darwin would be proud: “Galapagos finches caught in act of becoming new species”.

This new finch population is sufficiently different in form and habits to the native birds, as to be marked out as a new species, and individuals from the different populations don’t interbreed.

Prof Butlin told the BBC that people working on speciation credit the Grant professors with altering our understanding of rapid evolutionary change in the field.

In the past, it was thought that two different species must be unable to produce fertile offspring in order to be defined as such. But in more recent years, it has been established that many birds and other animals that we consider to be unique species are in fact able to interbreed with others to produce fertile young.

“We tend not to argue about what defines a species anymore, because that doesn’t get you anywhere,” said Prof Butlin. What he says is more interesting is understanding the role that hybridisation can have in the process of creating new species, which is why this observation of Galapagos finches is so important.

What if Oscar the hero had fathered a child during his one-night stand? Does a father have no moral obligations running to a child, to love, to cherish, to protect, to see to its upbringing? The mother of Moses sent her babe off in a basket down the river because the soldiers of Pharaoh were coming to kill it; but Oscar here apparently is sending his child down the river because he wishes to enjoy a momentary sexual pleasure with an unnamed woman, and because he does not wish to offend ugly customs of outlandish people.

I look at the perfect face of my own cherubic child, and I wonder, what kind of man would let his child be raised as a bastard by strangers? If the child is a daughter, will she be sent to whore around with other wondering heroes?

If the customs of the land had demanded our hero sacrifice a captive to Tezcatlipoca, would his bitchy girlfriend have brow-beaten him into doing that, too?

The bitchy girlfriend turns out to be an Empress, and she marries the hero. I must laugh. What kind of girl would marry a man (or even give him the time of day) after he has sported with harlots? How did Clytemnestra react when her husband lord Agamemnon come back from the wars, having slept with many a golden slave-girl from Illium? She killed him with an axe in the bath. Compare Heinlein with Aeschylus. Who do you think knows more about how women really act?

(11) A WRITER’S CAREER PATH. This new theory tries to account for what we’ve been seeing.

"Please accept my manuscript, attached to this email. Per your rules, I have not acquired an agent, but instead I have sent 20 trolling tweets to @tinytempest. Screenshots attached. Please tell me I'm good."

(12) THERE WERE NEVER SUCH DEVOTED SISTERS. And this was news to me.

To be fair, sometimes Facebook tags photos of me as you. So you're asking them to be smarter than a random algorithm.

I know! As with this photo where we are indistinguishable. pic.twitter.com/FOObqqp1TT

(13) WEIR INTERVIEW. I think I’ve had enough of Andy Weir for awhile, but maybe you haven’t: from Reason.com, “The Martian‘s Andy Weir Talks Economics (and Sex) on the Moon in Artemis: Podcast”.

“One thing we’ve learned from The Phantom Menace is don’t start a story with a dissertation of economics,” says Andy Weir, author of The Martian. Last week he released a new novel, Artemis, about a settlement on the Moon. Where The Martian, which was turned into a blockbuster starring Matt Damon, is powered by plot-driving engineering mishaps and triumphs, Artemis gave Weir a chance to unleash his inner “economics dork.” The political economy of the moon is a fascinating part of the new book, featuring guilds, crony capitalism, reputation mechanisms, a non-state quasi-currency, sex tourism, smuggling, and more.

(14) THESE AREN’T THE DRUNKS I’M LOOKING FOR. The Washington Post’s Fritz Hahn, “A Stormtrooper checks your ID at this new Star Wars-themed pop-up bar”, describes the opening of The Dark Side Bar, a pop-up bar that has opened in Washington, Manhattan, and the Chinese Theatre in LA. The idea, says creator Zach Neil, is “that you’re in a bar inside the Death Star, or a bar where a Stormtrooper would go after work and complain about how mean the Emperor was that day.”  Entertainment includes trivia nights, “alien speed dating,” and burlesque with “sexy aliens.”  But don’t expect any Skywalker cocktails or t-shirts for sale because this bar is NOT authorized by Lucasfilm.

Once you’re in, the house cocktails are not the cocktails you are looking for. The Red Force and Blue Force are college-party sugar bombs — the latter is Hendricks Gin, blue curacao and a sugar rim — with glow-in-your-glass ice cubes. The Imperial sounds promising, with spiced rum, maple syrup, lemon and a dash of cayenne pepper, but it was as balanced as the Force at the end of “Revenge of the Sith.” You’re better off ordering a regular cocktail or a can of DC Brau.

(15) ERADICATOR OF ERROR. Wonder Woman drops some knowledge in Galsplaining with Gal Gadot.