By Bence Pintér: As a historian and journalist, I always found pleasure in flipping through old newspapers. In these times of lockdown, I happened to be fooling around in Arcanum Digitheca, Hungary’s “largest and continuously expanding” digital periodical database, looking for traces of old Hungarian fandom in the papers.

That is an interesting story, I thought, then googled “jan howard finder file770”, since I never heard about him before, but was sure that I would find something here, and boy, was I right! So I gathered that maybe some of the readers of File770 could be interested in what jan howard finder told to the budding Hungarian fandom about Tolkien. But first let me present you some context with a little the help from Pálma Erdei’s fine dissertation about Hungarian sci-fi and fandom.

In Communist Hungary fannish activities seemingly preceded the official recognition of science fiction: the first Hungarian fanzine was created in 1968 at Berzsenyi Dániel High School, while the first state-approved science fiction collection, Cosmos Fantastic Books started publishing in 1969 at Móra, which was a publisher mainly of children’s fiction. (Of course there were some science fiction books published before this collection in the country, but few.)

The science fiction clubs also preceded Cosmos Fantastic Books: apart from the fanzine-making guys at Berzsenyi High, the first was founded in 1968 mostly by scientists, members of the Society for Dissemination of Scientific Knowledge (TIT is the Hungarian acronym for that one). At the end of 1973, TIT got 600 members, a network of clubs in major cities in Hungary, and a rather good fanzine named Pozitron.

The title of the article is ‘A fantázia új útjai’ (The New Ways of Fantasy), but you should know  that in Hungarian with ‘fantázia’ does not mean the genre, because we call that simply ‘fantasy’. Besides that, science fiction is also called ‘tudományos fantasztikum’, in which the first part means scientific, and ‘fantasztikum’ is a broader term which means sci-fi, fantasy and horror.

The journalist describes jan howard finder (an American chemistry teacher from West Germany, we are told) a ‘sci-fi specialist’ and a Tolkien-expert, then goes on to wonder about why The Lord of the Rings is science fiction. The answer to this question (drawn from finder’s lecture) is a bit confusing, since it do not try to sell LotR as sci-fi, but goes on detailing the plot. I assume that the translation was not really accurate, and/or the journalist was confused by these terms. Fantasy was not a thing in Hungary then, and rather similar ‘fantasztikum’ meant sci-fi as well.

I would not bore you with the plot summary, but it is funny: it’s like if I want to summarize LotR to my four-year-old. “…in the story there is a ring, which has various magical powers, and which was lost by the leading evil magician. The good side find the ring, but if somewone wears it, he is corrupted…” And so on and so forth. Later the journalist quotes finder to say: LotR is the reason why Western universities started to research science fiction, and also LotR is responsible for the rise in quality in science fiction.

The he goes on to describe Arrive at Easterwine: The Autobiography of a Ktistec Machine by R. A. Lafferty, The Andromeda Strain by Michael Crichton, and Zone Null by the Austrian Herbert W. Franke, which is wrongly attributed in the article to the German Wolfgang Jeschke. (There is a reason for that: the novel was in one volume with Jeschke’s short story collection.)

The journalist ends the article in this fashion: “One thing is sure: true SF does not mean space mysteries and space pulp anymore. The fans of SF only read sci-fi books sophisticated in style and message nowadays.”

While The Lord of the Rings was already a bestseller in 1973 for years, this is the first article in the Hungarian database which even mentions the massively successful book and its author. The Hobbit was published in 1975 in Hungarian, but until the publication of LotR in 1981, there were a total of six articles mentioning the book briefly. (One bears the title “Who is the Most Boring Writer?”, and is a translation of an article about which author is the most boring according to some students.) So it is no exaggeration to say that jan howard finder was like an evangelist prophesizing about a book that will be massively popular in Hungary also – twenty or thirty years later.

There is a quote from translator of the lecture in the article, who told the journalist that she wants to translate LotR, but it will be hard. In fact she will not be the one to translate the epic: most of the geographical and other names, and the first eleven chapters was translated by noted translator Ádám Réz, while the rest of the book was translated by future president Árpád Göncz (prose) and famous poet Dezso Tandori (poetry).

[Editor’s note: WordPress does not support one of the characters in Tandori’s first name, therefore a Latin character has been used instead. Apologies for the incorrect spelling. Also, finder spelled his name using lower case letters, thus the headline.] 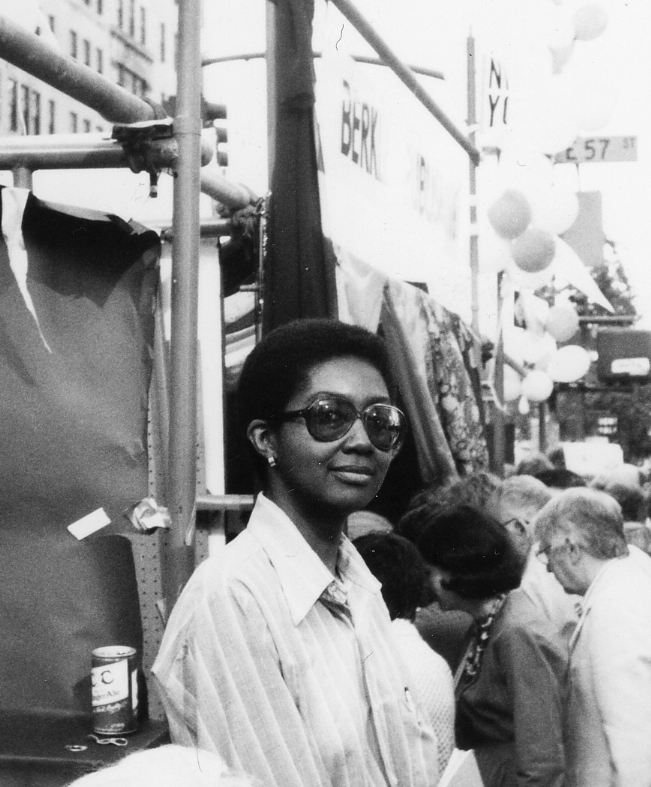 People are sharing memories of the late D Potter, a long-time fanzine fan who passed away October 25 in Oakland.

She lived in New York in the early 1980s, when these photos by Andrew Porter were taken.

That also was the period when she was Fan GoH at Balticon 16. It occurred to me they must have run a bio of her in the program book, and BSFS’ Dale Arnold very kindly connected me with this wonderful 1982 tribute by Avedon Carol. 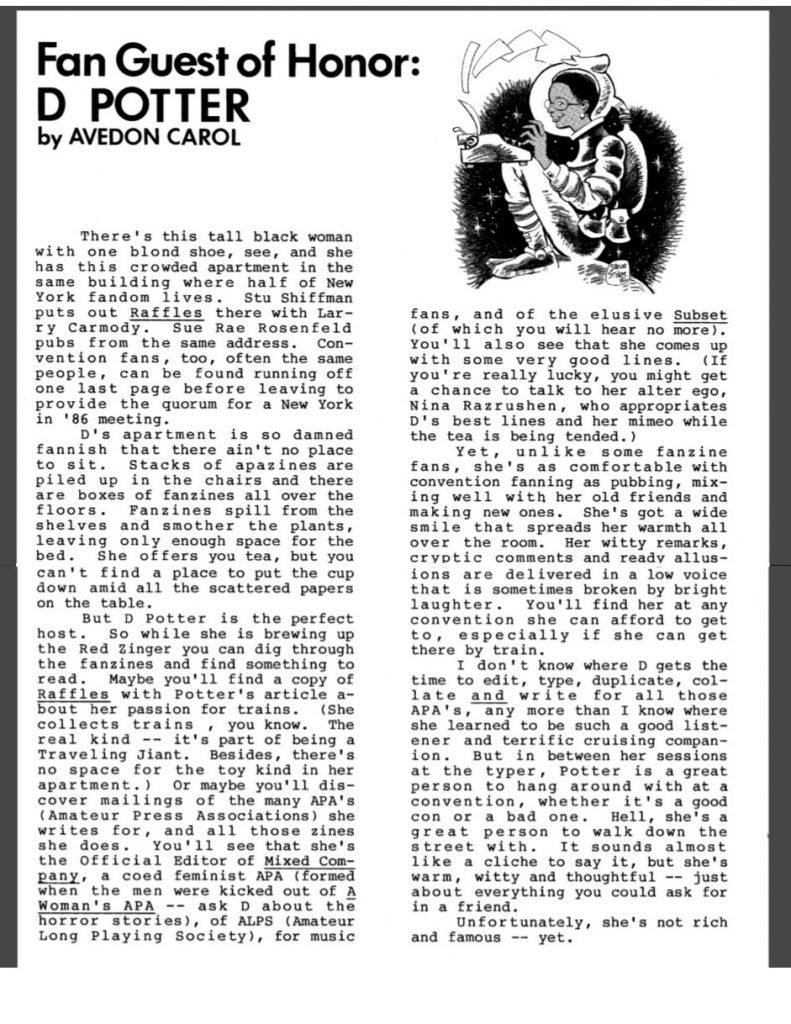 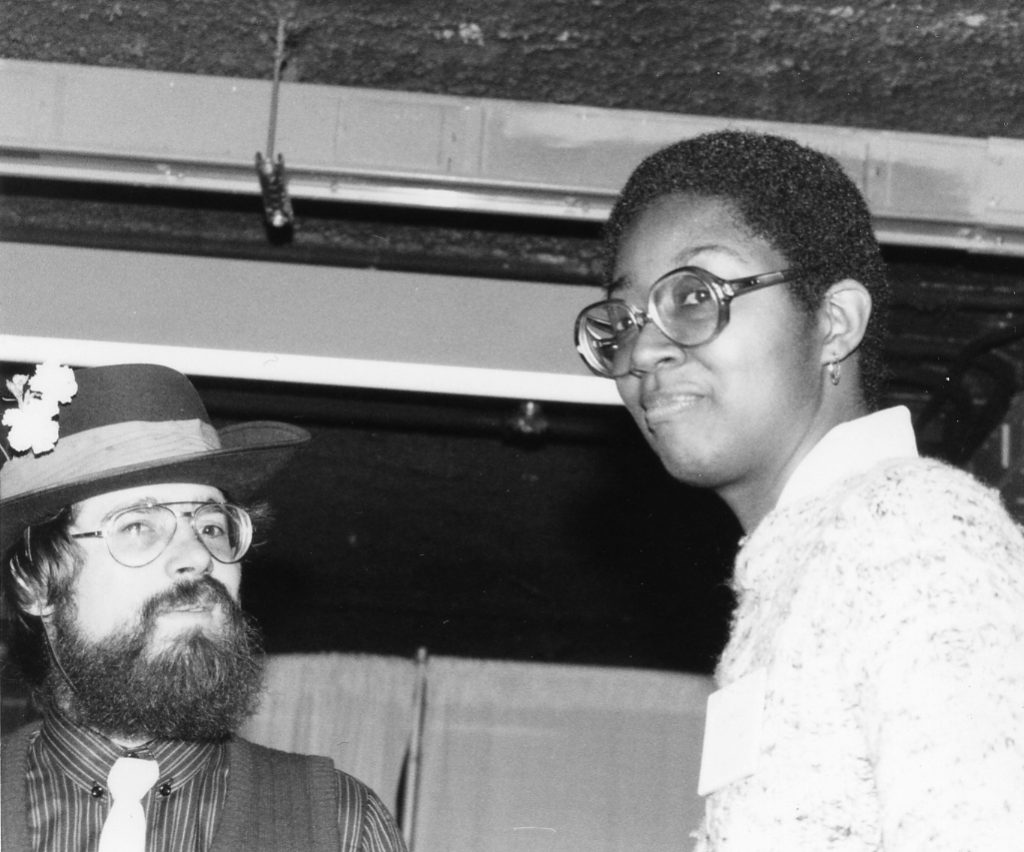 WombatCon was what I wanted it to be. Friends old and new, gathered to sit and talk. There were some stories about jan, but mostly there was just friends, old and new, talking about whatever friends talk about. Perfect.

The display I put together of a sample of jan’s life got the reaction I wanted. A whole lot of people said, “I never knew jan had/did/was…” As I was cleaning up the house and finding some of these things, I said pretty much the same.

Lin Daniel is holding a jan howard finder Memorial and Irish Wake, aka WombatCon, on June 1 in Albany, New York.

This deserved a post of its own post to amplify Lin’s announcement in the comments section of Wombat’s obituary.

Please come. I would love to see you, to meet you for the first time, or meet you in person. If you cannot attend, but wish to share your memories of jan, please reply to this email. I’ll be posting material to jan’s blog.

Lin is still writing new material for The Real Wombat, such as —

Archeology At Jan’s House just turned up… *drum*roll*please* jan’s grade school report cards. With things like “needs improvement in self control” and under “promptness” the note “stalls”. All I can say is the man was consistent.

[Thanks to Lin Daniels, Steven H Silver and Andrew Porter for the story.]

jan howard finder (“Wombat”), one of fandom’s great characters, died February 25 at 12:54 a.m. in Albany Medical Center Hospital CCU from renal and liver failure. He had been battling prostate cancer for several years.

Lin Daniel reports she and a friend were with jan when he died. “We probably had the hospital staff wondering about us, because we sat there and told stupid jan stories and laughed a lot.”

He was a conrunner, costumer and Tolkien fan. He toured New Zealand’s LoTR film locations in 2004 and 2006, and bent every effort to get Guillermo del Toro to agree to put him in The Hobbit when the director was still attached to the project.

Appropos of his nickname, jan’s best-known publishing project was Finder’s Guide To Australterrestrials, a 28-page collection of sketches of antipodean creatures done by sf and fan artists.

jan was a guest of honor at the 1993 Worldcon, ConFrancisco.

[Thanks to Michael J. Lowrey for the story.]

“Leadbeater’s Possum,” by Katherine Wadey for Finder’s Guide To Australterrestrials.

By John Hertz: Lunacon is hosted annually by the New York S-F Society, the Lunarians. Lunacon LII in 2009 was March 20-22 at the Hilton Rye Town, Rye Brook, N.Y., fondly known as the Klein Bottle Hotel because the fourth floor is the seventh floor and the green grass grows all around.

The Forry Ackerman memorial was Sunday morning at 10. Lee Gilliland moderated Louis Epstein, Dennis McCunney, the Wombat, and me. Dave Kyle was attending the con but not staying in the hotel. We asked him to join us but he couldn’t get his car through the multi-dimensional barriers in time.

Without Kyle, everyone on the panel was much younger than Forry. I thought this showed how he reached into the future. The Wombat had met him in 1973 – when Forry had already been an active fan almost forty years.

Lenny Provenzano in the audience had some photos of Forry and his house the Ackermansion on a laptop computer. Failing to get a big screen and a projector we put the laptop on the table and crowded in. Forry would have found some way to joke about the laptop turning into a desktop and no doubt being a were-computer.

Gilliland who is active in Man from U.N.C.L.E. fandom remembered Forry in “The Vampire Affair”. He had many cameo appearances. Epstein who co-founded the National Tolkien Society remembered Forry in the 1981 edition of Tolkien’s letters. Forry was an agent for an early project to film The Lord of the Rings. Tolkien’s comments are pungent today.

I told how Forry had co-founded the Big Heart Award. When he stepped down from administering it after fifty years, we could finally give it to him. He won the first fan Hugo. When he was called to the stage he said “But I really think this should go to Ken Slater” and walked away.

Once Forry was driving Walt Willis across the country. Just thinking of those two punsters together staggers the mind. In Wyoming he told Willis they should visit Cheyenne because of its literary reputation. Willis said he didn’t know it. “What!” said Forry, “you haven’t heard of Cheyenne’s fiction?”