(1) Just finished Ancillary Mercy tonight. What a cast of characters!

(2) The ultra-premium all-access pass to the Salt Lake Comic Con is pricey, but not as much as the cost of getting indicted for trying to scam your way into its VIP area.

A federal grand jury has indicted a Layton man, accusing him of impersonating a federal agent to get VIP access to Salt Lake Comic Con.

The indictment, handed down late Wednesday, accuses Jonathan M. Wall, 29, of pretending to be a Special Agent of the Air Force Office of Special Investigations. In a statement, the U.S. Attorney’s Office for Utah said Wall then demanded Salt Lake Comic Con allow him in “under the ruse that he was entering the VIP area to apprehend a wanted fugitive.”

Wall attracted the attention of a retired Salt Lake City police officer who was providing security for the event, the U.S. Attorney’s Office said. The officer questioned Wall and notified the Air Force, who also came to question him.

Wall is charged in the indictment with impersonation of a federal officer and making a false statement to a federal agent. If convicted, he faces a combined seven years in prison and a potential $250,000 fine for each count. Wall has not been arrested, but a summons will be issued for him to appear in federal court, prosecutors said.

Incidentally, the indictment reveals that the “false statement” he made was lying about asking for ONE pass when he actually asked for TWO!

(3) And to think no one will be indicted for telling the even bigger whopper that there are people who think The Martian is a true story.

"Is this a true story?" – The woman next to me said to her date at The Martian last night.

(4) It’s a Big Idea, but it’s also a great news story – how did Ctein and bestselling detective novelist John Sandford wind up collaborating on an sf book, Saturn Run?

That Big Idea led to a Big Problem. How the hell do you get a ship to Saturn in under six months, not to mention building it in under two years? No “wantum mechanics” (Greg Benford’s wonderful term for totally-made-up science shit); it’s not much of a hard bolts-and-rivets thriller if people know you’re faking it. It wasn’t an unsolvable problem. John could research it. In his former life he was a Pulitzer Prize winning reporter and has written forty or so thrillers, so he knows research. It’d just take several years of his life to get himself fully up to speed, that’s all.

The hitch was, John’s steady gig is turning out two novels (plus change) each year like clockwork. His readers expect it. He can’t take off a couple of years to explore himself as an author. This led to John’s second Big Idea, the crazy one.

Why not write it jointly with his friend, me?

Ctein includes an entertaining version of his phone call when Sandford talked him into collaborating. 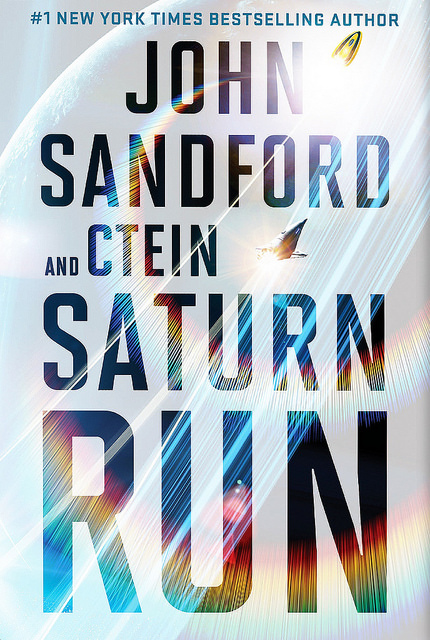 (5) Joe Tonelli on Digg advises about “The Best (And Worst) Movies To Watch On Paramount’s New YouTube Channel”.

Trigger Warning: Splash page has a big movie poster image that looks like Dolph Lundgren auditioning for the role of Aatr’s tits….

Mark no-last-name says, “For some reason the reviewer needs no less than 3 choices for worst SF movie. I can’t argue with him about Masters of the Universe though, even at a young age I could tell how badly that movie stank.”

One of the free sf films in the Paramount Vault is Conquest of Space , which is somewhat hideous despite being based on Willy Ley’s classic book with illustrations by Chesley Bonestell.

(6) SF Site News reports artifacts from the collection of Ray Harryhausen will go up for auction on October 17.

Harryhausen was known for his work in stop-motion animation and worked on films such as Clash of the Titans, The Seventh Voyage of Sinbad, and Jason and the Argonauts. Auction items include models, paintings, and cameras, many of the objects autographed by Harryhausen.

There are loads of photos of the items at Dangerous Minds.

(7) Congratulations to Taral Wayne for placing his William Hope Hodgson tribute “The Canaries in the Dark” in the second volume of The Yellow Book from Oldstyle Press. There’s no pay, he says. However, I was one of the people that recommended he try it on a fiction market instead of settling for a fanzine appearance, so I say well done.

(8) In “Stephen Hawking answers July questions on Reddit AMA” we are reminded about a truth we already know – these memories are indelible for the fan, not the celebrity.

He responded to just nine questions, taking time to answer one from a Canadian poster who said he’d seen Hawking in 1995 as a boy at a video rental store in Cambridge, England, where Hawking lives. The poster asked if Hawking remembered watching “Wayne’s World 2” on a store monitor while parked for about 5 minutes next to two kids. He answered simply, “No.”

Non-book readers might want to look away now while we break down the hidden context of the new one sheet.

According to Wired who debuted the poster yesterday, the image serves a dual purpose as a propaganda poster for the District 13 rebellion in the movie, as well as promoting the IMAX release of the film which is actually coming to the UK a day early on 19 November.

The director of fantasy and horror films keeps his collection of books, gory props and mannequins where he can see, and be inspired by, them.

The door swings open and there, surrounded by blood-red walls, is a hellhound with four hooded eyes and gaping fangs. The head of Frankenstein’s monster floats, disembodied and huge, a story above it. Peering at you from the living room, his fingers paging through a book, is the early-20th-century horror novelist H.­P. Lovecraft. On a Victorian sofa, a demented doll stares down a bronze gargantua, Uncle Creepy and Cousin Eerie.

Bleak House is what Mr. del Toro, the Mexican filmmaker known for the terrifying fantasy of “Pan’s Labyrinth” and American action-horror series like “Hellboy,” christened this pad, which serves as repository and inspiration. He writes there, and when he is in production, a handful of designers work in the repurposed garage. “We draw, draw, draw,” he said, every frame as detailed as animation.

(11) Here’s a candidate for the most expensive toy of the coming Christmas season — Disney’s $120 attempt to make your kid feel like Iron Man. 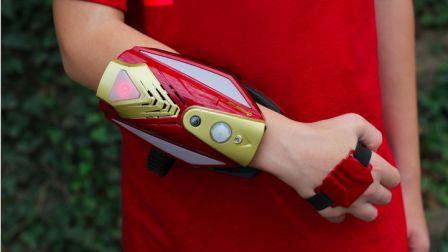 The starter pack for Disney’s first line of Playmation toys, based on the Avengers, costs $119.99, and requires 12 AA batteries. The main toy is the Iron Man arm gauntlet, but you’ll also get two action figures and electronic bases for them to stand on while they interact with you.

Skeptic John King Tarpinian thinks, “With twelve batteries the kid could not lift his arm.”

(12) And toys for the grown-ups include HP’s Star Wars- inspired laptop and Stream notebooks.

While we aren’t exactly short of Star Wars products popping up prior to the big movie release, HP does win our “coolest new laptop of the year award” hands down. And only Star Trek fans will probably disagree.

Featuring a “battle worn” finish which is supposed to remind you of how crummy the Death Star is, the Special Edition is also embellished with Aurebesh typeface. Even the touch pad “mirrors the X-Wing Star Fighter Guidance System” while the keyboard features red backlit keys.

Mike Farrell and Robert Foxworth are in the Equicon assemblage, because they had just starred in the Roddenberry pilot, The Questor Tapes.

The members of S.T.A.R. San Diego ran Equicon 75 at the El Cortez Hotel, with most of the Star Trek cast attending as guests. The “Captain” in the TV ad is now-famous science fiction author Greg Bear.

[Thanks to Dave Doering, Will R., James H. Burns, John King Tarpinian for some of these stories. Title credit goes to File 770 contributing editor of the day Will R.]