Night Shade Books, which has struggled for years, now proposes to sell its assets to Skyhorse Publishing and Start Publishing if its authors will sign off on a deal that might pay amounts currently due authors but dramatically reduces their prospective income from books under existing NSB contracts. SFWA has recommended acceptance.

Michael Stackpole has analyzed the offer in detail and is not inclined to agree:

NSB recently sent a letter to all of their authors announcing that they were in negotiations with Skyhorse Publishing to complete an “acquisition of assets.” In essence, Skyhorse would pick up all their assets, assume none of their liabilities, but would pay NSB a sum of money which, according to the letter, would pay off outstanding debts to authors. If such a sale cannot be completed, NSB states clearly that they’re broke, and that who knows what a Bankruptcy Court will do with author property in any settlement.

I understand that SFWA may be in favor of this settlement because it means that authors will get money. And the vision of books and rights languishing while a bankruptcy court is deciding what to do is horrifying. The reality there is that the books, as assets, could be scooped up by Skyhorse or anyone else at fire sale prices, with the authors getting none of the money they’re owed. At least, in that case, the new owner would be bound by the original terms of the contract, which are decidedly better than these.

The literary agent who writes as The Brillig Blogger thinks the offer lacks credibility:

So the first thing to notice is that the letter starts with a sentence that, um, nightshades the truth: “Night Shade Books has had a difficult time after the demise of Borders.”

Let’s be clear. For all the artistic contributions Night Shade has made to sf literature, it’s had problems paying royalties that go back five years. For those five years, they have repeatedly promised better things, adding new staff or new systems. I can’t call this opening sentence a lie, because Night Shade has certainly had a difficult time after the demise of Borders. But since Night Shade’s authors have have problems with royalties that long predate the final days of Borders, it is disingenuous.

On October 8, the Eclipse series will be available online free of charge at Nightshadebooks.com. Following the lead of other short fiction publications, Eclipse will continue its fifth and subsequent volumes as a primarily electronic publication.

Jonathan Strahan, editor of more than 20 anthologies and collections, says:

We’ve taken the dream of Eclipse — that idea of the rare and unusual, the strange and eldritch — and we’ve stripped it down and rebuilt it for a new decade. Now we’re taking it out for a spin. There may be things added to it in the coming months, and things removed, but at its core there will be at least two new stories every month, the best I can find by the most exciting writers in the field.

Eclipse Online will be a free, online publication – not requiring a subscription or sign-up — with a story released by Editor Jonathan Strahan every first and fourth Monday of the month. 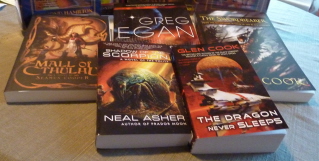 Teasing other bloggers who lovingly photograph their free review copies (in Cancel the Riot) seems to have gotten me noticed by publishers. So I borrowed Diana’s digital camera to record this influx of freebies for posterity. The photos aren’t terrific — it looks like I need a lot more practice before I get really good at posing books. (That was subtle, Mike.)

Thanks to Night Shade Books for an interesting batch — I’m already halfway through the reprint of Glen Cook’s The Dragon Never Sleeps. Nothing rivets my attention like a John Berkey cover.

I’m also amazed at the generosity of Stephen Haffner (Haffner Press) who sent three Edmond Hamilton collections — these are superbly-made books. They’ll make a great introduction to the master’s work. 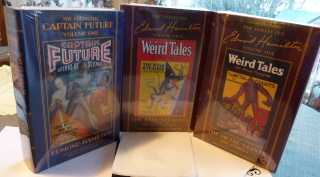