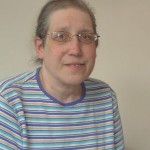 Susan Kahn, who often ran registration at Lunacon with her husband, Richard Ferree, and the organized the Den at numerous Philcons, died June 9 after a year-long struggle with pancreatic cancer. She was 54.

Kahn practiced pediatrics for over 25 years. She also was president of the Sinai Free Synagogue, where her funeral service was held on June 11.