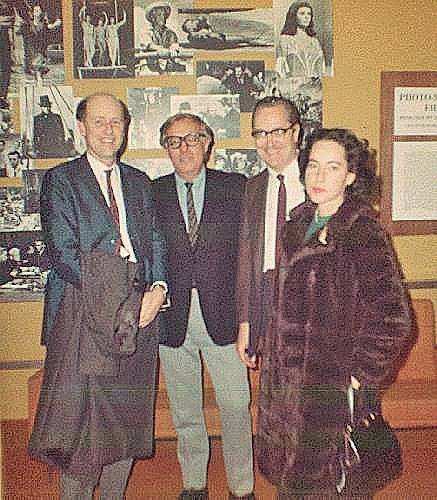 Three decades later Bradbury, by then a seasoned author with dozens of publications to his credit, became a highly valued writer at the Knopf firm. During the 1970s he worked closely with editors Robert Gottlieb and Nancy Nicholas, who published his Where Robot Mice and Robot Men Run Round in Robot Towns, Dandelion Wine, and When Elephants Last in the Dooryard Bloomed, among others. In a letter to Nicholas (shown in the slideshow above), Bradbury, who often wrote nostalgically of childhood, included a picture of himself at the age of three. He jocularly describes the photograph as “beautifully serious, as if the young writer had just been disturbed in the midst of some creative activity.”

(2) WORTH A THOUSAND WORDS. There are 32 “Pictures and Photos of Ray Bradbury at the Internet Move Database site.

(4) MUSICAL MARTIAN CHRONICLES. You may have read Ray Bradbury’s The Martian Chronicles, but now’s your chance to hear it.

The newEar Contemporary Chamber Ensemble performs a Bradbury-inspired piece called The Martian Chronicles, an original composition written by UMKC professor Paul Rudy. Bradbury published The Martian Chronicles in 1950. A collection of interconnected short stories about human colonization of Mars, the book is widely regarded as an iconic work of science fiction. This performance blends intricate notated music (including pre-recorded electronics) with jazz-style free improvisation in an effort to capture the spirit of one of Bradbury’s most popular and captivating books.

“This is my attempt at mapping some ideas from Bradbury’s book onto a socio-political statement of contemporary culture – our world of conformity,” says Rudy. He adds that the improvisational saxophone riffs express the importance of freedom of ideas – a thematic element that Bradbury carried through Fahrenheit 451, as well. It is this blend of controlled expression and unrestrained creativity that makes any performance of The Martian Chronicles a one-of-a-kind experience.

(5) WRITING CONTEST. The MPCL is running 4-5-1: A Bradbury-esque Writing Challenge.

As part of our Big Read celebration, MCPL’s Story Center will sponsor a writing contest to showcase – and reward! – Bradbury-esque writers in our community. The twist?

All short story submissions must be no more than 451 words long. All contest entries must be original creative works submitted via email to wn@mymcpl.org between March 15 and April 30, 2016.

In the book Zen in the Art of Writing, Bradbury described a prompt he employed early in his writing career.

He made lists of nouns as triggers for potential stories. The lists were something like this: The lake. The night. The crickets. The ravine. The attic. The basement. The trapdoor. The baby. The crowd. The night train. The fog horn. The scythe. The carnival. The carousel. The mirror maze. The skeleton.

This method kept him unblocked, writing and would someday churn out the storyline for Something Wicked This Way Comes.

Your original work could begin with one of the nouns from Bradbury’s list, or you can create your own list.

If you’re on Twitter, reply to the Twitter handle @YouAreCarrying with the word “inventory” and you’ll receive a list of nouns in reply. Whatever your inspiration, the story should be inventive, transporting and vivid. All entries will be considered for an anthology collection of contest submissions, which will be published by the Woodneath Press.

In recognition of Ray Bradbury’s powerful belief in the importance of creativity and imagination, MCPL is hosting a contest for teen artists to share their own vision of a powerful and imaginative invention from the pages of Fahrenheit 451: the Mechanical Hound, which plays a pivotal role in the story and gives it a stronger sci-fi feel.

Submissions should be single images no larger than a standard sheet of paper, which shows the artist’s depiction of the Mechanical Hound; any medium and style (including line art, black-and-white, acrylics, digital art – anything!) is acceptable.

The contest officially kicks off on April 16, coinciding with MCPL’s annual Access Art event and will conclude on April 30. An announcement of the winning artist will soon follow.

The winning artist will be selected by visiting artist Tim Hamilton and will receive a signed copy of Hamilton’s graphic novel adaptation of Fahrenheit 451.

Rules: This contest is open to students in 6th through 12th grade. All contest entries must be original creative works submitted with the Big Read Big Art Contest form to an MCPL branch between March 16-April 30, 2016. Entrants agree to allow MCPL the right to post submissions to its website and to reproduce it for promotional purposes.

(7) GOODREADS DISCUSSION. The MPCL is running a discussion of the Bradbury novel at Goodreads.

MCPL will also host an ongoing online discussion on Fahrenheit 451 on the MCPL Goodreads page moderated by Mariah Hone, Assistant Manager of the Information and Reader Services Department at MCPL. This Goodreads group is lively and active, and the discussion is available for readers to jump in at any time while MCPL celebrates The Big Read.

(8) KEYNOTE SPEAKER. Critic Michael Dirda will present “The Future as Nightmare: Dystopian Visions Before and Since Fahrenheit 451” on April 7. (Register)

Fahrenheit 451 weaves together so many important issues and compelling themes that some readers may not recognize this seminal novel as dystopian science fiction – the same literary vein that has attracted readers to The Hunger Games and Divergent series as well as others.

Pulitzer Prize-winning literary critic Michael Dirda discusses the dystopian vision of Fahrenheit 451 (which is at times eerily prescient) and places it within the broader context of its entire genre, which has its roots in 19th Century England. An engaging conversationalist with a wealth of literary knowledge at his fingertips, Dirda will also trace the influence Bradbury has had on contemporary authors in this presentation developed specifically for Mid-Continent Public Library.

Dirda earned a Pulitzer Prize for Criticism for his book reviews published by The Washington Post. He is the author of several books about great writing and the reading life, including: Bound to Please; Classics for Pleasure; On Conan Doyle (which earned an Edgar Award from the Mystery Writers of America); and most recently, Browsings: A Year of Reading, Collecting, and Living with Books. The Paris Review calls Dirda “the best-read person in America.”

Award-winning artist Tim Hamilton discusses the challenges and rewards of adapting Fahrenheit 451 into a graphic novel, a project endorsed by Ray Bradbury. Hamilton will discuss his artistic process as well as what it is about this classic sci-fi story that made him want to update it for contemporary readers.

Hamilton’s 2010 graphic novel adaptation of Fahrenheit 451 was nominated for an Eisner Award for Best Adaptation.

Hamilton’s work includes a graphic novel adaptation of Treasure Island for Puffin Graphics. His work has been featured in The New Yorker, The New York Times, and Mad Magazine while other clients include Marvel, DC Comics, and Dark Horse. He lives in Brooklyn and was once a clue on the quiz show Jeopardy.

[Thanks to Europa SF and John King Tarpinian for these stories.]

Tim Hamilton, creator of Ray Bradbury’s Fahrenheit 451, The Authorized Adaptation, will appear at the Santa Barbara Public Library on Thursday, October 22 at 7 p.m. Hamilton will give a presentation on his process in creating the art for his graphic novels and other work. Book signing follows.

The library will also be welcoming science fiction film fans to free public screening of Something Wicked This Way Comes on Sunday, October 25 at 2 p.m.

The Central Library is located at 40 E. Anapamu St. in Santa Barbara.