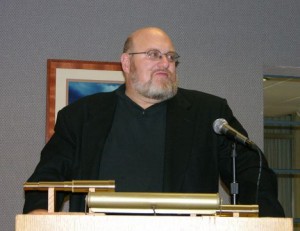 William Tienken at the 2004 Campbell Conference. Photo by Keith Stokes.

Sercon fanzine editor William Tienken died February 17 in Topeka, KS. He was involved in Kansas City fandom, attending KaCSFFS meetings and local conventions. He also was a member of the Chronicles of the Dawn Patrol.

Between 1987 and 1997 Tienken published 500 issues of Pulsar, writing 2,500 reviews of sf and fantasy books. From 1997-2011 he produced 313 issues of its successor, an online zine titled Bookview, which covered nonfiction books of all types.

The cause of his death has not been announced, however, over the years Tienken often noted in Bookview that he was receiving dialysis treatments and had health problems.