A statue of Ray Bradbury astride a rocket ship was unveiled on Thursday, the author’s 99th birthday, outside the Waukegan Public Library in his hometown. Zachary Oxman’s creation “Fantastical Traveler” was the culmination of a project begun in 2015.

Chaired by Richard Lee, retired executive director of Waukegan Public Library, the Ray Bradbury Statue Committee set out to commemorate Ray Bradbury’s legacy in his hometown of Waukegan, Illinois. The $125,000 project was primarily financed through donations from all over the world. An honorary member of the Committee, Jonathan R. Eller, Director of the Center for Bradbury Studies at IUPUI, told the crowd at the dedication:

Bradbury, who received an Academy Award, two Emmy award and a Pulitzer Prize but never attended college, struggled during his years at Central School, said Jonathan Eller, the director of the Center for Ray Bradbury Studies at Indiana University -Purdue University Indianapolis.

“He was occasionally banished to the hallway outside of his classrooms in Waukegan Central School, where the principal would fix him in her gaze and say, ‘When are you going to learn to keep your mouth shut?’” Eller said.

His “secret source of early learning and his great passion for literature” instead came from the Waukegan Public Library, Eller said.

Sculptor Oxman’s proposal for the Ray Bradbury Memorial Statue was selected in August 2016 from three finalists. The artist also spoke at the ceremony:

Oxman said his work celebrates “a literary icon and a beloved Waukeganite who gifted us his ever expanding universe of imagination, intellect and optimism for our future,”

The statue tells the story of a man “beaming with unbridled imagination, curiosity and surprise,” Oxman said Thursday evening at the dedication. It shows a “seasoned Bradbury” astride a vintage-style rocket ship with his “legs blissfully outstretched to the wind.”

“We see a grown man on the outside yet a curious boy on the in,” Oxman said. “As a writer, Ray loved metaphors, and this rocket is the personification of the scores of novels young Ray devoured at the Waukegan library that propelled him to uncharted worlds.

“The cogs and gears turn, interlock and harmonize, the endless churning of a vibrant and curious mind. Enraptured in the glory of the moment, Bradbury sends to the cosmos with pages fanning in the wind, beckoning us to explore, imagine, write and tell stories yet untold.”

Here is home video of the complete event: 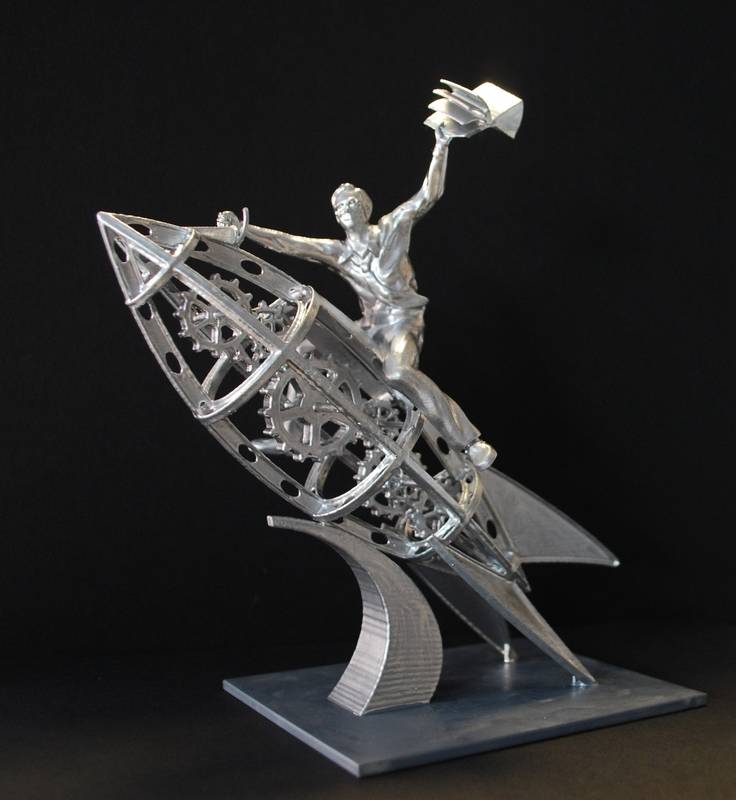