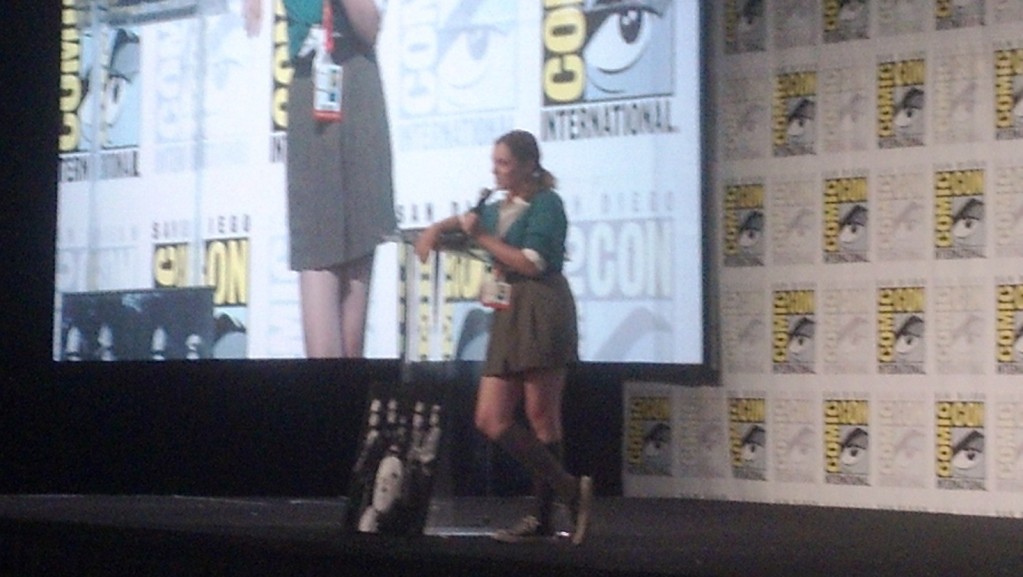 By John King Tarpinian: The Saturday evening tribute to Ray was very beautiful and moving.  The hall sat 4,000 people and followed a Gleek Fest.  I know of a few people who attended the Glee event in order to get a good seat for the tribute.

Even with having a line-up and an outline we had fifteen minutes to set-up and decide how to actually do the panel.   It was decided to take the tables off the stage and have a single podium so each speaker would be able to give their personal tribute to Ray.

Sam Weller was the organizer-host (The Bradbury Chronicles, Listen to the Echoes & Shadow Show).  He shared podium duties with Mark Evanier (Kirby: King of Comics).  Each tribute was separated by video clips of Ray over the decades.

First up was Rachel Bloom who had prepared a PG-13 version of her Hugo-nominated song.  When she came on stage she asked the assembled masses if they wanted to hear the CENSORED version or the real version.  Not one person in the hall opted for the CENSORED version and Rachel added some audience “call & response.”

A number of the people who spoke have known Ray for half a century or more, William F. Nolan, George Clayton Johnson and Stan Freberg.  Both Bill and George let people know how Ray helped those two young writers.  If you youngins’ do not know the name Stan Freberg, just Google “Ray Bradbury Stan Freberg prunes” then sit back and prepare to laugh out loud.  Ray introduced Stan’s wife to him and was best man at their wedding.

Joe Hill gave a lovely tribute, of course.  He mentioned he had only met Ray the one time at the 2010 Comic-Con and that a man came over to him asking if he’d like to say hello to Ray.  I am proud to say that I was “that man.”  Joe also read a moving tribute from Frank Darabont.

Margaret Atwood had never met Ray and was supposed to visit him earlier this week but that was not to be.  She talked about how she read, as a young girl, Ray’s books as they first came out. That she used some of his themes in her books.  In The Handmaid’s Tale she used that women were not allowed to read because of Fahrenheit 451.

Marc Scott Zicree told how he first met Ray.   As a young man, Marc had done a “mixed tape” mashing up various audio renditions of Moby Dick.  Marc handed this out to a few friends.  A copy wound up with Ray.  Marc says he came home one day to find a message from Ray on his answering machine asking him to call.  Marc was afraid he was in trouble when in fact Ray loved the tape and they became fast friends.

On a final personal note, the only times I attended Comic-Con were with Ray.  Not a bad way to visit the zoo.  I did not speak but in talking to the guest speakers backstage I told how Ray’s hearing aids really did not work well with the den of noise in the hall but that hundreds of times an hour you could hear people shout out such phrases as, “OMG it’s Ray Bradbury.”  “I LOVE YOU RAY.”  “THANK YOU Ray.”  But the one that really got to me was when a young father and his son, who was riding on his shoulders said to the son, “There goes Ray Bradbury the greatest writer of all time.”  Once a man came up to Ray, got down on his knees bowed three times, got up and just walked away without saying a word.  There were lots of laughs, hugs and tears backstage and that will be how I will always remember Comic-Con. 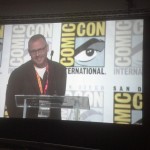 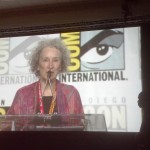 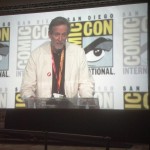 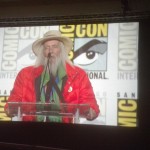 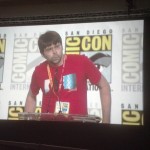 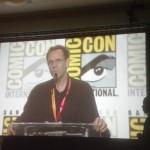 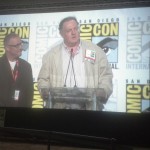 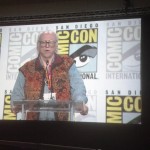 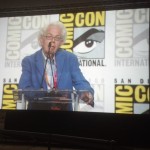 4 thoughts on “Tarpinian: A Comic-Con Tribute to Ray Bradbury”