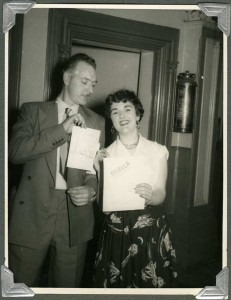 Terry Jeeves with Frances Glynn in 1954. 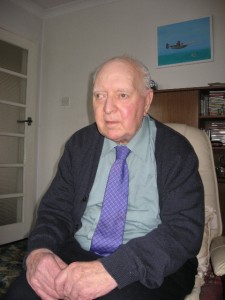 Prolific fan artist Terry Jeeves has passed away. Sheryl Birkhead received the news in an e-mail from Terry’s daughter.

A member of First Fandom and winner of its Hall of Fame Award in 2010, Terry was active as an artist, organizer, faned and fan writer.

His art was popular and respected. He contributed countless humorous line drawings to fanzines and won the Rotsler Award in 2007. “The virtues of Terry’s work,” Taral Wayne once wrote, “is its invariable good humour, and the by and large pleasing nature of its construction.”

In the days when most fanzines were mimeographed, Jeeves was regarded as having few peers for his work on stencil. His “Soggies,” characters he originally created to be both distinctive in appearance and easy to draw, even appeared in a number of professional hobbyist magazines.

He helped found the British Science Fiction Association in 1958, later serving as chair and as editor of its zine, Vector.  He was one of the first fans recognized with the Doc Weir Award for service to British Fandom.

Jeeves published a fanzine of his own, Erg, for over 40 years. He also co-edited Triode with Eric Bentcliffe. He produced a bibliographical Checklist to Astounding SF and was credited for assisting with Michael Ashley’s complete index of the prozine (1981).

His articles appeared in many fanzines. Among his last projects was a memoir of his service with the R.A.F. during World War II, which was serialized in The Knarley Knews.

He even wrote a story that won the N3F short story competition.

By profession Jeeves was a schoolmaster. Married twice, Jeeves lost his second wife, Val, to cancer in August 2008.

[Thanks to Sheryl Birkhead and Robert Lichtman for the story.] 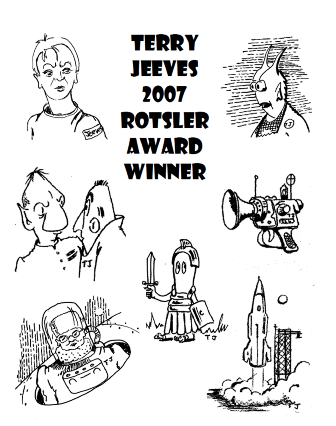 8 thoughts on “Terry Jeeves Passes Away”