By John Hertz:  Being one of the Rotsler Award judges, it was my happy task to call Teddy Harvia (“Hey, Teddy!” – no, wait, that’s a water-softener joke) and tell him he won.

Actually I asked him first whether he’d accept the Award if we gave it to him. We adopted that protocol a few years ago after a Learning Experience.

The Greek poet Hesiod said “Only fools need suffer to learn” (Works and Days line 217). But you already know what kind of fool I am.

Harvia said, more or less (with this equipment I can’t find how to do Jack Speer’s quasi-quotes – which reminds me, Sandra Bond, thanks for all the fish), “Certainly, I’d be honored.” So I said, more or less, “That’s good. You are.”

Then this thank-you note came in the mail. 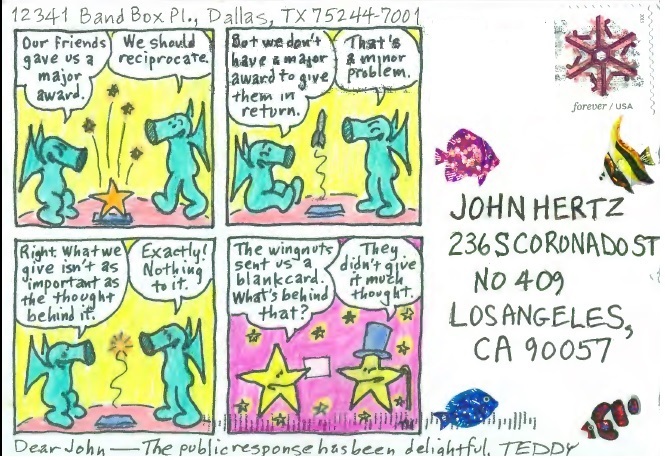 Didn’t I tell you “Keep watching the stars”?

Shakespeare fans, and maybe others, will know that in Shakespeare’s time “nothing” rhymed with “voting”. Much Ado about Nothing, to the Elizabethan-Jacobean ear, rang the chime of taking note (and of music: Act II, sc. iii, “Come, Balthasar, we’ll hear that song again…. Nay, pray thee come, / Or if thou wilt hold longer argument, / Do it in notes.” “Note this before my notes: / There’s not a note of mine that’s worth the noting.” “Why, these are very crotchets [whimsies, quarter-notes] that he speaks! Note notes, forsooth, and nothing!”).

Shakespeare was a punster of almost Japanese dimension – or, for that matter, the 14th Chorp Dimension – but I digress.

Harvia has for a while now been – well – exploring nothing. Some of us saw this in the Lonestarcon III Program Book (71st Worldcon, San Antonio, Texas, 2013). 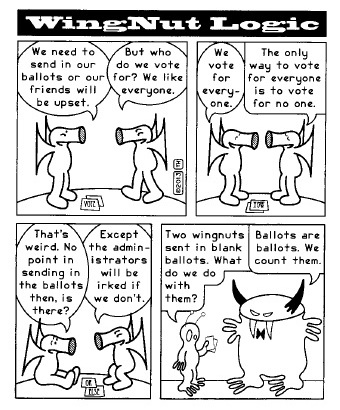 [Editor’s note: I have used Paint to remove as much of the cancellation mark from the postcard art as I could. It may still look spotty.]

4 thoughts on “Thanks, nothing”