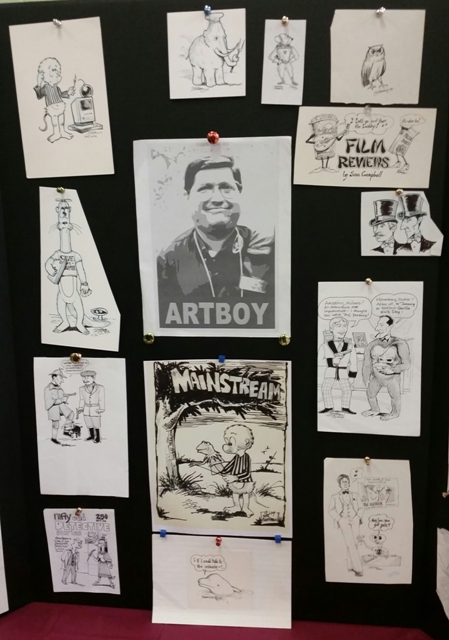 Shiffman art displayed at the memorial on February 15. Photo by Randy Byers.

By John Hertz: Another thing last weekend was a memorial for Stu Shiffman.

Shiffman was one of the best fanartists we’ve had. That’s saying a lot. He won the Rotsler Award in 2010 and a Hugo in 1990. He drew for Chunga, Izzard, Janus, Littlebrook, Mimosa, Rune, Science Fiction Five-Yearly.

In 1981 he was the Trans-Atlantic Fan Fund delegate, attending the British national convention; his nominators were Harry Bell, Mike Glicksohn, Mike Glyer, Jerry Kaufman, Peter Roberts, all names to conjure with.

He was a guest of honor at Corflu, Lunacon, Minicon, Wiscon.

He was a judge of the Sidewise Award.

He married Andi Shechter. They having been among those who made the Great Pilgrimage to Seattle, she conducted a memorial there. By virtue of Shechter & Shiffman’s bicoastality, Laurie Mann conducted a memorial at the same time during Boskone. That’s why I used the singular. Shiffman was singular.

His deft portrayals of our adventures, in which his historical interests and sometimes talking animals took part, placed us in hieroglyphic Egypt, Victorian England, the future imagined by E.R. Burroughs.