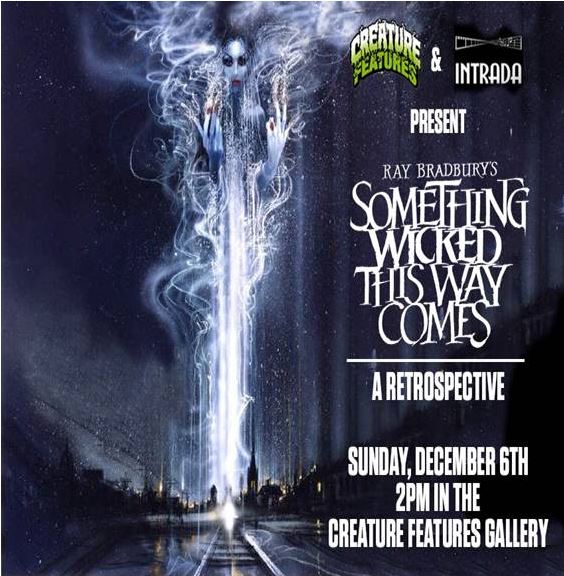 (1) Creature Features and Intrada pay tribute to Disney’s 1983 adaptation of Ray Bradbury’s Something Wicked This Way Comes on December 6, starting at 2:00 p.m.

(2) J.S. Breukelaar praises “Five Ray Bradbury Stories That Tell Us Everything We Need to Know About Writing”

“Kaleidoscope” appears at first to be either a story without a plot, or a plot without a story. A rocket explodes. Five astronauts plunge to their deaths. The end. No survivors washing up on steamy shores in their scanties. No alien rescue. No worm holes. Nothing. But what makes this story explode off the page is the sickening tensions between the Captain and his men, and how death is the sickest joke of all, a “black butcher” slicing off chunks of time, of space, of story.

Through colliding disembodied dialogue and unverifiable histories, Bradbury tangles several lifelines into the short dark knot of this ironically titled story. The men drift apart, betrayals surfacing across the intercom, confessions made and silenced, jealousies erupting in violence. Careening meteors slice off Captain Hollis’s limbs one by one and as each of his men disappear into space, he must face up to the fact that he was even less of a captain in life than in death, even less of a man.

With what’s left of him about to burn up in the earth’s atmosphere, all Hollis wishes for is one good thing he can do “to make up for a terrible and empty life.”Instead of letting this fizz into a cautionary, platitudinous tale about living every day as if it were your last, Bradbury turns it into a fireball.  Sears the soul. The captain must burn, yes, but at the last moment, Bradbury pulls a POV sleight of hand and plots a final twist. Something utterly unexpected and impossible that grabs the reader by the heart and won’t let go. Something wondrous.

Bottom Line: Plot exists in the most unlikely scenarios. A character trapped in stasis, doomed or fallen, unable or unwilling to act beyond a kind of desperate vision or incendiary dialogue, can be the set-up for some pretty twisted plotting (preferably without flashbacks!). Remember: a story doesn’t have to have a plot, but it usually wants one.

(3) Twenty-eight years ago, in December 1987, Playboy magazine published a new story by Ray Bradbury: “The Laurel and Hardy Love Affair.”

The story concerns a couple who meet at a fancy-dress party, dressed as Stan and Ollie. It was one of several Bradbury stories to refer to the comedy duo (who Ray had seen perform live on stage in Dublin while he was working on the film Moby Dick).

You can find the story today in two of Ray’s short story collections: The Toynbee Convector and Bradbury Stories.

(4) Ryan Holiday says he knows “The Real Reason We Need to Stop Trying to Protect Everyone’s Feelings”, at Observer.

The people in these examples are certainly a bit ridiculous—but by no means bad. None of them see themselves as censors, naturally. They were being sensitive, outraged, protective or triggered. And to be fair, most of their complaints and protests stop short of actually saying “This should not be allowed anywhere.”

But that distinction matters less than they think.

Let’s go back to 451, which I found myself re-reading recently. It begins with Guy Montag burning a house that contained books. Why? How did it come to be that firemen burned books instead of putting out fires as they always had?

The firemen have been doing it for so long they have no idea. Most of them have never even read a book. Except one fireman—Captain Beatty—who has been around long enough to remember what life was like before. As Montag begins to doubt his profession—going as far as to hide a book in his house—he is subjected to a speech from Beatty. In it Beatty explains that it wasn’t the government that decided that books were a threat. It was his fellow citizens.

(5) Subterranean Press is bringing out a Joe Hill limited edition broadside of his Bradbury-inspired tale, “By the Silver Water of Lake Champlain.” Only 250 copies. 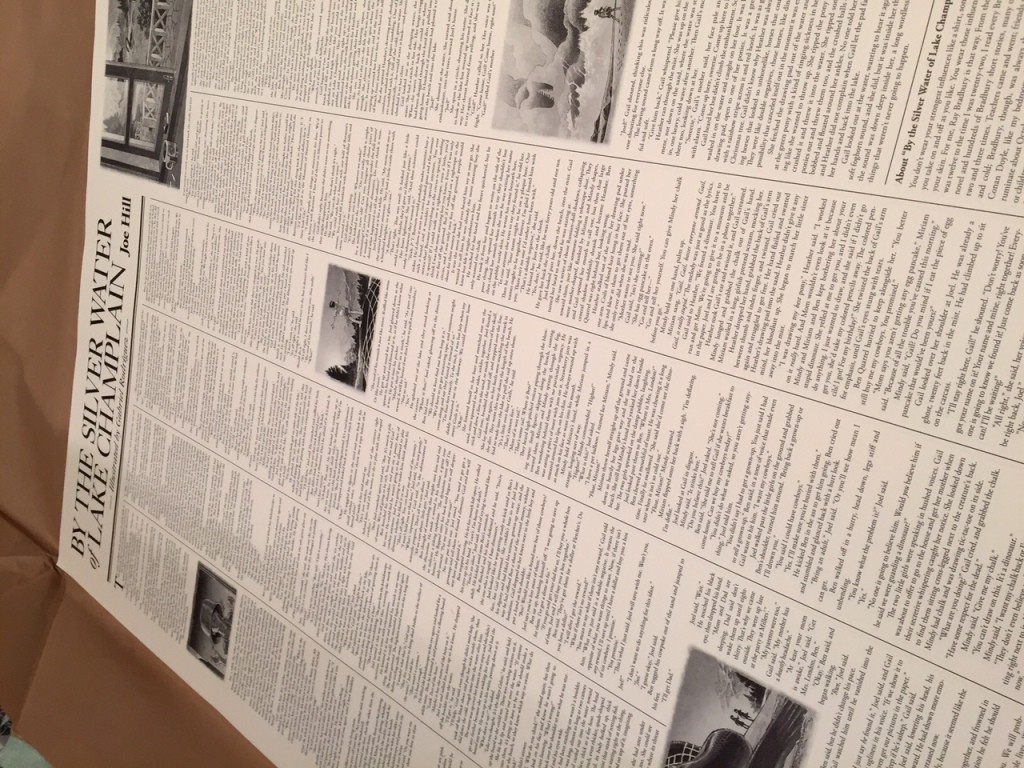 In addition to hand signing each copy, Joe has adorned each with a small doodle near his signature.

This broadside measures 24 x 36, and features a very small print run for a Joe Hill limited edition. We expect it to sell out quickly.

(6) Natasha Shliapnikoff and Rodion Nahapetov want to make a “’Dandelion Wine’ movie based on Ray Bradbury’s iconic novel” and have opened a Kickstarter campaign to start funding the project.

The explanatory video includes a statement by Ray Bradbury (who died in 2012) endorsing Rodion’s efforts.

Ray entrusted Rodion to write the screenplay adaptation of his most personal and semi-biographical novel “Dandelion Wine.”

The two worked closely together, and, after several drafts, Ray gave Rodion’s script his final approval and Rodion gave Ray his solemn promise to produce a film that would never compromise the integrity of his novel. This is a promise we must keep to the great Ray Bradbury, one of the most celebrated writers of our time, who perfected the art of storytelling and left this world so much richer with his contributions to literature.

Unfortunately, the appeal has attracted only 13 backers and raised $637 of its $350,000 goal. It will continue through January 9.

[Thanks to John King Tarpinian and Martin Morse Wooster for these stories.]