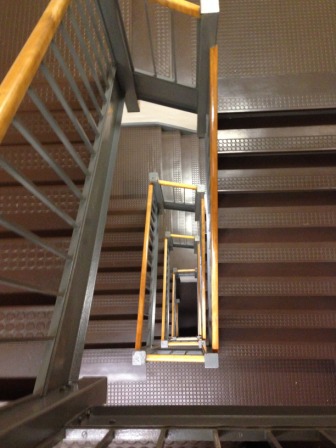 Atop the Stairwell to Space!

By Rich Lynch: Those of you who know me are probably aware of something that I’ve been doing since about the beginning of 2011. During an otherwise uneventful day at work I had misinterpreted a comment by my then-boss that I really needed to get out from behind my desk more often. She had been wanting me to be a bit more interactive with other interagency organizations. But for a few moments I had thought she had meant that I needed to be getting more exercise.

And she would have been right – I was way too deskbound. So I decided to break each day up with a few one-mile walks within the building where I work. This increased my metabolic rate, which has helped me to manage calories and weight, and the endorphins generated by this mild exercise have helped to sharpen my thinking while I’m at work.

But to make things interesting, I plotted a virtual “Walk Across America” to keep track of my total distance walked and to serve as a motivation to keep going even farther. Five years of these one-mile walks have “brought” me more than 3,200 miles, or the distance from my home in Maryland down to New Orleans, across Texas and the desert Southwest to Los Angeles, then up the coast toward San Francisco.

And there’s more – each mile walked includes more than 100 feet of stair climbing. And as of February 3rd, I reached a milestone – my total distance climbed passed the 62-mile mark, the so-called Kármán Line which represents the internationally-recognized boundary between the earth’s atmosphere and space. Years ago at a meeting, someone not-entirely-in-jest accused me of being a space cadet. I can now claim to have officially fulfilled that prophesy!

But, truth be told, I’ve probably been a space cadet for most of my life – I was nine years old, when I discovered science fiction. This was back in the autumn of 1959, and it was before I found out there were science fiction books in the school library – it would be about another year before I would read Arthur C. Clarke’s Islands in the Sky. No, my first exposure to science fiction was on television.

It was a show titled Men Into Space, televised in 1959 and 1960 at the very end of the Eisenhower administration, back when the Space Race with the Soviets was becoming a national priority. It depicted the U.S. Space Program as a part of the Air Force – the main character was Col. Edward McCauley, who was portrayed as being the number one U.S. astronaut. He took part in practically all manned space missions, many of them to the moon. The program was only on the air for one season, but that season was 38 episodes long.

Seeing an episode of Men Into Space was a true sense-of-wonder experience, before I even knew what that meant. In the course of its single season, manned space flight progressed from the building of a space station, to the first test of an orbital flight around the moon, to a moon landing, to a moon base, to a trip to a near-earth asteroid, and ending the series with a trip to the planet Mars! Along the way there were episodes that addressed the question on whether we are alone in the universe. Great stuff to a kid who was about to turn 10 years old! 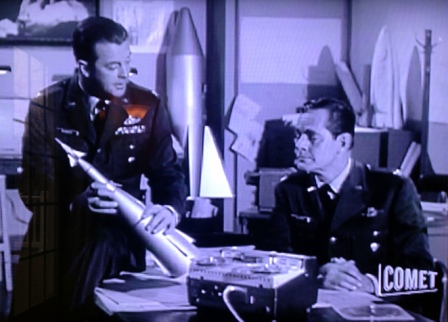 Episodes were only a half-hour long, so the plots were pretty direct: a team of astronauts, headed by McCauley, was sent off into space for some purpose. Something unexpected happens, often imperiling the crew, and McCauley has to quickly find a way to save the day. It all worked because the actor William Lundigan, who played McCauley, was a military man himself, having served in the U.S. Marines during World War Two. On screen he comes across as an in-charge authority figure who is nevertheless very likeable. And it helped that Lundigan believed that all the space science depicted in the series was attainable someday in the real world without the need for any huge leaps in technology. He was reported to have said that: “What helped me to make up my mind [to be in the series] was the fact that this was not some Buck Rogers type show. It was not a science-fiction series, but a science-fact series. You might even say it’s a combination of a public service show and a dramatic series.”

One other thing that has reserved Men Into Space a place in my memory for all these years was how realistic the series seemed to be. And there was a reason for that – visual backdrops and spacecraft designs were created by the famous space artist Chesley Bonestell. There was also extensive technical assistance provided by the U.S. Air Force’s space medicine office, which helped give the series a sense of humanity in amongst all the space technology. 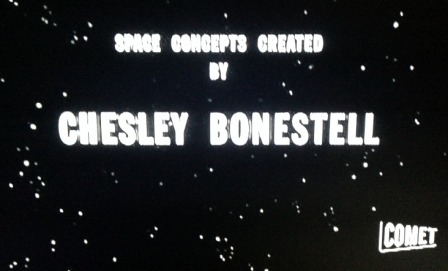 Men Into Space ended its run more than half a century ago but since then I have always remembered how amazing it had seemed to me. So it was a pleasant surprise when I discovered that the new cable television network Comet TV, amongst its offerings of Grade-Z monster movies and 1990s sci?fi, had found room to include it in their schedule. The evening of my ascendency into Space Cadet-hood I watched an episode – it guest-starred a very young-looking Robert Vaughn five years before he became famous as The Man from U.N.C.L.E.  The plot, about a radioactive cloud of gas in a lunar crater, was a bit retro but you know what? It still held together pretty well.

Anyway, I’m pleased that after fifty-seven years I finally got another chance to watch what had been my favorite television show.  And I’m still a fan.

10 thoughts on “The Day I Became a Space Cadet”