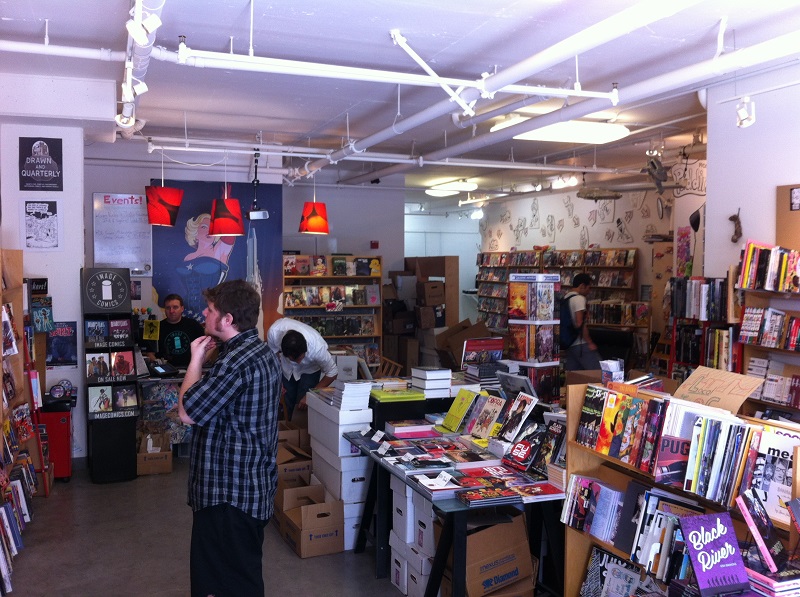 By James Bacon: I love checking out comic shops, seeing what they are like, finding things I never knew existed or perhaps something I never expected to find. This is how I was as I walked into Mission Comics and Art in San Francisco. The shop was welcoming and large, a dogleg in the space meant it stretched back further than I expected, the shelves full of good comics, a couple of sofas ready to encourage spontaneous readers to browse and buy, posters, ephemera and years of comics culture adorned the shop.

As I continued into the shop, it became apparent that there was a gallery right at the back, an open functional space perpendicular to the shop, and then I found what must be one of the most interesting exhibits of my year.

The Degenderettes, a Feminist-Genderqueer Bicycle Club, had an exhibit that not only filled the space, but was a fun and vibrant commentary on gender and society.

There is a denim biker jacket in pride of place on the wall, it looks well soiled,  and it is only as I read that I see it is covered in menstrual blood. This is unusual but also potent stuff. There is no fear here by the artists of their own humanity. A whole wall is covered in brutal looking weapons, made of pieces of bicycle. I look at the razor blades on the end of wires coming from a handle bar, and a chain flail with knotted chain at the end, and a try the knuckle duster that is made from a bicycle cog, it tempts me to steal it, and I wonder should I.

The group have their own perspective and explained it as part of their opening:

After subjective collaborative renegotiation of the contemporary dialogue encapsulating the global cultural narratives of gender politics, we have decided to exhibit a Degenderettes jacket stained with menstrual blood, an array of bicyclist weapons and a birth certificate shredder, in addition to projections, paintings and sculptures by individual members. For the opening we will be smashing an R Mutt urinal with a pink sledgehammer, so bring your protective eyewear if you value those sorts of things.

There are seven weapons on one wall, and then a gun rack holds a dozen or so pink painted Nerf guns. A case holds two Maverick rotary Nerf guns, painted white and pink, along with dozens of mini tampons that fit perfectly into the space for Nerf darts. A mannequin has a pink sash covered in intricately made merit badges, sticking two fingers up at what people may consider gender norms, but which in reflection of this rebelliousness which I interpret as a stand against gender conformity. Also modelled is a bandolier holding tampons.

The Biker Jacket hangs in pride of place, while there is a shredding machine to destroy birth certificates, a selection of tampons for men, art on canvas, a ladies’ toilet door into nowhere,  and the smashed Urinal in many pieces on a dais.

It was fabulous use of the space, but also quite challenging in its concept. Here is art that is speaking loudly and prepared to be genuinely uncomfortable for the viewer. This is rare I feel, there was just something honest about what has been done, and at the same time inspirationally thoughtful and brilliant about the wider perception on our society.

There was also two walls are covered in exceptionally beautiful comic art, simply attached to the wall with small bulldog clips, and although one of the images featured a group of Degenderette biker jacketed characters, I was soon to learn that this is Falling Sky, the work of Degenderette  Dax Tran-Caffee.

Failing Sky is a web comic that contains four interrelated stories: the memoir of a failed sailor, the quest of a travelling ghost, the adventure of a genderqueer nancy drew, and giant robots. According to Dax Tran-Caffee:

I wanted to see in the world – which means not just making art that addressed 21st century feminism, transgender issues, economically viable art careers, etc., but instead I would make something that would intrinsically represent these themes within the real world. In other words, I could have made a series of esoteric oil paintings about how awful rape-culture is, but perhaps it would be better to write a story in a popular medium about human relationships superseding rape-culture.

The artwork is beautifully done, hand drawn with watercolours enhancing the clean style and fine inks, and the structure is fascinating, again best explained by the creator,

Failing Sky is 4 storylines in 30 chapters, with chapters arranged hierarchically by theme instead of sequentially by plotline (not quite like Cortazar’s Hopscotch, but maybe more like if Wikipedia’s articles were narrative). What I’d like is for you to be able to read chapters out of order, selecting which to read solely driven by your own interests, no longer having to suffer through the boring chapters, and where you can stop reading when you feel your own sense of completion, not just because I’ve declared that you’ve reached the final page. I recommend that readers start at “The Sinking Ship,” but wherever you go from there is up to you.

I made my way into Mission Comics a second time.  Leef Smith the owner was exceptionally nice and it was indicative of this comic shop that Joe Keatinge writer on Image’s Shutter was relaxing in a sofa, signing stock as he had passed by. I again was drawn to the back room, and found the artwork utterly fascinating, and inwardly bemoaned that it would not see a wider audience, here in a comic shop, a venue that I love, I was transfixed by the interactiveness and freedom of artistic expression that was telling a story of people, real art and real meaning.

This article appeared in other online outlets.

Dax Tran-Caffee kindly supplied us with the names of those who created the artwork and:

The show was made possible by the support of Alanna Simone and of course Leef Smith at Mission Comics and I have to admit, it felt fantastic. There was an energy and connectivity about this show and a sense of reality that made it really connect, and I am sorry it was ending. 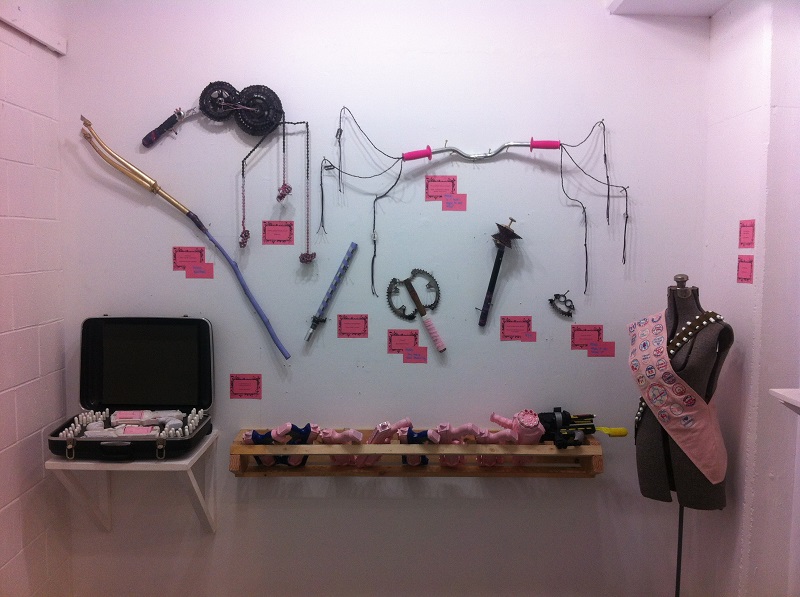 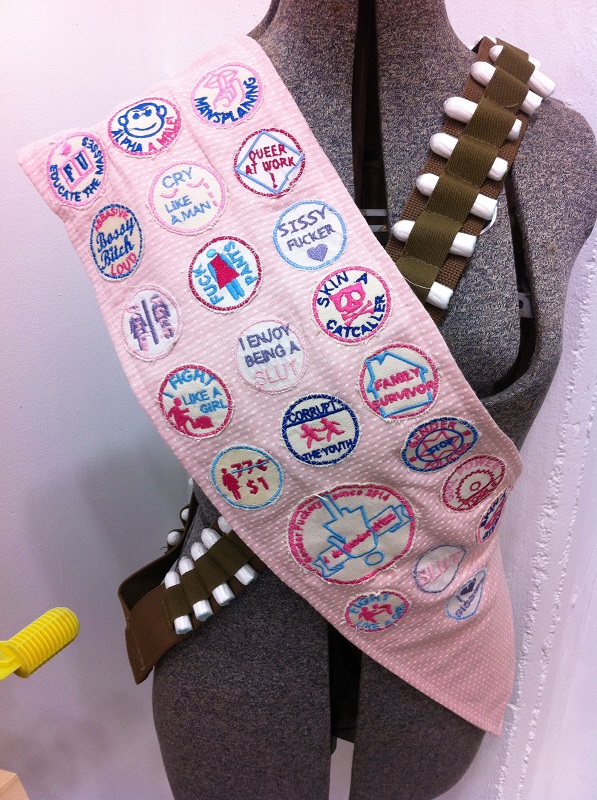 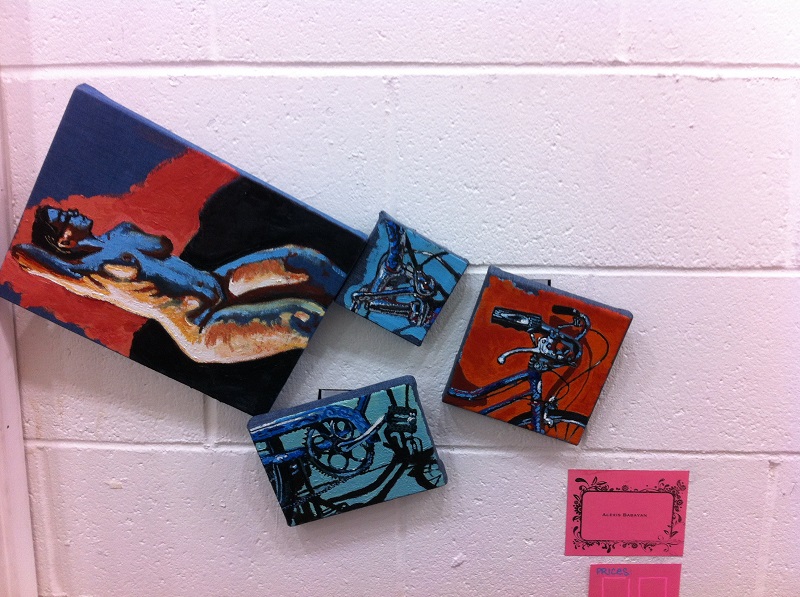 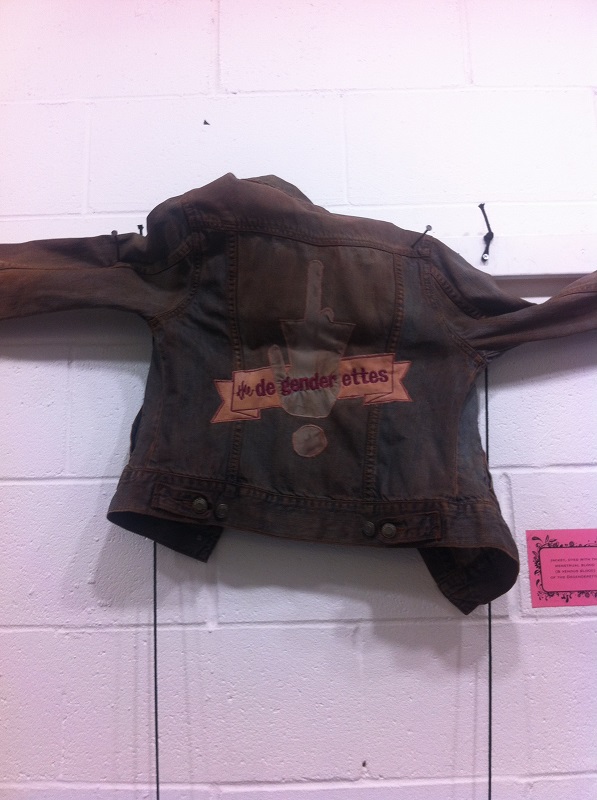 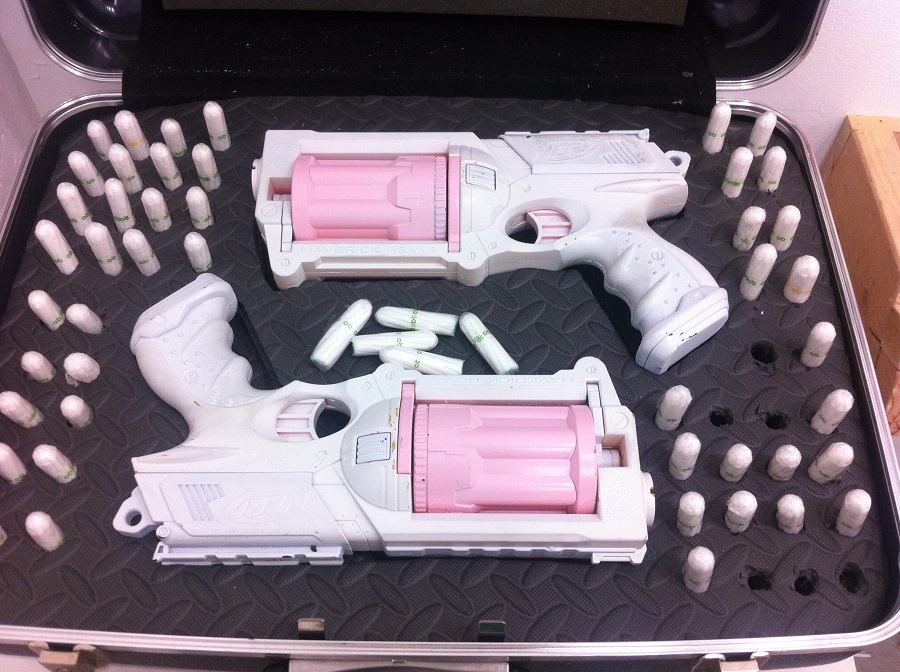 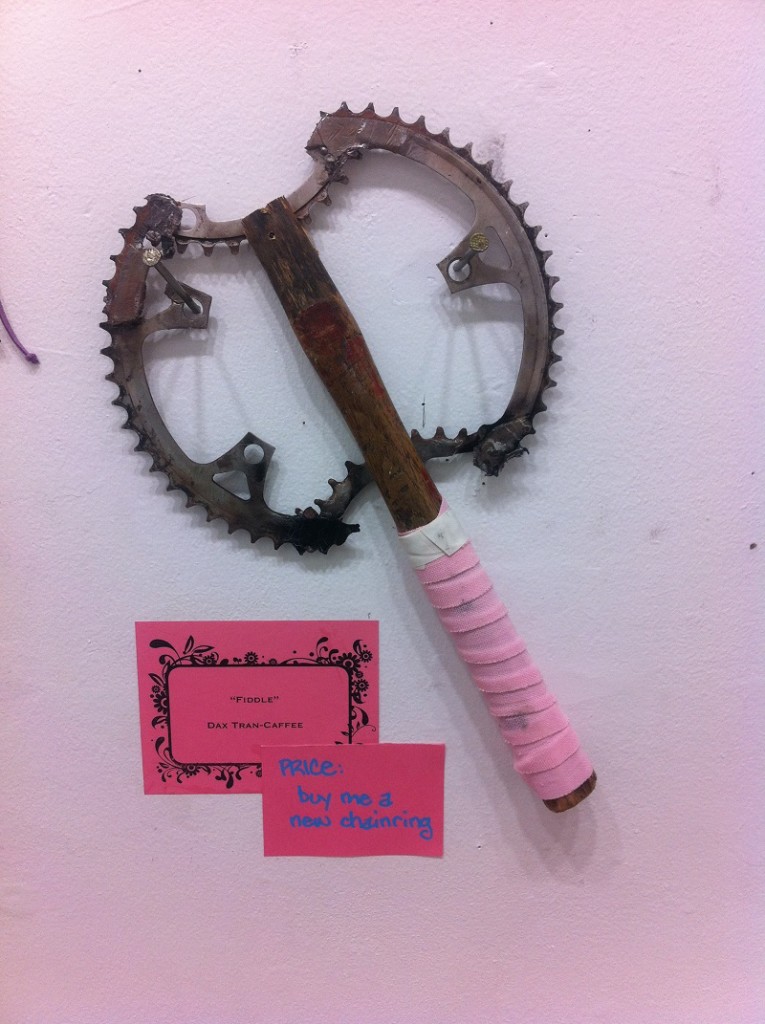 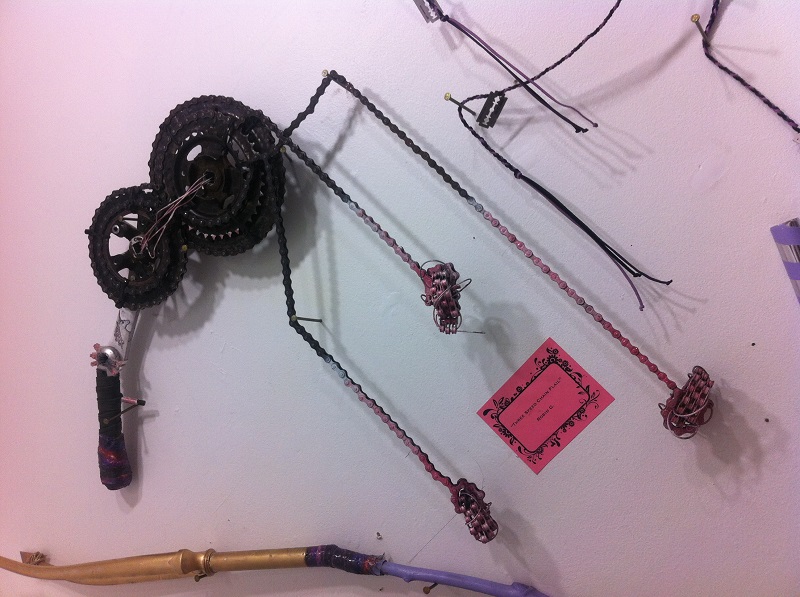 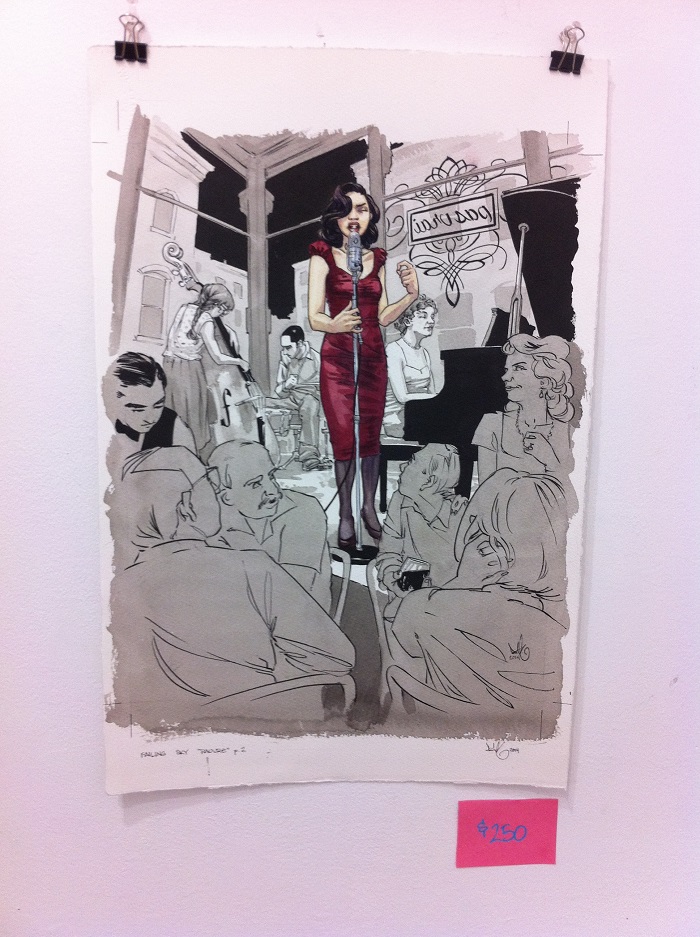 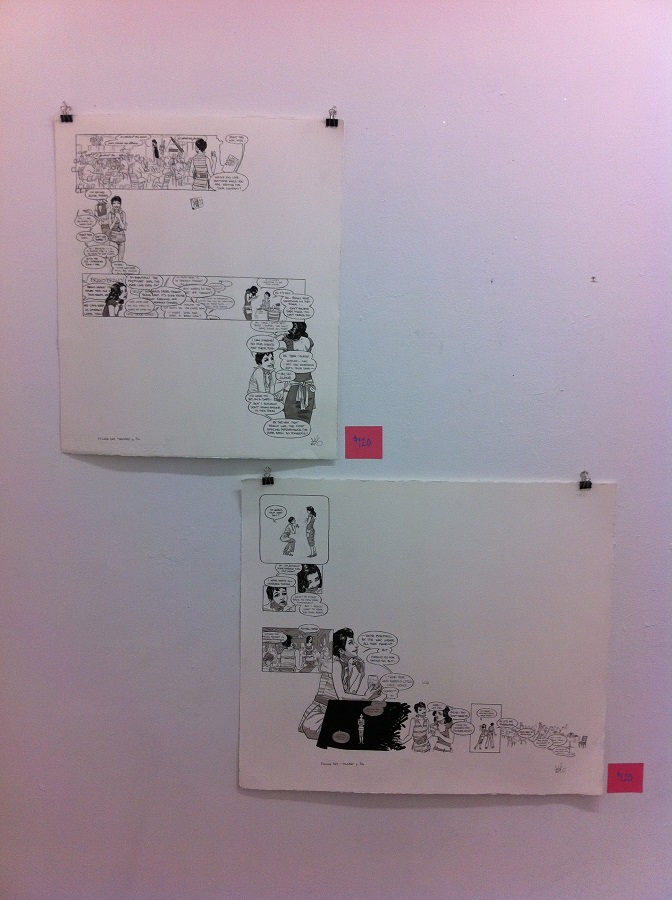