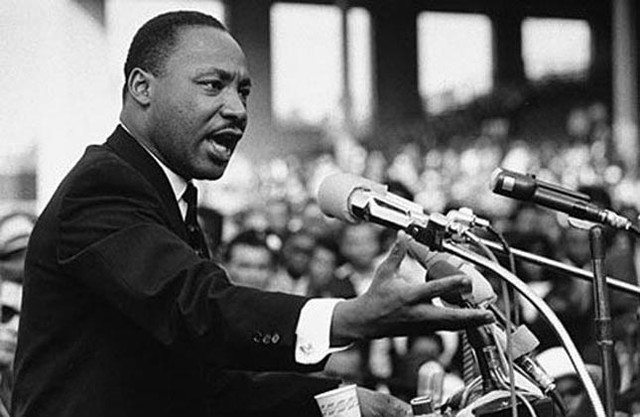 By Will R.  Dr. Martin Luther King Jr. isn’t often the first name that comes to mind when we think “science fiction,” but perhaps that’s changing.

It’s hardly necessary at this point to remind ourselves that King has at least one well-known literal connection to science fiction. The story of how he personally shaped Star Trek, certainly among the most influential works of the genre, for instance, has been relayed in these very files:

If not for Dr. Martin Luther King, Nichelle Nichols would have abandoned Star Trek and the role of Uhura. Her reminiscence about their encounter is quoted on Dangerous Minds:

“Yes, Ms. Nichols, I am that fan. I am your best fan, your greatest fan, and my family are your greatest fans…. We admire you greatly ….And the manner in which you’ve created this role has dignity….”

I said “Dr. King, thank you so much. I really am going to miss my co-stars.” He said, dead serious, “What are you talking about?” I said, “I’m leaving Star Trek,” He said, “You cannot. You cannot!”

I was taken aback. He said, “Don’t you understand what this man has achieved? For the first time on television we will be seen as we should be seen every day – as intelligent, quality, beautiful people who can sing, dance, but who can also go into space, who can be lawyers, who can be teachers, who can be professors, and yet you don’t see it on television – until now….”

But it’s striking that the connection between King and scifi increasingly seems to be assumed. The occasion for this post, for instance, was happening upon the following unusual comments from a small town on the high plains of New Mexico:

Graham, who attended King’s alma mater, Morehouse College in Atlanta, Georgia, said he thinks about stories such as King convincing Star Trek’s Nichelle Nichols to stay on the show for more seasons, because it is important that there is diversity. He said he heard this story on National Public Radio.

Graham said science fiction is a representation of the future of a society, so it is important to civil rights that diversity and acceptance is shown there.

“Science fiction foreshadows our future as a species and talks about current issues,” said Graham, who is helping to organize the city-wide celebration for Martin Luther King Jr. Day on Monday.

Eastern New Mexico, for those who haven’t been there, is a place that’s mainly ranches and open range, a place you wouldn’t usually think of “sci-fi country” (though Roswell isn’t all that far away). Certainly it’s one anecdotal bit of evidence. But lest that seem like an outlier, consider this lead, from an article headlined “Keep King’s dream alive, don’t perpetuate racism and intolerance” that appeared recently in The Dialog, “Serving the Catholic Community of Delaware and Maryland’s Eastern Shore”:

“All of this has happened before, and all of this will happen again.”

That’s a prophecy from a science fiction show called “Battlestar Galactica,” but sometimes I think it might be a prophecy for our world, as well.

The articles prompt thoughts about MLK, how he saw the other country embedded within our own as he sat in jail cells, caught between communities, and about how much of King’s thought is concerned with galactic scale and scope. He’s famously associated with the phrase “the arc of the moral universe is long,” for instance (which he apparently didn’t invent – but it’s a hallmark of great speakers, isn’t it, that they make phrases their own?)

If any genre of fiction can attest to that scope, give it some form the mind can work with, it must be science fiction.

Perhaps it’s on my mind because I just finished reading Michael Chabon’s Telegraph Avenue. I wasn’t surprised to find it laced with science fiction and superhero references given Chabon’s background with Kavalier & Clay and The Yiddish Policemen’s Union, but I was surprised by how much of the book turned out to be about Afrofuturism. Though the book itself was hardly his most successful, the passages dealing with the experience of African-Americans and why science fiction might be a natural analogy are among the book’s best elements. Consider:

Gwen recalled a lecture of Julie’s, delivered one night when he was ten or eleven, on the difference between terraforming and pantropy. When you changed a planet’s atmosphere and environment to suit the needs of human physiology, that was terraforming; pantropy meant the alteration of the human form and mind to allow survival, even prosperity, on a harsh, unforgiving world. In the struggle to thrive and flourish on the planet of America, some black people had opted for the epic tragedy, grand and bitter, of terraforming; others, like Gwen’s parents and their parents and grandparents before them, had engaged in a long and selective program of pantropy.*

Scifi puts the choices into their starkest form.

The past may be another country, but, as we are reminded by the television revival of Philip K. Dick’s The Man in the High Castle, it can be awfully hard to tell the difference when you’re there. Maybe it’s only the outcasts who glimpse the truth. And so today, let’s spare a thought for King the alien, whose dream of beings who can coexist despite differences still too often looks like fantasy.

/* Who hasn’t given a lecture like this at the age of ten or eleven?

15 thoughts on “The Dreams That Connect MLK and SF”