aka It is a truth universally acknowledged, that a sad puppy in possession of a published story must be in want of a Hugo

[How many GamerGaters were involved during the Hugo nominating phase? Vox Day says people overestimated in today’s comments.]

The GamerGate involvement in RP/SP through the nomination period is limited to two individuals, me and Daddy Warpig. We are both original GG (GG before Baldwin) and we are both Rabid Puppies.

There are a few GGers who have gotten involved post-nomination, but I don’t know how many. The RP are basically the Vile Faceless Minions plus a few Dread Ilk.

You may wish to note that there are more Vile Faceless Minions (366) than Rabid Puppy nominating votes. That’s because the extent of the Rabid Puppies campaign was a single blog post. Every Rabid Puppy is a VP reader. We didn’t need GG and we knew it, as you can confirm from our pre-shortlist discussions. There are some GGers buying supporting memberships. How many, I do not know.

Among the revelations in the “Return of Kings” blog post about how women in publishing are keeping true men writers down:

If you are a first-time writer and the acquiring editor decides that you’re an asshole — literally, if she is given reason to believe you’re an asshole who will be a pain to work with — she will likely make the decision to not buy your book.

This is represented as part of the shameful status quo that is keeping men down….

The other option is, of course, to not be an asshole, and is left unconsidered.

In this thread we will hammer out the formal language of the proposal, any FAQs we wish to include, and strategize for the presentation at the business meeting itself. At this point, we’ll consider the system itself locked in, so we are really only looking at the language.

There is one more issue that is still up for debate: Should we explicitly empower the Hugo admins to use further tie breakers in the future if they decide it’s necessary? I’ve written the proposal and FAQ explanations assuming that we do, however, a case can be made for not worrying about giving them the power explicitly. We should settle that question here. I think that the way I’ve written the “empowerment” makes it okay to include it, but for myself, I don’t feel a strong need to. I’m definitely not opposed to it, however.

….19. Wasn’t this system just designed by Social Justice Warriors to block the Good Stuff? It is true that much of the discussion for this system occurred on Teresa and Patrick Nielsen Hayden’s “Making Light” discussion board, and it is also true that groups such as the Sad Puppies and the Rabid Puppies consider TNH and PNH to be The Enemy, and therefore completely biased and not to be trusted. Other than serving as occasional moderators, TNH and PNH had no real input in the discussions of the system, however. Those of us who worked on the system were very clear that our goal was not to keep the Sad/Rabid Puppies off of the Hugo ballot, and that any system which specifically targets any type of work is inherently wrong and unfair. One of the members of the group is a retired US Naval officer, a combat veteran, a certified Navy marksman, a Christian, and considers Robert Heinlein to be the greatest science fiction author who has ever lived. In short, he is exactly the Puppies’ demographic. But any slate, of any sort, be it a Sad Puppy or a Happy Kitten of Social Justice, breaks the Hugo Award because a small percentage of voters can effectively prevent any other work from appearing on the final ballot. This is a major flaw in the Hugo nomination system, and it is a flaw that must be fixed if the integrity of the award is to be maintained. Politics should play no role whatsoever in whether a work is Hugo-worthy or not.

Final update on the gofundme:

Fully funded, and beyond!

I’m truly in awe of the generosity this community has shown, both to me personally and to the cause of voting reform. Not only has the main campaign received $1440, beyond the goal of $1400; but I’ve also been offered a Sasquan attending membership, so in effect it’s actually $250 over the goal.

Ian Mond on The Hysterical Hamster

“Who Should Win The Hugo Award For Best Novel” – May 27

The Anderson in particular led me to question this whole notion purported by the Sad / Rabid Puppies that good SF has big ideas and entertains.  Having read two examples of this sort of SF, both the KJA and Charles Gannon’s awful Nebula nominee, Trial by Fire (review forthcoming) I can only conclude that my idea of entertainment and big, high concept ideas lives in a very different Universe than what the Sad Puppies are aiming to promote.  This isn’t snobbishness***** on my part, I just struggle to see the appeal of novels that are so poorly written.

But let’s get back to the point of this blog post:

Who Do I Want To See Win – I tossed and turned about this, but I’ve finally landed with The Goblin Emperor by Katherine Addison (Sarah Monette)

Who Do I Think Will Win – I might not have been so keen on the novel, but I believe that Ann Leckie will take home her second novel Hugo for Ancillary Sword.

“Review: The Goblin Emperor by Katherine Addison” – May 26

It’s an interesting slice of life, and I found myself caring about some of the characters. But for me, it wasn’t a compelling STORY.

This is the first pure fun I’ve had reading Hugo nominees this year, barring The Goblin Emperor, which I read prior to the announcement of the ballot.

Joe Sherry on Adventures In Reading

“Thoughts on the Hugo Award Nominees: Professional Artist” – May 26

There is a lot of quality art being produced by the 2015 nominees. Julie Dillon, last year’s winner for Professional Artist, continued to produce excellent work. Based on their work included in the Hugo Voter’s Packet, Greenwood, Pollack, and DouPonce have also produced good work. As a point of personal preference, Greenwood is my top choice here, but it was very close between Dillon and Greenwood. While referencing the Voter’s Packet is a touch unfair because unless you’re also a voter, you can’t see that work. Unfortunately, except for Dillon, none of the other nominees have work posted at the Hugo Eligible Artists tumblr (a great reference for both fan and pro work, by the way), but you should be able to browse the various websites I’ve linked above to get a feel for their work.

Above, I’ve dwelled on the flaws of the comics discussed a lot, and I would like to mention that I really did enjoy two of them and found things to enjoy in the third. They have flaws but they’re not disastrous ones. As the incompleteness problem is apparently par for the course for this category, I’ve decided to ignore this and give all works the benefit of the doubt on that score as far as award-worthiness is concerned. I have decided to vote all four above No Award for the Hugos, in, as it happens, the exact same order as I read and discussed them. My preliminary vote for the category, then, is

…. Everything about it looks copied from other comics. That includes the writing, which is based on just a small number of stale, sexist jokes and pop culture references that need to be retired. Who in their right minds nominated this?

Not in the review: giving sad/rabid puppies a "fair" hearing has the same effect as just no-awarding them sight unseen.

“Transhuman and Subhuman Part VI: Swordplay in Space” – May 26

“Why is the preferred weapon of the Galactic Empire the sword?” John C. Wright tackles that question in the sixth part of his essay collection Transhuman and Subhuman.

Following the premise that a man’s attitude toward war and death reveals his outlook on life, Wright examines a selection of great science fiction books for the answer to why authors attempting to imagine the future so often employ archaic conventions.

I really liked the Lego Movie. I believe it has a lot more content to it than first glance would give it. It is interesting and has a good emotional punch as well as a significant number of fun moments.

On the way to Kansas City for ConQuest 46, I had to drive through Hugo, Oklahoma, so I stopped and took a selfie of me with the city sign, in celebration of my …two Hugo nominations.

Now, I know right now, some of you are thinking, “Hah! That’s as close to a Hugo as you will ever get, Antonelli!” 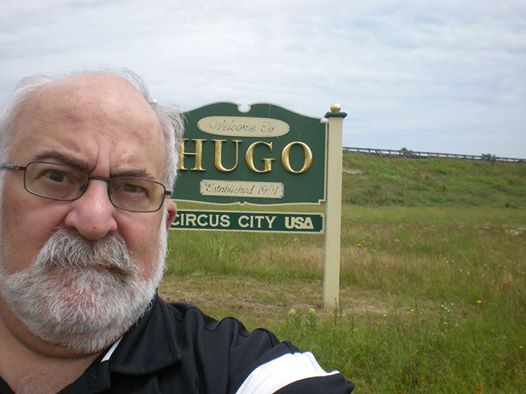 And because Public Enemy is always appropriate:

He book-reviewed, he S.J.W’d
Vile minions viewed his anti-Puppy feud
One-star the rating, listen to him double trouble
He signs in now he’s pushing for the lower level
Like crashing cars he’s out there stealing stars
From books he took without a single look.
Taking a toll ’cause his soul broke with the poll
From the revelation… of a Puppy Nation.
Now this is what I mean an anti-Puppy machine
If Hugo come out at all, he won’t come out clean
But look around here go the sound of the wrecking clown
Boom and pound when he put ’em down