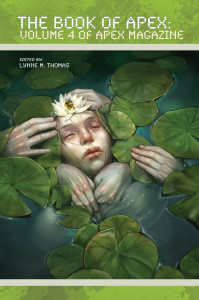 Just out is The Book of Apex: Volume 4 of Apex Magazine, collecting the original fiction from Hugo-winning editor Lynne M. Thomas’s first fifteen issues at the helm of Apex Magazine, a reign that included two Hugo Award nominations for Best Semiprozine.

“The Bread We Eat in Dreams” by Catherynne M. Valente
“The Leavings of the Wolf” by Elizabeth Bear
“The 24 Hour Brother” by Christopher Barzak
“Faithful City” by Michael Pevzner
“So Glad We Had This Time Together” by Cat Rambo
“Sweetheart Showdown” by Sarah Dalton
“Bear in Contradicting Landscape” by David J. Schwartz
“My Body Her Canvas” by A.C. Wise
“A Member of the Wedding of Heaven and Hell” by Richard Bowes
“Copper, Iron, Blood and Love” by Mari Ness
“The Second Card of the Major Arcana” by Thoraiya Dyer
“Love is a Parasite Meme” by Lavie Tidhar
“Decomposition” by Rachel Swirsky
“Tomorrow’s Dictator” by Rahul Kanakia
“Winter Scheming” by Brit Mandelo
“In the Dark” by Ian Nichols
“The Silk Merchant” by Ken Liu
“Ironheart” by Alec Austin
“Coyote Gets His Own Back” by Sarah Monette
“Waiting for Beauty” by Marie Brennan
“Murdered Sleep” by Kat Howard
“Armless Maidens of the American West” by Genevieve Valentine
“Sexagesimal” by Katharine E.K. Duckett
“During the Pause” by Adam-Troy Castro
“Weaving Dreams” by Mary Robinette Kowal
“Always the Same. Till it is Not” by Cecil Castellucci
“Sprig” by Alex Bledsoe
“Splinter” by Shira Lipkin
“Erzulie Dantor” by Tim Susman
“Labyrinth” by Mari Ness
“Blood from Stone” by Alethea Kontis
“Trixie and the Pandas of Dread” by Eugie Foster
“The Performance Artist” by Lettie Prell