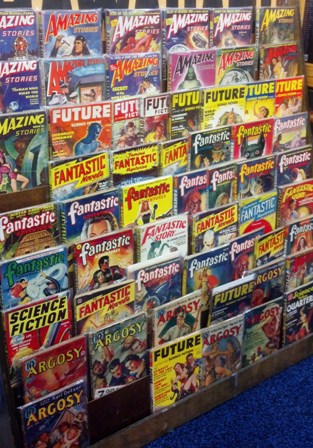 In early 1923, perhaps in an effort to boost circulation of Science and Invention or to test the waters in the growing market for specialized fiction magazines, Gernsback began publishing more stories and fiction that was meant to entertain including works by H. G. Wells, George Allan England, and Ray Cummings. Later that same year, Gernsback released a “Scientific Fiction Number” of his science magazine. The August 1923 issue of Science and Invention featured six “scientifiction” stories. It would not be long before Hugo Gernsback would found the first science-fiction magazine, Amazing Stories.

Within months, the new specialty magazine was selling over 100,000 copies of each issue. In establishing the first specialized science-fiction magazine, Gernsback had tapped a vein of wonder, shared by lonely individuals prone to “imaginative flights of fancy.”

The Sense of Wonder (Stories)

Soon after losing his small publishing empire to bankruptcy, Hugo Gernsback was back in the publishing business. Within months, he had returned to the stands with a pair of science-fiction magazines–Science Wonder Stories and Air Wonder Stories.

The brainchild of Harry Bates, editor of Clayton’s Wide World Adventures, the new magazine was meant to entertain rather than educate. “Astounding. As a name it lacked dignity, but no matter: it was gutsy and would compel attention, and it generally resembled Amazing and could be counted on to attract the eye of that magazine’s readers while pleasantly promising others that the stories would stun them.”

Like Hugo Gernsback had done before it, the demise of Astounding Stories was shortlived. Sold to Street & Smith, the powerhouse publisher of The Shadow, Wild West Weekly, Love Story Magazine, and other pulps, the magazine was back on the racks in September 1933. The new Astounding Stories was edited by F. Orlin Tremaine who seemed to have great faith in the future of science fiction.

Although the outpouring of exceptional fiction continued in the new year with stories such as Simak’s “Cosmic Engineers” and Williamson’s “One Against the Legion,” it is the July 1939 issue that is cited most often as the start of the Golden Age of Astounding and in turn, of science fiction. Behind a very effective cover by artist Graves Gladney, the reader would find the first prose fiction by A. E. van Vogt as well as Isaac Asimov’s first story for Campbell’s magazine.

For the rest of Chomko’s series about early fantasy magazines, click on Pulpfest’s history link and keep scrolling down.