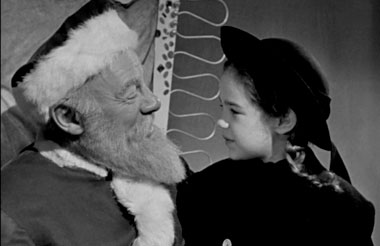 By James H. Burns: When I was walking in Brooklyn, Wednesday night, I kept expecting to see a werewolf wearing a Santa hat, popping out of the fog.

This morning, waking unexpectedly at five A.M., I went outside. The fog was so thick I couldn’t see beyond more than one hundred feet, along the street. I looked above, to the night sky, as I always do, on the 25th, to see if I could catch a glimpse of Saint Nick, and his reindeer.

It’s not supposed to be foggy in New York, at Christmas.

This is, of course, the season of wonder.

It’s also the season for a sense of wonder.

My family was primarily Jewish, but my Mom saw no reason why her kids shouldn’t share in the fun of Christmas (or, if you will, the American part of the festivities)!

We’d get our main seasonal holiday presents on Chanukah, and on Christmas we’d hang stockings.

In the morning, they’d be filled with all sorts of wonderfully wrapped, charming little gifts, items my mother had acquired all through the year: knick-knacks and fun stuff —

What my landsmen would know could be called chachkas (or tchotchkes; literally, Yiddish for small gifts)!

There were many genre-related toys:  In the 1960s, I can remember a Man From U.N.C.L.E. print putty set; Green Hornet playing cards; a bendy Goofy….(There can be no predicting what capture’s a child’s fascination:  My favorite of all these may have been a tiny, plastic white reindeer!)

Most pleasant was the thrill of waiting for, and knowing that Santa Claus would be visiting the house!

My parents were creative.  When I was first cognizant of such times, we had a Christmas with absolutely no snow.  I asked my folks how Santa could possibly get around, in the rain. My Mom and Dad said that Santa had a special set of wheels he put on his sleigh for such occasions (working in tandem, no doubt, with the reindeer)!

I’m always amazed when people say that they don’t like fantasy or science fiction, since so many of us were raised with amazing chronicles of many enchanted folk.  I wonder if the shock of discovering more about those childhood figures is what turns some people away from stories of the imagination.

It can be overwhelming, of course, to discover the true geography of Eden.

The gal I spent most of the second half of the 1980s with didn’t think she was particularly a fantasy fan, until I pointed out to her that one of her favorite shows from her childhood was Rudolph The Red Nosed Reindeer, the stop-motion animation classic from Arthur Rankin, Jr. and Jules Bass.

(If you grew up at a certain period, you were already familiar with their work, from their now long forgotten syndicated television series, The New Adventures of Pinocchio.)

There have been many marvelous modern “fairy tales” in our media, during these weeks of celebration,

Some years ago, I was walking along 34th Street in Manhattan late one December evening when I was suddenly greeted by Macy’s magical Christmas display windows. Each annum, the store will create a sensational spectacle, often involving miniatures and animated figures and the like.

That edition was devoted to the movie, Miracle On 34th Street, based on Valentine Davies’ story, with several scenes lovingly recreated in animatronic-type splendor.

And tears came to my eyes.  Because there was my favorite sequence in the movie, the one that many will have recognized from our title image here, when a foreign-speaking little girl goes to see Santa in the department store. Her mother explains that she has been lonely in this new land.

Suddenly, Kris Kringle is speaking to her in her native tongue.

(In one of  the remakes, with some equal magic, the girl is deaf, and Kris begins talking with her, in sign language.)

Is not one of the dreams of this season, the hope for better understanding?

I sometimes remember Captain Kirk’s lines in Star Trek’s “The City on the Edge of Forever,” the episode  in which he and Mister Spock travel back in time to 1930s Manhattan. When walking in New York with his new love, Edith Keeler, Kirk points to the heavens, and says:  “‘Let me help.’ A hundred years or so from now, I believe, a famous novelist will write a classic using that theme. He’ll recommend those three words even over I love you.”

That same gal from the 1980s asked me if I agreed with the sentiment. I told her that I thought the greatest human quality was compassion, because if one truly had compassion, acts of evil would be impossible…  And it is compassion, I believe, that can enable our acts of kindness.

The only way to repay many of childhood’s specific delights, of course, is to make kids happy in your own life. I’m not fortunate enough to have my own children, but I did have much older siblings:  As a very young man, I was able to discover the very special joy of being a great uncle, or later, a “neat neighbor guy”.

How can one not believe in a god in the universe, when you see a baby smile?

I went to midnight mass with a friend, last night.  I’ll go to many different religious services. It’s not my being a theological experimenter, or speculator, or a tourist of expectation:

I love being among folks of a good spirit, and what can be the palpable sense of an approach to the divine.  (I will close my eyes, as I also often do when body surfing, and pray with the prayers that live in my heart.)

In another era, I almost had children who would have been half-Catholic…

(There was, in fact, a lovely coincidence, yesterday. Sitting two rows in front of me was a woman I only recently re-encountered on the internet, sitting with her lovely family, who had been one of the great lifeguards at the summer day camp I attended as a kid, and who in fact was one of the people who helped make me a better swimmer!)

Devotees of the fantastic have always known the faith it can take to believe in the world of tomorrow.

(“Why Can’t Every Day Be Christmas?” is a sentiment of note featured in an otherwise unremarkable 1960s childrens film, The Christmas That Almost Wasn’t,  whose only other distinction was its starring two kids-tv show hosts, Paul Tripp (of NBC’s Birthday House, and an earlier generation’s Mr. I-Magination, on CBS), and Sonny Fox (of New York’s local Wonderama), and the oddity of being directed by and starring Rossano Brazzi.)

Perhaps one day, the stars will align.

Ultimately, maybe we all have to be our own private Santa Clauses.

It can be truly wondrous, after all to strive for, and embrace, the shinning lights of all our better natures!

6 thoughts on “The Geography of Eden”