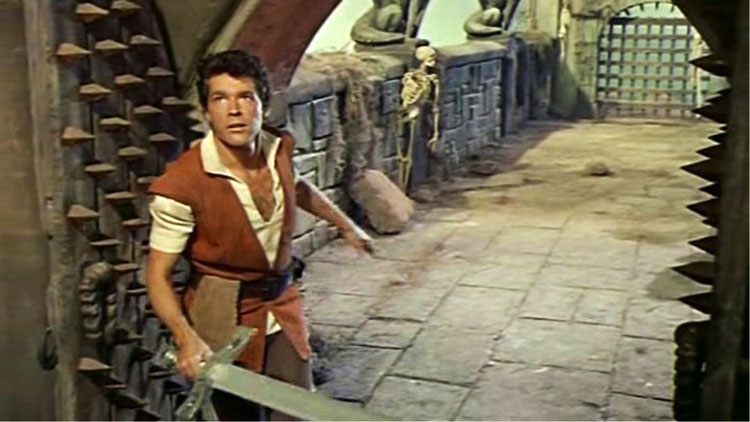 By James H. Burns: TCM ran a Kerwin Matthews film festival yesterday, which reminds me of a story…

Matthews, of course, was the star of two Ray Harryhausen fantasy movies,The Seventh Voyage of Sinbad and Gulliver’s Travels, as well as the similarly-themed Jack the Giant Killer (the latter, one of my all-time favorite fantasy films, in fact!).

Matthews was a classic leading man, who had the unusual ability — still too easily overlooked when contemplating actors — to be believable in the wildest of celluloid special effects situations.

Such an ability not to be overwhelmed by one’s surroundings, or to play down to them, suggests that Matthews could have done on film, just about anything.

(There has been suggestion, in fact, that he was a front runner to play The Saint in the early 1960s TV series, but that has always seemed a bit odd, since the show was ultimately at least partially the doing of its ultimate star, Roger Moore…)

Matthews starred in films for Hammer Studios (Maniac, Pirates of Blood River) as well as the genre entries, Battle Beneath the Earth, Octaman, The Boy Who Cried Werewolf, and two OSS-117 films (a James Bond-type series).

(His Wikipedia bio says he was also in a 1954 episode of Space Patrol, “The Escape of Mr. Proteus”!)

There were more mainstream appearances, in such outings as The Devil at Four O’Clock, with Spencer Tracy and Frank Sinatra, and The Waltz King, a two-parter on Walt Disney’s Wonderful World of Color, in which he portrayed Johann Strauss Jr.

But by the late 1970s, Matthews retired from acting. I think it was the late Steve Swires, a leading fantasy and science fiction movie historian and journalist who first told me, sometime in the 1980s, that Matthews rather successfully operated an antiques shop in San Francisco.  In 1987, my girlfriend and i were going to be visiting the city, and it occurred to me, to say hello…

Not for myself, but for my three-and-a-half year old niece.

I had taken to showing her portions of Jack the Giant Killer, many of the enchanted scenes — none of the scary ones! — and she had come to adore it.

The movie was also a favorite of my Dad’s, her grandfather.

I thought she might find it neat, to have a photo of two of her favorite people (me, and my gal!), along with Jack, of Cornwall… My girlfriend, who had pretty good instincts with children, thought it might actually frighten her…

I have a shy streak, or at least a respectful one, and don’t like to bother folks unnecessarily. Our trip to San Francisco was jam-packed, and we didn’t plan to go to Matthews’ shop.

My only regret is that while it certainly would have been nice to chat, it would have been good to know, for sure, that the actor knew how much his work had meant to so many people. He lived until 2007, to the age of 81, survived by his partner of 46 years, Tom Nicholl.

Surely, much fan mail must have made its way to his store. Matthews, after all, was indeed iconic, if not always mentioned as such. For so many generations, his heroes will always be poised against the unknown, their wit as sure a weapon, as the sword within his hand.

4 thoughts on “The Man From Land’s End”