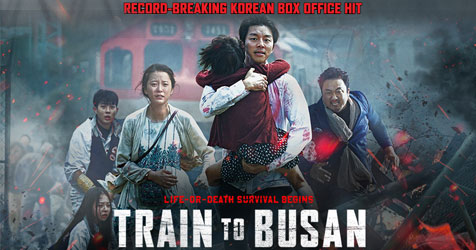 By Carl Slaughter: Every semester for most of the last 15 years, I have assigned my college students in China to make a short speech describing a movie.

In school after school, class after class, enormous numbers of students have identified Titanic, Shawshank Redemption, The Pursuit of Happiness, The Legend of 1900, and Leon the Professional as their favorite movies. But I get a good mix of current movies too.

This semester, three students talked about the Korean zombie film Train to Busan. One of them said, “What we learn from this movie is that the human condition is worse than the zombie condition.” My interest was sufficiently piqued.

Having no taste for zombie munching scenes and not wanting to hunt down English subtitles, I sought Wikipedia for answers.

“Seok-woo, a divorced fund manager, decides to take his young daughter Su-an to her mother in Busan as her birthday gift. They board the a Korean High-speed rail at a station in Seoul. The train is also occupied by the tough working-class husband Sang-hwa and his pregnant wife Seong-kyeong, a high school baseball team, rich but selfish CEO Yon-suk, elderly sisters In-gil and Jong-gil, and a homeless man.”

Without spoilers, some of these people sacrifice themselves for others and some of them sacrifice others for themselves. Reviewers pointed to the subtle social politics and class warfare symbolized by these decisions. One Amazon reviewer described it as Snowpiercer meets 28 Days Later.

I’ve taught English in Korea twice. One of the things about Korean society that made a very good impression on me is the exceptionally low crime rate. Not surprisingly, Korea is a not gun country. So if you watch Train to Busan, look for creative ways to fight zombies.

2 thoughts on “The Train To Busan”