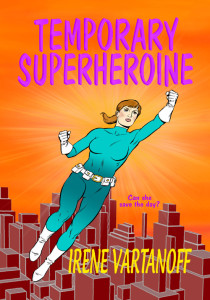 As a teenager she had over 100 fan letters printed in comics, causing such a sensation at DC that Vartanoff was written into several stories for Metal Men and The Flash, all the while a letter column controversy raged about whether she really existed at all. 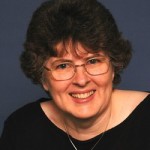 Appropriately, Temporary Superheroine requires a team from the world of comics fans and creators to save the day.

Chloe Cole, struggling webcomics artist, is tormented by crazy dreams, mysterious e-mails, and ominous sightings of a supervillain on the loose. In her dreams, she’s a superheroine. Could those dreams have been responsible for unleashing ultimate chaos? When Chloe goes to New York looking for answers, dreams crash with reality and comic book fiction turns to fact. Driven to undertake a desperate quest, Chloe must unravel the mystery of her parentage while navigating a bizarre mirror universe. Can she and her ragtag team—her comics fanboy ex-boyfriend, an enigmatic and powerful comic book company executive, an elderly comics icon, and an eccentric artist with a grudge against society—possibly be enough to vanquish a fearsome foe?

The book is currently available only in a Kindle edition — with a cover by Marvel Comics artist Bob McLeod.

2 thoughts on “The Vartanoff Legend Continues”