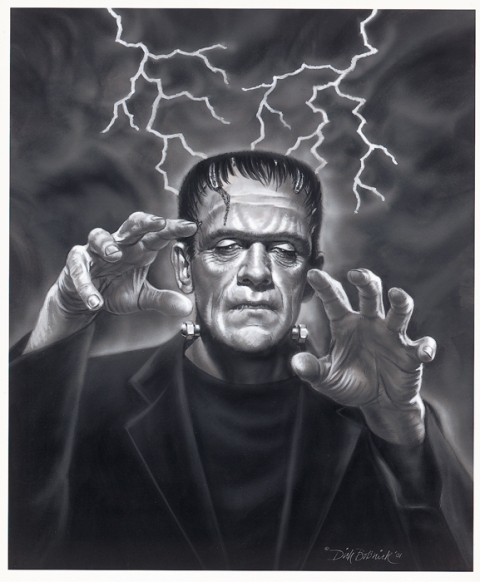 By James H. Burns: Every once in a while, when I’m hanging out with the kids who visit across the street, and we’re playing catch, or football, or tossing around some new licensed product that seems neat (a Superman glider, a Captain America frisbee shield, bubble makers…) —

If they do something aggravating… Well, of course I won’t get mad, but pretending irkishness…

I’ll raise myself up, hold my head still, and flail my outstretched arms, as I go, “Aarrhh…”

The kids, any kids I’ve done this with, always laugh, and/or giggle as they pretend to scoot…

Which means somewhere along the way, Boris Karloff’s performance as Frankenstein’s monster simply entered the universal (no pun intended) subconscious.

By the time I encountered Frankenstein, in 1969 on “Creature Features” in New York on WNEW (nicely hosted by announcer guy, and later radio executive, Lew Steele), the Karloff-Pierce-Whale Frankenstein was too much a part of the popular culture to be frightening. I was more overwhelmed by the fairy tale aspects of the story.

(I wouldn’t be disturbed by the movie until a little over ten years ago, in the home theatre of film-music restoration-producer and movie buff extraordinaire, Ray Faiola, and on a large screen, I saw the pain and hurt and wonderment in Karloff’s eyes.)

But when I’m playing with cats and dogs or sometimes even other of nature’s creatures, and I’ll suddenly be silly, and start – softly — doing the arms bit… They don’t get bothered.

Which kind of means, really, that Karloff was miraculously tapping into some gesture that was known by everyone.

The great secret of Frankenstein, whether it’s Shelley’s college student, or Colin Clive, or Peter Cushing as he’s giving life to Christopher Lee —

And women can already do this, and so miraculously so. In only a relative handful of months.

5 thoughts on “The Waving Arms of Frankenstein”