Three more volumes of Jerry Pournelle’s There Will Be War have been republished for the Amazon Kindle by Castalia House this summer. 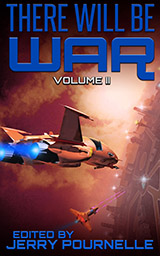 There Will Be War, Volume II (originally titled Men of War), edited by Jerry Pournelle and John F. Carr, has 19 stories, articles, and poems. Notable entries are —

375 pages, no DRM. Can be purchased from Amazon and Castalia House. 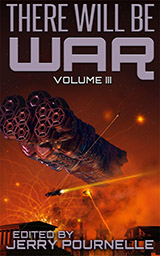 There Will Be War, Volume III (originally titled Blood and Iron), edited by Jerry Pournelle and John F. Carr, and features 16 stories, articles, and poems. Notable entries are —

382 pages, no DRM. It is available at Amazon and Castalia House. 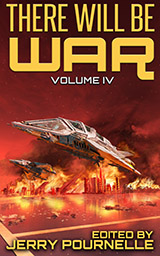 There Will Be War, Volume IV (originally titled Day of the Tyrant), edited by Jerry Pournelle and John F. Carr, features 21 stories, articles, and poems. Notable entries are —

378 pages, no DRM. It is available at Amazon and Castalia House.

I recently read your nice April piece about it nice April piece about [the reprints] and also read the comments which I don’t usually do. There seems to be some question about why Castalia is the publisher. It’s simple, really: they made the best offer. My first inclination for the whole series was to have my agent publish the whole series, but she was reluctant to do the bookkeeping and royalty payments to 20+ contributors per book for ten books; she hasn’t the office staff for that nor the computer skills to automate it.

Neither do I. I haven’t time for all that work and I wouldn’t be reliable or dependable — and it’s the contributors’ money, not mine. I don’t need and can’t do all that work, and I won’t take on the obligation, and no other publisher seemed interested. Then Castalia wanted to publish the 25 year old series, and when I said only if you do the bookkeeping and banking, they said yes; they thought it a prestigious series and they would do that.

When TOR published the original series, I paid the royalties to the contributors, and though John Carr was invaluable help, it was my obligation and I did it; even wrote a computer program to make it easier. Alas, that program is long gone, and if it weren’t I still would not take on the obligation.

Castalia contracted to do all that as publisher. Royalties are coming in, and Castalia is paying them, and I don’t have to do much but collect my share, as it should be.