On July 2, 1959 Plan 9 from Outer Space opened in theaters. Plan 9 is considered by many critics, including Michael Medved, to be the worst film in Hollywood’s history. 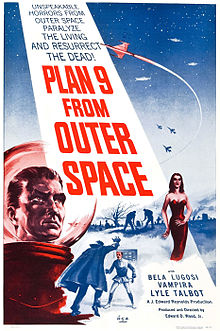 Harlan Ellison recently asked readers of his forum to pick the worst movie ever made, and he warned, “Plan 9 From Outer Space is a true no-brainer, so no one gets any props for throwing THAT ‘usual suspect’ into a competition requiring REAL CHOICES.”

Plan 9‘s popularity as the worst movie ever made actually has prevented it from ranking anywhere near the bottom of quality metrics. For example, Rotten Tomatoes reports that 66% of critics gave the film positive reviews.

In honor of this historic occasion I offer the following four question trivia quiz.

Answers appear after the jump.

The answers are based on information from the ever-authoritative Wikipedia. 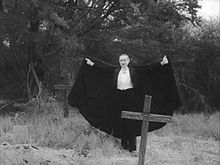 The original title was Grave Robbers from Outer Space

Probably not, since I cannot find such precise information in the Wikipedia or anywhere else. But it is true that when Lugosi died on August 16, 1956 much of the movie had yet to be filmed. Historians say silent footage of the actor actually had been shot by Wood for other, unfinished projects just before Lugosi’s death in 1956 and was repurposed for use in Plan 9.

The film opens with an introduction by Criswell: “Greetings my friends! We are all interested in the future, For that is where you and I are going to spend the rest of our lives! …”.

According to the documentary Flying Saucers Over Hollywood – The Plan 9 Companion (1991) it was a plastic toy. Both a regular version of the toy and a somewhat modified one appear in the film.