A unique occurrence or the start of a trend? SF Signal’s link collection for December 2 includes this entry:

That is, of course, the real name of “James Tiptree, Jr.” I can’t recall seeing Sheldon’s name standing alone before. Even the linked article, about this weekend’s Tiptree symposium at the University of Oregon in Eugene, identifies the writer by both her pseudonym and real name.

Yet SF Signal’s usage of “Sheldon” is not a mistake. And it made me begin to wonder if someday in the future scholars and fans will routinely use Sheldon’s name by itself?

I ran the question past Jeanne Gomoll, long associated with the Tiptree Award as a member of its Motherboard.

Jeanne Gomoll: I will leave for Eugene tomorrow morning and am looking forward to the Symposium … but I think it’s going to feel more like an academic conference than a con to fans. On the other hand, it may also feel a little strange to the academics, especially when the Tiptree Motherboard opens the party Friday night.

At the conference, I expect people to use both Tiptree’s and Sheldon’s names. I tend to use “James Tiptree, Jr” when speaking of her stories and about the public author. But I use “Alice Sheldon” when speaking about the private person and her relationships with people who knew her true identity. It’s complicated, especially when you include her other pseudonym, “Raccoona Sheldon,” but that very complexity is what makes her work so interesting and so appropriate for the award that was named after her. I don’t ever expect “Tiptree” to replaced by “Sheldon” — she will remain ineluctably BOTH female and masculine.

Here is a collage Jeanne designed for the Symposium’s Facebook event page.

The keynote talk will be given by Julie Phillips, author of the biography James Tiptree, Jr.: The Double Life of Alice Sheldon. There will be a panel discussion with other writers who corresponded with Tiptree, including Ursula K. Le Guin, Suzy McKee Charnas and David Gerrold. A panel about the Tiptree Award will be held on Saturday afternoon.

An exhibit based on the Tiptree Papers and featuring the Tiptree Quilt will be in Knight Library. 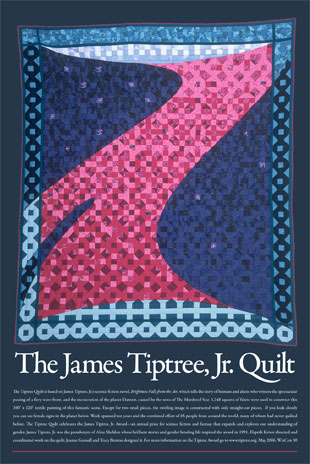 The Tiptree Quilt is based on James Tiptree, Jr.’s science fiction novel, Brightness Falls from the Air, which tells the story of humans and aliens who witness the spectacular passing of a fiery wave-front, and the incineration of the planet Damien, caused by the nova of The Murdered Star. 1,248 squares of fabric were used to construct this 100-[inch] x 121-[inch] textile painting of this fantastic scene. Except for two small pieces, the swirling image is constructed with only straight-cut pieces. If you look closely you can see female signs in the planet below. Work spanned ten years and the combined effort of 65 people from around the world, many of whom had never quilted before. Elspeth Krisor directed and coordinated work on the quilt; Jeanne Gomoll and Tracy Benton designed it.

After visiting London for Jeanne Gomoll’s guest of honor appearance at the 2014 World Science Fiction Convention, the Quilt has been donated to the feminist science fiction archive at the University of Oregon at Eugene.

9 thoughts on “Tiptree or Sheldon?”