By Jeffrey Smith: The University of Oregon held a “James Tiptree, Jr. Symposium” on December 4 and 5 to celebrate (a) the centenary of Alice Sheldon (born August 24, 1915) and (b) its acquisition of the Sheldon/Tiptree papers for the Special Collections of its Knight Library – joining the papers of Ursula Le Guin, Joanna Russ, Kate Wilhelm, Damon Knight, Molly Gloss, Sally Miller Gearhart, Kate Elliott, Suzette Haden Elgin and others.

Attendance was free, so no total count of attendees was possible, but there were about 200 people in the auditorium at the peak. There were some locals and a few students, and a lot of science fiction fans and writers, most of them WisCon regulars. There were several outside-the-field creative people working on projects involving Tiptree who came to get information and hear peoples’ experiences that could help them in their own work (but it’s not my place to announce these). At one point, Nisi Shawl said, “I think I’m the only black person here.” She later found 1 or 2 others, and some Asian and Hispanic, but it was a very white crowd.

The library had four display cases showing photos, letters and other Tiptree memorabilia, another case of Tiptree Award winners, and the massive Tiptree Quilt which had also recently been donated to the University by the Tiptree Literary Award Council.

The Symposium itself was designed to be less like an academic conference and more like a fan convention, and the program items were very successful. The program began with Sheldon biographer Julie Phillips discussing the relationships between Le Guin, Russ and Tiptree, and then students who had been studying in the archives read letters by Tiptree to the other two that had particularly affected them. After the students, Julie read Tiptree’s letter to Le Guin admitting who “he” really was, and worrying that she would be offended and break off their friendship. Then Ursula got up and read her warm, accepting response, bringing much of the audience to tears. An audio production of Tiptree’s “The Women Men Don’t See” was played, and the day ended with tours of the library exhibits led by Linda Long, the University’s Manuscripts Librarian. That night the Tiptree Award hosted a party that was very well attended, including some people who had never been to an sf convention (and thus a convention party) before.

Ursula K. Le Guin reads one of her letters to Tiptree #Tiptree2015 pic.twitter.com/wnOxwS1Ud2

The second day started with a publishers’ panel , with representatives from F&SF, Tachyon Press and Aqueduct Press. Next was the highlight (and best attended) event, three authors talking about writing in the 1970s and their experiences with Tiptree: Ursula Le Guin, Suzy McKee Charnas, and David Gerrold. David told the story of driving uninvited to Tiptree’s address in 1969 and startling a woman who stammered that she didn’t know who he was talking about. Their relationship-through-correspondence suffered after that. Next up was me, her literary trustee, answering questions from students in the 400-level feminist science fiction course and then from audience members. I did a poor job on the abstract questions but pretty well on the more straightforward ones. (Ursula said she learned some things from me that she hadn’t known, so that was good.) (I also had the pleasure at dinner of making her really laugh with stories of misadventures in the funeral education field.)

After me came Alli herself, via some cassette tapes she had recorded. People got to hear her voice, and seemed to most enjoy her take-down of Heinlein’s I Will Fear No Evil. The Symposium ended with a lively discussion of the Tiptree Award, with Pat Murphy describing its founding, past and present jurors describing their experiences, and lots of audience questions.

I had a lot of fun, most of the attendees seemed to have a lot of fun, and the University thought it was so successful that even before it was over they were talking about doing it again next year, with a focus on Joanna Russ.

PS: I asked about the Suzette Haden Elgin situation. Elgin had donated some material to them when she was alive. When she died, many more papers were left in a storage unit, which her husband abandoned rather than continue to pay for. When the University contacted the person who had bought the contents, he said he wanted to sell the papers, not donate them. They haven’t given up hope, but have no real prospects for obtaining them at this time. 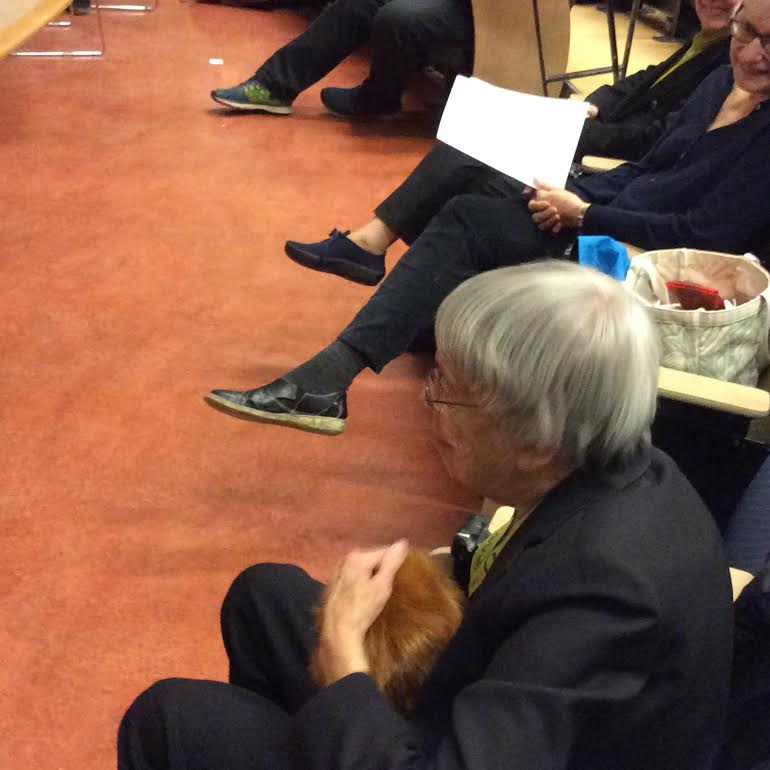 6 thoughts on “Tiptree Symposium: A Report”