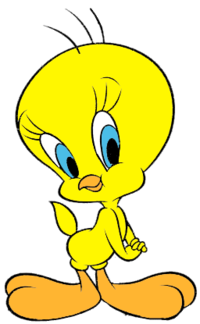 Ransacking the Wikipedia I learned that Tweety was a creation of Bob Clampett. In Tweety’s first appearance he (or she? there’s evidence both ways) was merely a baby bird in an outdoors nest, naked and featherless. (In the documentary Bugs Bunny: Superstar, animator Clampett tells the audience Tweety was based “on my own naked baby picture.”) When Friz Freleng took the character over in 1945, feathers were added to allay the censors. Freleng not only transformed Tweety’s appearance, he made changes in tone and story that turned Tweety into the character we’re familiar with today.

Speaking of purity monitors, for all those concerned that every File 770 post have a connection to science fiction, let the record show that Tweety appeared in Who Framed Roger Rabbit, winner of the 1989 Best Dramatic Presentation Hugo — “accidentally” causing Eddie Valiant (Bob Hoskins) to fall from a pole by playing “This Wittwe Piddy” with Valiant’s fingers and releasing his grip. Which parallels a similar gag in the very first Tweety cartoon, A Tale of Two Kitties. Tweety also had a small role in Space Jam, which definitely wasn’t nominated for a Hugo.