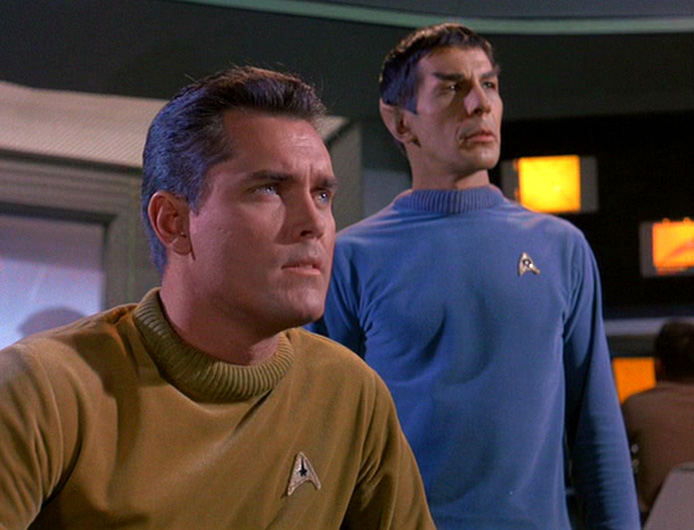 Jeffrey Hunter starred as Christopher Pike, captain of the USS Enterprise. He left the project after NBC rejected “The Cage.” By the time another pilot was commissioned he was gone.

Before Hunter came on board, other actors whose names were floated for the role by NBC or Roddenberry included Efrem Zimbalist Jr., James Coburn, Peter Graves, George Segal, Patrick O’Neal, Rod Taylor and William Shatner.

A Peter Graves captain would have been a very earnest fellow, as he was running the team in Mission: Impossible – he would have turned Kirk into Janeway.

Even though Coburn could play drama, as in The Magnificent Seven (1960), how could audiences believe he was playing it straight after Our Man Flint (1966)?

George Segal could play anything – in the mid-Sixties he had roles in King Rat, Ship of Fools and Who’s Afraid of Virginia Woolf? — why would he settle for TV?

Rod Taylor (The Time Machine, 1960), I believe, would have played Captain Kirk fairly similarly to the way William Shatner did, so no great difference there.

Efrem Zimbalist Jr. is the alternate choice I find most intriguing. He was able to move between drama and comedy with full credibility – from Maverick’s Dandy Jim Buckley to Stuart Bailey in two different detective series, and The FBI’s  Inspector Lewis Erskine. He would have brought an extra something to humorous episodes like “A Piece of the Action” and still had the gravitas for heart-wrenching stories like “City on the Edge of Forever.”