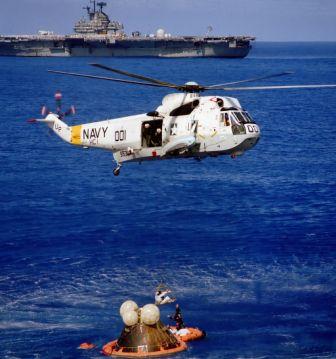 December 19, 1972: The splashdown of Apollo 17 marks the end of the United States’ manned moon exploration program.

The Apollo 17 spacecraft landed in the Pacific Ocean at 2:25 p.m. and soon after Commander Eugene Cernan, Command Module Pilot Ronald Evans, and Lunar Module Pilot Harrison Schmitt were picked up and flown by helicopter to the recovery ship U.S.S. Ticonderoga.

Although that closed the first chapter in the history of manned space exploration, it is not the most famous fact about the mission.

As Apollo 17 was en route to the Moon, the crew took a photo of the Earth from space that became known as  “The Blue Marble” photo.  NASA archivist Mike Gentry has speculated that may be the most widely distributed image in human history. 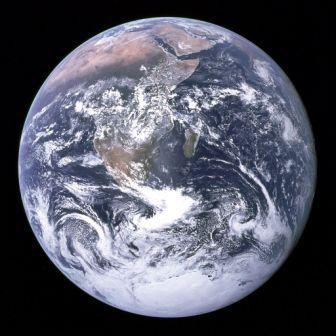 Ironically, the photo is such an icon that it was even used in the 1995 Tom Hanks film Apollo 13 — every time the crew looked out the window that was the view, a photograph taken by Apollo 17. (This, despite there being photos of Earth actually taken by Apollo 13.) 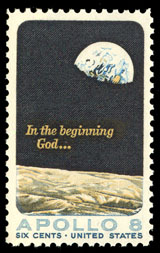 The “Big Blue Marble” should not be confused with the famous “Earthrise” image taken by Apollo 8, and used in a 1969 stamp commemorating the mission.

Apollo 17 is also notable for furnishing pop culture with a couple of fictional characters. One-time astronaut Steve Austin of The Six Million Dollar Man (based on the 1972 novel Cyborg) is described in the book as watching the Earth “fall away during Apollo XVII” – indicating he was aboard the spacecraft. Likewise, in Deep Impact (1998), the President calls Spurgeon “Fish” Tanner, portrayed by Robert Duvall, the “last man to walk on the moon,” implying he was a crew member.