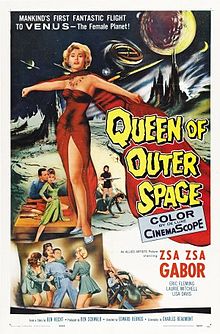 Queen of Outer Space with Zsa Zsa Gabor opened this date in 1958. It’s a movie in which Earthmen are captured on Venus while trying to sell bicycles to fish. Or something like that.

The script was written by Charles Beaumont from an outline by Ben Hecht – both famous today but not for anything they wrote for this movie. Hecht was entering the last decade of a career in which he’d earned the nickname “the Shakespeare of Hollywood” by scripting hits like The Front Page and Mutiny on the Bounty. Beaumont later wrote several classic Twilight Zone episodes and the screenplay for 7 Faces of Dr. Lao.

Those with a fine eye for such things will be interested to know that Bill Warren’s Keep Watching the Skies: Science Fiction Movies of the Fifties, Vol. II, 1958-1962 says Queen of Outer Space recycled costumes from Forbidden Planet like the C-57D crewmen’s uniforms and Altaira’s wardrobe. It also reprised models, sets, and special effects from Bernds’s World Without End, and a model rocketship from Flight to Mars.