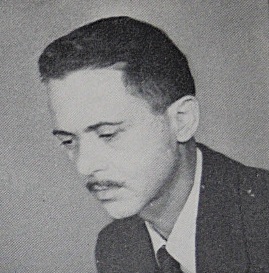 By Stephen Haffner: [Reprinted with permission.] One hundred years ago today (April 7, 1915) Henry Kuttner was born in Los Angeles, the youngest
of thee sons of Henry Kuttner, Sr. and Annie Levy. Kuttner was five years old when his father died and he relocated to San Francisco.

A reader of the early fantasy magazines, he had letters published in issues of  Air Wonder Stories and Weird Tales. Prior to completing high school, he returned to Los Angeles and eventually worked as a reader for the literary agency of his uncle Laurence D’Orsay.

During his correspondence with H.P.Lovecraft, he sold his first story, “The Graveyard Rats”, to Weird Tales in early 1936 (preceded in print by the poem “Ballad of the Gods” in WT, Feb. ’36). Kuttner continued to sell prolifically to the pulp magazines, appearing in Thrilling Mystery, Weird Tales, Marvel Science Stories, Strange Stories and more under a plethora of pseudonyms. Before moving to New York in 1939, he mentored two future giants: Leigh Brackett and Ray Bradbury.

Following brief visits—and a lengthy correspondence—with Indianapolis-based Catherine L. Moore, the two were married in New York on June 7, 1940. Singly, and in collaboration with Moore, this marks the beginning of Kuttner’s longest sustained output of high-quality work with: “The Twonky,” “Mimsy Were the Borogoves,” “Nothing But Gingerbread Left,” “Housing Problem,” “Call Him Demon,”; the “Gallagher series,” the “Baldy” series, the “Hogbens” series, and novel-length works such as Fury, Earth’s Last Citadel and The Dark World.

When World War II saw Robert A. Heinlein depart for Philadelphia, the Kuttners rented the Heinlein’s Hollywood home. In 1942, Kuttner entered the Army Medical Corp (serving at Fort Monmouth, NJ until 1945) and Catherine lived in nearby Red Bank, NJ. After Kuttner’s discharge, they lived in Hastings-on-Hudson, NY until moving to Laguna Beach, CA in 1948.

Feeling burned-out with their prolific fiction output for the pulps, they branched out into novels starting with The Brass Ring (Duell, Sloan and Pearce, 1946). In 1950, Kuttner & Moore curtailed their fiction writing to focus on their new academic efforts at the University of Southern California. Kuttner earned his bachelor’s degree in 3½ years and Moore completed hers in 1956 (she earned her master’s in 1963). Kuttner was working on his master’s thesis on the works of H. Rider Haggard at the time of his death from heart failure on February 4, 1958.

It was while working on their degrees that Kuttner & Moore added teaching at USC to their resumés, as well as their first screenplay work at Warner Bros. on Rappaccini’s Daughter. Following Kuttner’ death, Moore took over Kuttner’s teaching duties, as well as handling screenwriting jobs for Maverick, Sugarfoot and 77 Sunset Strip. Some of this under the eye of former Amazing Stories editor, Howard Browne.

[Editor’s Note: And now that you’re thinking about Henry Kuttner, here’s a great opportunity to read a batch of Kuttner stories. Quoting from the press release….]

Haffner Press is very pleased and proud to be able to collect and re-present the work of Henry Kuttner (DETOUR TO OTHERNESS, TERROR IN THE HOUSE, THUNDER IN THE VOID) and we hope to have you with us we continue to publish the work of this excellent writer: THE MICHAEL GRAY MYSTERIES, HOLLYWOOD ON THE MOON/MAN ABOUT TIME and  . . . 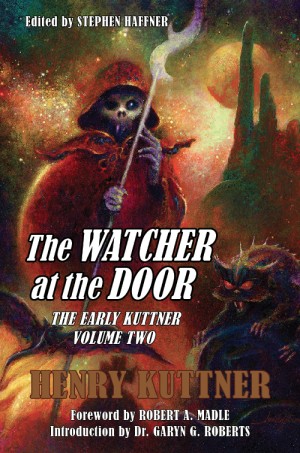 Coming later this year is the long-awaited follow-up to TERROR IN THE HOUSE: THE EARLY KUTTNER, VOLUME ONE is the second volume of early Kuttner: THE WATCHER AT THE DOOR.

We are taking preorders now for this title. Even better for those of you that missed on getting a copy of Volume One: for a limited time, we are offering the out-of-print TERROR IN THE HOUSE as a combo with preorders of THE WATCHER AT THE DOOR. It won’t be cheap, but it will be easy. See the homepage for the combo offer at www.haffnerpress.com.