Jim Henson was the beloved creator of the Muppets. However, an entirely different universe and collection of characters led him to attend his first World Science Fiction Convention.

The Dark Crystal, which Henson co-directed with Frank Oz and co-wrote, was released in 1982. The movie’s creatures and characters were based on the conceptual artwork of Brian Froud.

Jim Henson and producer Gary Kurtz promoted the film at Chicon IV, the Worldcon held in Chicago in September 1982.

Curiously, what is misidentified on The Dark Crystal “Making of” page as a photo from the 1982 Worldcon (below), actually is from a 1983 ceremony in France. Craig Miller, who worked on the film’s convention PR, verified that Froud did not attend Chicon IV. The correct identification (repeated below) comes from an entry at Jim Henson’s Red Book. 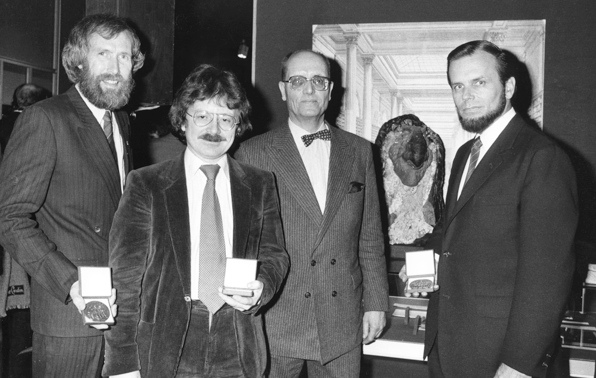 Jim Henson, Brian Froud, a French official, and Gary Kurtz at the “Exposition de Cristaux Geants” in Paris, 1983. Between the official and Kurtz is a Skeksis, a creature from The Dark Crystal.

Also released in 1982 was The Dark Crystal computer game by Sierra Online — a re-creation is available for free play here.

(And Taral will appreciate it if I mention that his beloved Fraggle Rock, another Henson project, started shooting that same year in Toronto.)

Henson came to the Worldcon again in 1983, when it was held in Baltimore. Henson made a presentation about The Muppets Take Manhattan, then fielded questions about the Muppets and the world of The Dark Crystal. Henson spent some time wandering around the convention afterwards.

Although Henson did not come to the 1984 Worldcon, his presence was still felt. Two entries in the L.A.Con II masquerade re-created characters from The Dark Crystal. The following year, a participant had the chance to show him a folio documenting the presentations, and got back a nice letter about them. 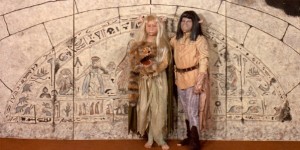 Just like those costumers, many creative people were and continue to be inspired by Henson’s artistic vision.