When Atwood accepted a Lifetime Achievement Award at the Canadian Booksellers Association a few years ago she revealed she was a pioneering self-published author:

My own bookselling activities began in 1961, when, together with a friend, I hand–set my first poetry collection and printed it on a flatbed press. It had seven poems, and we didn’t have enough a’s, so we had to disassemble each poem before we could set the next one. The cover was printed from a lino–block, and the pages were rubber–cemented in—a mistake, as the rubber cement dried out shortly thereafter and the pages fell out. We made 200 copies of this book—wish I’d kept more of them, considering the increase in value—and went around to bookstores in Toronto, which were all indies then, except for Coles, which didn’t sell many Canadian books anyway. Some of the booksellers were kind enough to let us put these little books of mine on the magazine rack, where they sold for 50¢—we wrote the price on with a pencil. So that was my first bookselling adventure

In July 2012 Atwood was one of the writers who came to Comic-Con and spoke at a memorial for Ray Bradbury. She had never met Ray and was supposed to visit him on her trip to California, but that was not to be. She talked about how she read, as a young girl, Ray’s books as they first came out. That she used some of his themes in her books. In The Handmaid’s Tale she used that women were not allowed to read because of Fahrenheit 451. 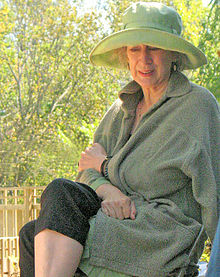