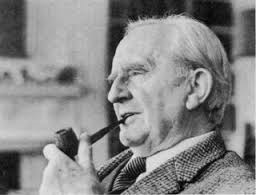 Brendan N. Wolfe’s article “Tolkien’s Translation of Jonah” in the current issue of the Journal of Inklings Studies makes available for the first time the original version of the translation of Jonah he produced for the Jersualem Bible. (Subscription required.)

An earlier plan to publish the original translation in 2009 was canceled for reasons unknown.

Published in 1966 just after the Second Vatican Council, the Jerusalem Bible was a translation of the Holy Scriptures created for Roman Catholics. And as the Journal’s editor Dr. Judith Wolfe explains, Tolkien’s contribution was subjected to editing before it saw print:

The version of Tolkien’s translation that was eventually published in the Jerusalem Bible was not the author’s original submission, but a collaborative effort, heavily edited by a style editor who had been employed to standardize the grammar and vocabulary of the various translators who had contributed to the Jerusalem Bible.

With kind permission of Tolkien’s Estate, the Journal of Inklings Studies is now able to make available Tolkien’s original translation from Bodleian Manuscript. A research article by Brendan Wolfe on the history and features of the translation will accompany the text.

Contrary to what I would have expected, Tolkien did not translate Jonah from an ancient language but from French, according to J.R.R. Tolkien Encyclopedia: Scholarship and Critical Assessment edited by Michael D.C. Drout.

Because of time, Tolkien accepted the book of Jonah, which he then seems to have translated from French. [Father Anthony Jones, head of the translation project] then checked it against the Hebrew and Green and revised it. Jones’s initial invitation assures Tolkien more than once that knowledge of the languages was not necessary…. Jones makes it clear that he was inviting Tolkien onto the board because of Tolkien’s expertise in English philology and because Jones was taken with The Lord of the Rings, not because of any supposed expertise in Hebrew on Tolkien’s part.

It will be interesting to discover what Brendan N. Wolfe has to say on that score.

Readers have long known that the Jerusalem Bible’s version of Jonah makes no reference to a whale. The text reads:

2:1 Yahweh had arranged that a great fish should be there to swallow Jonah, and Jonah remained in the belly of the fish for three days and three nights.

This, at least, matches the interpretation Tolkien discussed with his son Michael in a 1957 letter:

Incidentally, if you look at Jonah you’ll find that the ‘whale’ – it is not really said to be a whale, but a big fish – is quite unimportant. The real point is that God is much more merciful than ‘prophets’, is easily moved by penitence, and won’t be dictated to even by high ecclesiastics whom he has himself appointed.

Tolkien’s other work on the Jerusalem Bible included revisions of the English translation of Job done by Andrew Keeney. However, Tolkien insisted in a letter that Father Jones gave him too much credit overall for his role in the project.

Naming me among the ‘principal collaborators’ was an undeserved courtesy on the part of the editor of the Jerusalem Bible. I was consulted on one or two points of style, and criticized some contributions of others. I was originally assigned a large amount of text to translate, but after doing some necessary preliminary work I was obliged to resign owing to pressure of other work, and only completed ‘Jonah’, one of the shortest books.